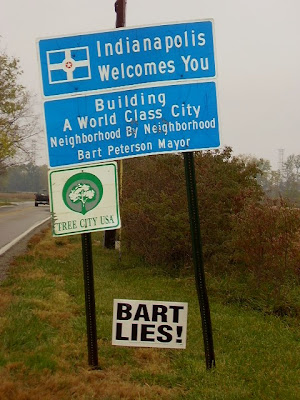 Our favorite blogmistress draws attention to the campaign ads Bart Peterson's campaign has been running on television as of late, which are now uploaded to YouTube. "Good stuff, especially when you consider he's running solo in this media market," she writes. I would never underestimate the ability of campaign consultants to write purely fictional ads for their candidate, which this latest series of ads represent. Sorry, Mayor Peterson, you didn't help those United Airlines maintenance workers as your latest ad falsely claims. You created a burial ground for them. No, you didn't convince Gov. Daniles to order a reassessment in Marion County. And frankly, I don't know with what Dawn Briggs is being rewarded to make those comments, but I know her views are completely at odd with many of her neighbors in Irvington.

The blogmistress can't make up her mind whether Ballard is just a "dumb" loser who nobody knows or a "vapid mudslinger" as she describes him today. "Vapid" is just a snarky way of saying "tasteless" if you were wondering. One day he's a racist, and on another day he's producing amateur campaign ads. Whatever works, right? I suspect the blogmistress is simply reflecting the unrest within the Peterson campaign from the afterglow of Mary Beth Schneider's biographical piece on Greg Ballard this past Sunday, The Marine Who Would Be Mayor. The truth is a stranger in the fictional world in which Bart Peterson and his supporters pretend we live.
Posted by Gary R. Welsh at 7:08 PM

Brian Howey was right. Jen Wagner is the nastiest woman in Indiana politics.

I am an ex-Irvington resident who moved out after being robbed. The police did nothing. The police indicated that they knew who was doing the burglaries, but they would be right back on the streets due to jail overcrowding. Now hookers and drug dealers freely walk the streets in my old neighborhood, and are only outnumbered by for sale signs. It pains me to see it.

If anything gets done in Irvington, it's only because Peterson's little lapdog O'Connor lives there. I won't read Jen's Blog to see what Dawn had to say, but it suffices to say that she has to support him because of the promient D's that live in Irvington and because she doesn't want to give up the tablescraps that the city calls economic redevelopment. She means well, but she doesn't speak for the community.

Irvington needs help, not the window dressing that this Mayor will give it. And to think Irvington is one of the better-off neighborhoods in town.

Brian Howey as a barometer of what's correct in Indiana politics? Puh-leeeze.

And, for the record, as a former journalist, Ms. Schneider's article should've been labled news analysis...it was not news. It was a puff piece, pure and simple. Kinda rare for her, but hey, it's Gannett now, a/k/a McNews.

The blog-o-philes are only as threatening as you allow them to be. To me, they're just people with opinions. And some times their opinions are so malicious and one-sided, they make me politically head in the opposite direction. Wilson has opened my eyes as to how biased an individual can be toward their party: to the point of blindness.

I believe now more than ever I am truly non-party affiliated. Now depending on your views, people will disagree with that. If you share a couple of views as them, you're in their party and they'll stick a yard sign in you to prove it. If you disagree with a view, you're a "nutjob", "wingnut", blah, blah, blah...

Politicians and their followers in this town seem to behave like Junior High kids. It makes it hard not to stoop to their level. I asked Jen an honest question over on her blog and the ONLY thing she got out of it was that I called a lady "Mel-jack". My point was proven in that instant. And maybe I shouldn't care so much. Doesn't make her nasty, just proves my point about the local political scene.

I think that this sign is in poor taste........but then what would you expect from Ballard.

"It was a puff piece, pure and simple. Kinda rare for her, but hey, it's Gannett now, a/k/a McNews."

So it's a puff piece because Schneider couldn't find anyone who would say anything bad about Ballard in their experience working with him? Is it possible he's a competent, well-accomplished person who is liked by people who know him?

I think when Democrat blogs go after Ballard you can consider that a good sign for Ballard and a bad sign for Mayor Peterson.

If the Democrat blogs are posting anti-Ballard statements I would say that's a good sig for Ballard and a bad sign for Mayor Peterson.

"I think that this sign is in poor taste........but then what would you expect from Ballard."

Your ignorance speaks volume. If you paid any attention to local politics you would know that Ballard has nothing to do with either sign.
Mayor Peterson is responsible for the big blue lie.
Hoosiers for Honesty in Government PAC are responsible for the little white sign that projects the truth.

Poor taste? The definition of poor taste is Bart Peterson.

This Democrat attended the Indiana Equality meeting tonight at United Methodist Church up on 38th st, and after listening to my Democrat At-large councilors rationalize and justify their tax increases and defense of ethically challenged members of the caucus, and upon hearing the challengers refute the information they presented, well- I'm voting for Macguire, Malone, and Hegg. These 3 are definitely more in touch with the communities concerns and remedies for the past few years of my councilors behavior and legislation, sad to say.

Not a World Class City by any means....in fact, we're now being called South Detroit!!!

An expert has stated that we are WORSE than Detroit was during the height of its corruption, that caused all the working people to flee the county for Macomb & Oakland County in Michigan!

Get off this blog Wilson!
flipper

The Anonymous Coward at 8:31PM Wrote:

"Ms. Schneider's article should've been labled news analysis...it was not news. It was a puff piece, pure and simple."

I'm still shocked MBS's column made it past Ryerson's desk. I thought the only decent person still working at the Rag was Gary Varvel.

No, Gary, it was a puff piece because:

It contained opinions, not just Q/A

It contained no new news

It had a sensational headline on a news page, above the fold, was not labled "news analysis" or "opinion," and brought nothing new to the scene.

It was, and is, a puff piece. Ballard's a nice guy, bright, and could get elected. I doubt it, but he could.

Schneider has resorted to this kind of writing before. It's intellectually lazy, ala Tully, and avoided the tough questions whose answers we needed to hear.

Where, Mr. Ballard, would you get the authority to undo the police merger, as you have said you'd do?

And about forty attendant and subsequent questions.


And: exactly which positions/programsd would you cut to reduce the budget?

This article's writing was far from heavy lifting.

anon 3:26, yes it contained opinions--opinions of people who know him. That's the nature of a biographical sketch. Schneider put a lot of work into the feature story, tracing his roots and interviewing people who knew him along the way. If the story had included a superior who criticized his work and said he wasn't up to the job, you would be heaping praise on Schneider. You can't stand the fact she learned what a solid, accomplished man he's been. You are into slash and burn politics like so many of your Democratic counterparts. Don't blame Schneider for discovering who Greg Ballard is.

Mary Beth Schneider's article was a personality profile on a man running for mayor whose background and competency is largely unknown. It was not intended to nail down his positions or action plan.
Mary Beth did not insert her own opinion into any of it ... she merely cited the opinions of others. Perhaps the article's only fault was to not present the opinions of one or two of his critics, but perhaps she couldn't find any.
Overall, it was illuminating and insightful as to Ballard's background, nothing more, nothing less.

ATTENTION 25th floor:
Here is a challenge from Hoosiers For Fair Taxation.

Can anyone from Mayor Peterson's staff or the democratic party tell the people of Indianapolis what promises Bart Peterson kept during the nearly 8 years he has held office and back it up with documentation? We want to give Peterson a fair shake to show the tax payers he worked in their best interest during his two terms.

The Mayor is fixing the CSO's as prmised (after Goldie wasted $1 Billion by not fixing them). There you go.

HFFT, I would simply like an explanation of why, if the safety pensions have been this long, long standing issue, why Peterson is only dealing with it in his 8th year in office. It certainly appears that he wanted to seize the opportunity to raise the COIT -- at the time thinking no one was really paying attention -- and put it behind the guise of safety.

We cannot answer your question. We suggest that you call the mayor's office, but do not expect a return call. His office ignores citizen complaints and questions unless the media is there, in which case, he then tries every trick in the book to avoid us.

Goldsmith left the public safety pension fund in a huge deficit. Peterson has chipped away at it each year but the baby boom generation is retiring and the deficit was huge for the next few years. Too bad that Goldsmith spent the money for pensions on operating expenses so it he could brag that the didnt raise taxes.....but he did it at the expense of the retirement of police and firefighters.