Schellinger And Thompson Face Off 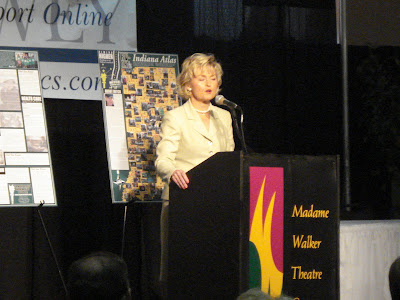 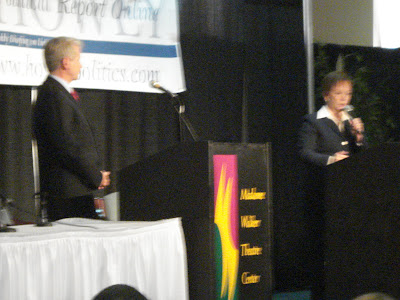 Democratic gubernatorial contenders Jim Schellinger and Jill Long Thompson faced off today in one of their first joint appearances at the HPR Forum at the Madame Walker Theater. The two candidates were totally polite to one another as they set out to distinguish themselves as the best candidate to challenge the re-election of Gov. Mitch Daniels. They reserved their harshest words for him. Here are some highlights:
Lt. Gov. Becky Skillman put in an appearance for the Daniels' administration and delivered a positive message, highlighting the administration's successes in stark contrast to the dark picture painted by the Democratic candidates. Audience members were hoping to be teased with some of the details of Gov. Daniels' property tax plan, but Skillman didn't give anything up. Most of the media bugged out early to attend a briefing by Daniels' staff, skipping Skillman's speech.
Posted by Gary R. Welsh at 6:32 PM

Hearing the promises that JLT and the 800 pound gorilla made to the audience reminded me of those student body elections back in junior high school. When they gave their speeches all the candidates promised more convocations, better cafeteria food, prettier cheerleaders, etc, etc, etc, knowing full well that they were completely powerless to implement any of those things. That didn't stop them from making those promises, though, because they figured that was what they were supposed to say. Much like today when we are promised a "world-class school system" and "higher wages for workers". It's all just so much rah-rah feel-good bullshit that panders to what candidates think the voters want to hear. That's why it's so refreshing to have somebody like Mitch Daniels come along who tells it like it is and uses his brains to tackle tough problems without worrying about the potential political fallout. On the other hand JLT has lost more elections than she has won and the gorilla is totally devoid of any ideas other than that he wants to be governor. And they have the nerve to talk about failed leadership?

He attacked Gov. Daniels "my way or the highway" approach to governing (a phrase I used to describe Gov. Daniels in a Nuvo column last year.

That phrase was also used to describe Gov. Daniels by Jack Colwell of the South Bend Tribune nine months before your Nuvo editorial.

Jack Colwell is a good political writer, anon 6:51. And it was a column, not an editorial.