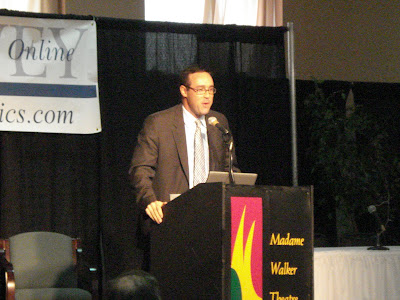 Blogger Chris Cilizza of the Washington Post's The Fix shared his thoughts with attendees at yesterday's HPR Forum on how Indiana's 2008 congressional races are shaping up. Indiana's 2nd, 8th and 9th congressional districts were among the most expensive and closely watched races last year. Cilizza is going to be paying close attention to the fourth match-up in as many elections between U.S. Rep. Baron Hill (D) and former U.S. Mike Sodrel (R). He believes the race will be extremely close, in part, because it is a presidential election year and the district generally votes heavily for the Republican presidential candidate. Cilizza thinks Rep. Brad Ellsworth is a perfect fit for the 8th District and shouldn't have any problem getting re-elected. He also doesn't see any early signs of trouble for Rep. Joe Donnelly.
Cilizza made no mention of Indiana's 7th District, which as we now know wound up being one of the closest of the contested congressional races in Indiana last year, although the GOP candidate, Eric Dickerson, received no support from the national or local GOP. My sources tell me Rep. Julia Carson's health problems are much more serious than is being reported by her staff. For reasons that are not all together clear to me, her staff is withholding that information until after this November's election when it will be announced she is not seeking re-election. If these sources are true, it is completely unacceptable that her staff has withheld this information from the public. It's even worse that our local news media has allowed them to get by with it. I put a bug in Cilizza's ear about what is going on in the 7th. Let's see if he starts following it a little more closely.
I should add I had an opportunity to meet Nels Ackerson, Democratic candidate for the 4th congressional district challenging Rep. Steve Buyer (R) at yesterday's HPR Forum. Ackerson posted impressive fundraising results in his most recent campaign finance filing with the FEC, outpacing the incumbent. On personality alone, Ackerson has Buyer beaten by a mile. This is a Republican district, but Ackerson's candidacy should not be easily dismissed because of Buyer's increasing tendency to create his own controversies.
On Indiana's governor's race, Cilizza sees it as one of the most competitive in the country. "Daniels' job approval ratings are only so-so and Democrats believe they can build on the gains they made in 2006 by taking back the governor's mansion in 2008," Cilizza writes on his blog today.
Posted by Gary R. Welsh at 7:04 AM

just have hillary and jlt at the top of the ticket and see if the dems gain anything in indiana. i think after yesterday, daniels is going to start looking better and better.

As for Carson - will it be a question of when did you know and why did youw ait so long to inform the public ? Waiting 3 months or longer is unacceptable.

I wish the GOP would quit slobbering on themselves when they talk about Julia's health problems. If and when she retires, it will remain a Democratic seat..............

I am pretty sure a Mr. Wilson would say the VOTERS allways decide - and who knows how the voters will vote. Nothing is a sure thing.