Saying Goodbye To My Father 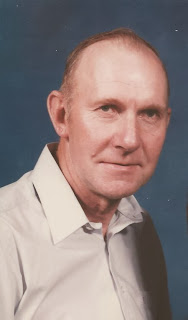 My father, Ray Allen Welsh, peacefully past away last night at his home in Marshall, Illinois with our family surrounding him. He was 83. I am so thankful that I was able to be at his side, along with my mother, brothers and sisters, even if my last moments with him were relatively brief, just to say goodbye one last time. The harsh affects of cancer that he had successfully beaten several years earlier were really starting to take their toll on him. He died quickly as he wished, not wanting to be dependent on others for his care or wasting away in a nursing home.

My father was one of the hardest working persons you would ever meet, but he always had time for his family. He was the youngest of six children and his father died when he was only two years old. His mother did an extraordinary job raising six children and holding the family farm together during the Great Depression. He studied agriculture at the University of Illinois for awhile before being drafted into the U.S. Army where he served during the Korean War. He met and married my mom a few years after he began farming with his brothers and raised five children with her.

He retired from farming a few years ago and enjoyed sharing coffee with old friends every morning and hanging out at the local VFW post and playing cards. He was an avid sports fan who particularly enjoyed attending all of his grandchildren's sporting events. It's hard to believe that he was able to attend his last ISU basketball game only last weekend where my nephew is playing his last season.

He will always be remembered for his consistent positive outlook on life, unswerving loyalty to his wife and family and charitable giving to others less fortunate than him. We're all going to miss him a great deal, but we are content knowing that he lived his life as fully, happily and honestly as can be expected of any human being in the eyes of our Lord and always treated others with the greatest respect.
Posted by Gary R. Welsh at 4:07 PM

Celebrate his life Gary with friends and family!!! I understand a loss of a parent. A touching and beautiful tribute to your father...

I'm so sorry to hear of your loss. This is a poignant eulogy. It does sound like he had a life well lived.

My sincere condolences are expressed to you and your family.

My condolences, Gary. Losing a parent is never easy.

Gary, I am sorry to learn of your loss.

Very well written. What a tremendous tribute. Thank you for sharing and we are saddened by your loss. Prayers to you all

Good man. Good family. Nice to read this peace about good folk in the world. Condolences to you and yours.
I'm sure your father is proud of your writings. Keep it up.

Gary,
I'm very sorry for your loss. Your father seems like he must have been a great man. My thoughts are with you and your family.

I lost my father in 2009, and the amazing thing is that even though he's gone...he's still with me.

Again, my best to you and your family in this tough time.

Its so very sad when we lose beloved parents. A rite of passage I suppose. But how many other events bring grown men to tears. I'm so sorry for your loss. Mike

My sincerest condolences to you and your family.

Thanks for sharing your kind comments.

My condolences to you and your family. Ray would always stop me and want to talk about land values and whether or not we had any land auctions coming up anytime soon. I always enjoyed talking to him. Ray was a great man and raised a great family.

Gary, I am so sorry to hear about the loss of your father. Hold all your memories of him close as he will always be with you.

My sympathies to you and your family.