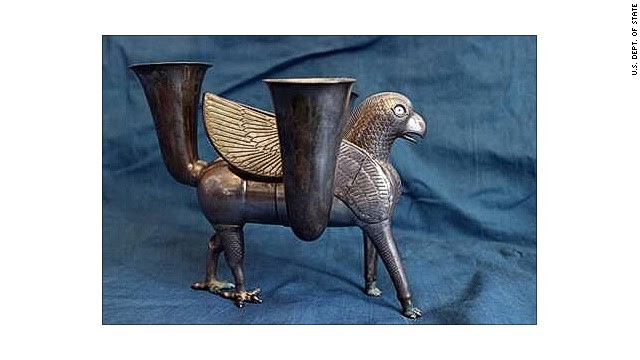 Late last month, a CNN news report hailed the return of a 2700-year old silver chalice to Iran by the Obama administration as "a new token of friendship between the United States and Iran, at least that's the way Iran's cultural heritage chief sees it." "Whatever the case, Mohammad-Ali Najafi was palpably delighted Friday to see the ancient Persian artifact return to its homeland," CNN reported. According to CNN, the chalice had been stored in a U.S. customs warehouse for a number of years after an arts dealer allegedly tried to smuggle it into the country in 2003. The return of the relic coincided with President Barack Obama's phone call to Iran's President Hassan Rouhani, the first time a U.S. president has spoken to his counterpart since 1979. There's only problem with the CNN story. The so-called relic is a fake and the U.S. government should have known it was a fake artifact if it followed up after the arts dealer who brought it into the country claimed it originated from Syria, not Iran.

According to Tablet Magazine, the bad fake was probably created in 1999. This conclusion was made by Oscar White Muscarella, a retired curator for the Met in a publication several years ago. It was purchased by a wealthy New York arts collector after it showed up in a gallery in Geneva in 2002. The arts collector is a trustee of the Met. Three experts were found to authenticate the relic after the arts dealer questioned its authenticity. Homeland Security officials arrested the arts dealer and seized the piece after he identified its place of origin as Syria. The arts dealer paid a $5,000 fine, and the arts collector got his money back. The piece was then sent to a Queens warehouse to be stored until it was recently dusted off and returned to Iran as part of an effort by the Obama administration to improve relations. "While the artifact was inaccessible to scholars and other investigators, a single photograph made available to Muscarella convinced him that it was a fake," the Tablet reported. "Indeed, anyone with passing familiarity with ancient Near Eastern art, or any kind of art, would become suspicious at the merest glance."
Posted by Gary R. Welsh at 7:44 AM

That's okay. the love shown was probably fake too. Just like the relic, it's hard to tell what's authentic.