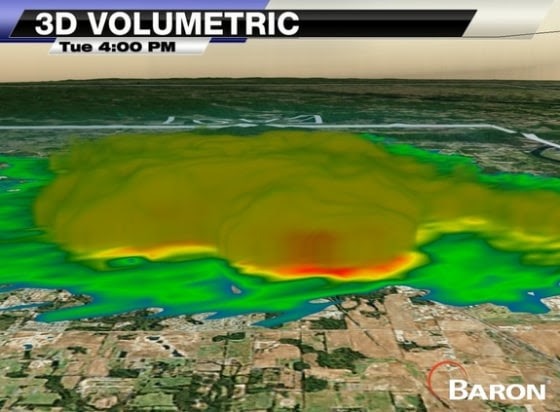 The Indianapolis Star website had an online story the other day showing images of the man-made chemtrails crisscrossing the Indianapolis skyline (as frequently occur) and used it as an opportunity to poke fun of those of us who are intelligent enough to distinguish the difference between normal jet contrails and the chemtrails created when military planes deliberately spray metal agents into the earth's lower atmosphere to create layers of thin clouds that can literally block out the sunlight on an otherwise perfectly sunny, clear day as part of our government's HAARP weather modification program. In case you haven't noticed, these metal toxins that are sprayed into the atmosphere wreak havoc on human respiratory systems, leaving aside what harm they cause to the environment as the metal agents settle in the soil and our water supplies and makes their way through the food chain. It's what happens when the people who run our government begin to believe they are God.

Chalk this up to one of the rare exceptions in mainstream news reporting today when the truth comes to light. Earlier this summer, weather radar detected what appeared to be a strong pop-up storm over Huntsville, Alabama. Local meteorologists worried that they had missed something, but when they checked the weather outside they found no precipitation for hundreds of miles around. After months of speculation and various conspiracy theories, the scientific community and the military have finally come clean and admitted the man-made hand in creating the unusual weather radar blob. They were spraying aluminum-coated silica into the atmosphere as part of a military test to create man-made clouds that can confuse radar-guided missiles:


They found the blob was not nature-made, after all, and was likely so-called military chaff, or reflective particles used to test military radar.

"What we were able to see from the dual-pol radar data looked similar to military chaff cases previously, but the primary difference was that the winds weren't blowing the stuff away," Havin said. "The releases were happening primarily below 3,300 feet (1,000 meters) above the ground and the low-level winds that afternoon were almost nonexistent (less than 3 mph (4.8 km/h)), so the chaff was basically pluming outward over a good portion of the Huntsville metro area."

In fact, the chaff was visible on their radar for more than nine hours, and the news stories lingered even longer.

"Officially, Redstone Arsenal disclosed that it was a military test using RR-188 military chaff," Havin said, referring to aircraft used to spread a cloud of aluminum-coated silica in the case of RR-188.

The cloud can confuse radar-guided missiles, for instance, so they miss their targets.

"My goal was just to show in greater detail how the weather that day was causing things to look the way they did with the chaff release," Havin said of his talk at the NWAS meeting.

On a related subject, since our own government was caught red-handed staging sarin gas attacks in Syria and trying to blame the attacks on the Syrian government as an excuse for starting another war in the Middle East to depose a government in that region that is not under the control of the CIA, we should take note of the fact that in our neighboring state to the south in Kentucky this week there was a report of a sarin gas leak at the Blue Grass Army Depot in Lexington, Kentucky.


Crews at the Blue Grass Army Depot detected a chemical weapon leak Monday within one of the storage igloos at the base. The vapor leak of the GB round was contained within the igloo and was not detected in the air outside the structure, according to a news release from Blue Grass Chemical Activity spokesperson Jana Felts. The release was detected by a mobile monitoring laboratory during routine analysis of the atmosphere within the igloo, Felts said in the release. A powered filter has been connected to the igloo to ensure the leak does not enter the outside atmosphere, she added. Felts said the next step to ensure safety is to determine which round in the igloo has developed the leak. It will then be "overpacked," or placed within a larger, sealed container. The leaking munition then be moved to a separate igloo, and follow-on monitoring will be conducted, she said. GB, also known sarin, is a nerve agent that is stored at the Blue Grass Army Depot along with VX and mustard gas munitions. The 523 tons of chemical weapons are slated for destruction by 2021. Madison County Chemical Stockpile Emergency Preparedness Program Director Michael Bryant said the county's emergency management agency was alerted when the vapor was detected, and area police departments, fire departments and EMS agencies also were notified. Every day the county's emergency management staff is given in a "morning brief" in which they are informed about the day's activities at the depot, Bryant said. "We know exactly what they're doing each day," Bryant said.

Don't be surprised if the sarin or mustard gas stored at this army depot base finds its way into the hands of "terrorists" for yet another false flag attack in the not so distant future. It's interesting that the Obama administration insists on the destruction of any chemical weapons held by the Syrian government within a matter of a few weeks, while the U.S. military needs decades to destroy its cache of chemical weapons.
Posted by Gary R. Welsh at 7:22 AM

I used to think that the cops were behind putting this country under martial law. I now realize they're not smart enough and not coordinated enough to orchestrate such a coo (sic).

The cops are certainly eager and willing participants in imposing total government control, but they aren't the ones calling the shots.

It has gradually become evident that the military is entirely in control of the U.S. government and is doing whatever it takes to put the finishing touches on a full transfer of power from the Congress to the Pentagon. DHS is nothing but the military's wholly owned domestic police and population control force.

If it means blowing up WTC1, 2 and 7 on 9/11 with full media coordination, the military will do it. Stage an overthrow in Libya, Egypt and Syria? They'll do it. Conduct phony wars of empire in Iraq and Afghanistan, they'll do it. Kill millions for more power? Done without hesitation.

Since 911, Americans have been vigorously conditioned to admire and respect military members, even allowing military to walk freely among us in battle fatigues, previously forbidden from public view.

We accept them as overlords, allowing them to board airplanes, first, giving them stewardess-led on-board salutes, and we give them grand public applause at those sad congregations of the slow-minded: sporting events.

I was half-watching a World Series game, but flipped it right off when the game segued into a military-worship number around the seventh inning. This is propaganda that is very effective on a stupid populace.

Such fealty to armed government power does not end well.

ANON - The Police Forces in the USA certainly in some instances resemble the Military.

You are right the Military with complicity of the Mega-Media and the Sports Establishment has created this Warrior Cult. They have become a Praetorian Guard. We seem to have to have say the Pledge Allegiance or sing the Star Spangled Banner and have a Prayer at Public Events.

This spraying of chaff is not surprise after all Agent Orange was sprayed all over Vietnam. Who knows where they tested here in the USA.

It appears that many of things we accused Nazi's and Soviet Union of practicing we now practice. NSA warrant-less Spying, FBI and IRS investigating various groups such as the Tea Party or Occupy Movements that question the Establishment. GITMO, starting Wars based on false information (WMD's in Iraq)or wild claims (yellow cake, Gulf of Tonkin). We have a huge number of people in prison.