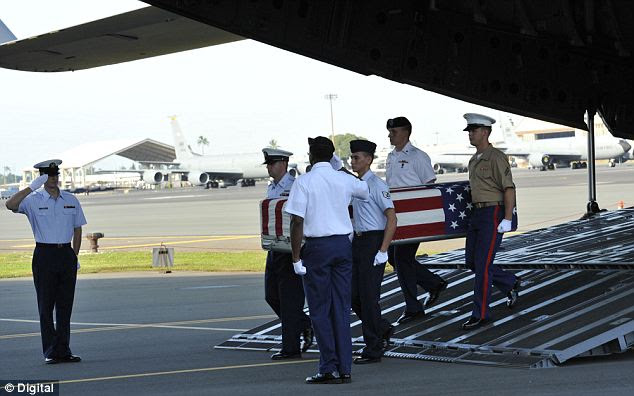 How many times have you seen these images of solemn ceremonies conducted for fallen soldiers long missing being returned to the country after losing their lives in past wars? It turns out that the Pentagon has been faking the ceremonies for seven years using coffins being carried from planes that no longer fly that are supposedly carrying the remains of soldiers returned months earlier.

For seven years, the Department of Defense has faked repatriations where military personnel carry honored dead soldiers off of planes as part of their ceremonial return to the U.S.

While the Pentagon insists the coffins indeed contain the remains of MIA soldiers returned to America from foreign wars, it now admits that the Hawaii arrival ceremonies often attended by a tearful audience aren’t actually arrivals at all.

In fact, the coffins are toted out of planes that can no longer even fly, but must be towed onto the runway for the phony ceremonies and the remains have sometimes been back in the country for months.

The ceremonies are handled by the Joint POW/MIA Accounting Command, an agency charged with recovering some 83,000 missing service men and women from World War II, Korea, and Vietnam.

Until now, agency has allowed the public to believe that flag-draped boxes pulled from C-17 military planes contained the rediscovered dead from those countries.

But the Pentagon acknowledge to NBC News Wednesday that, in fact, the remains had only just been removed from the lab at Joint Base Pearl Harbor-Hickam in Honolulu.


Hey, they faked the capture and killing of bin Laden. Why wouldn't they fake the repatriation of fallen soldiers?
Posted by Gary R. Welsh at 7:38 AM