Law Enforcement Lied About Bombing Suspects Capture: No Gun On Him, No Suicide Attempt 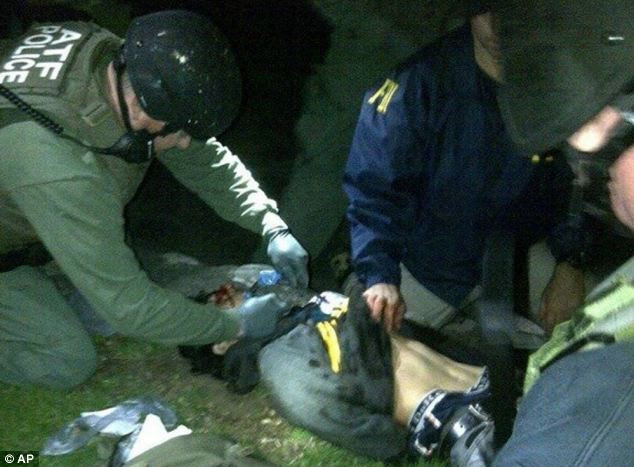 It's an ever-changing narrative when it comes to what law enforcement officials are telling us about the circumstances surrounding the police shootout in Watertown that left Tameran Tsarnaev dead and led to a nearly 24-hour massive manhunt during which the entire city of Boston was placed under martial law as police in military combat vehicles and gear forced residents from their homes at gunpoint to conduct warrantless searches for the dead suspect's brother, Dzhokhar Tsarnaev, shown above following his capture.

Boston Police Commissioner Ed Davies claimed after Dzhokhar's capture that he had engaged police in gunfire exchanges for nearly an hour before police unleashed a barrage of flashbangs to prod him out of the boat where he had been found hiding until he was found by the boat's owner shortly after officials lifted their martial law order allowing residents to leave their homes. News reports originally cited police as saying Dzhokhar was armed with a M-4 carbine rifle, and that he had attempted to commit suicide by shooting himself in the neck prior to his capture. Officials are now telling the AP that Dzhokhar was unarmed! Those same law enforcement sources tell the AP that just one 9mm handgun claimed to have been used by his brother at the shootout in Watertown the night before was the only gun recovered from that crime scene, which supposedly caused injury to a transit officer.

Two unnamed U.S. officials have told the Associated Press that the surviving suspect in the Boston bombings was unarmed when police captured him hiding inside a boat in a neighborhood back yard.

The report contradicts the Boston police department's own account of Dzhokar Tsarnaev's capture on Friday - after commissioner Ed Davies described a firefight between him and officers before the terror suspect was captured.

The New York Times also said an M4 rifle had been found on the boat - another claim contradicted by the latest revelations.

Officers had originally said they had exchanged gunfire with Tsarnaev for more than one hour Friday evening before they were able to subdue him.

But on Wednesday, the law enforcement officials told the AP that no gun was found aboard the vessel . . .

It also contradicts many media accounts of Tsarnaev's final moments of freedom.

The New York Times reported that an M-4 carbine rifle-similar to the weapon used by American troops fighting in Afghanistan-was found aboard the boat and that officials had recovered two handguns and a bb gun used by the two robbers.

The throat wound sustained by Tsaernev was also said by numerous law enforcement sources to be self inflicted.

Sources told Newsday that Tsarnaev's bullet wound looked to be self-inflicted, due to the location of Tsarnaev's wound and the trajectory of the bullet.

And Reuters reported that the suspect was shot through the mouth by a round that exited through his neck.

Dozens of bullet holes were seen on the exterior of the boat in photos taken shortly after the final standoff in the Watertown backyard.

The officials told the AP that say investigators only recovered a 9 mm handgun believed to have been used by Tsarnaev's brother, Tamerlan, from the site of a gun battle Thursday night, which injured a Massachusetts Bay Transportation Authority officer.


What else are they lying about? I've reached the point where I don't believe a damn thing federal law enforcement officials are telling us about the bombings and the two persons the FBI has fingered. Perhaps their friends initial impressions of them before learning they were told the two were responsible for the horrible terrorist acts are closer to the picture than the one federal authorities are now painting of the two men. It has all the hallmarks of another false flag. Wake up, America.
Posted by Gary R. Welsh at 10:36 PM

Thanks for this info, Gary. Jeez! And NoDisinfo.com in the drkresearch posted there on 4/22 and later dates. presents evidence that Andrew Kitzenberg is an espionage agent being used to frame Muslims for the Boston Bombings.

And as far as asking people to wake up, Gary, the mass media being is used for mind control, and besides most people do not have your intelligence and courage. Dan Bidondi, of infowars, who represented we the people at press conferences, doing a magnificent job, is now under hateful attacks from 'family', causing him great stress.