What About The Size Of The Bus? 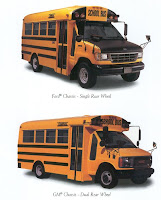 An observant reader points out that the size of the bus the Carmel basketball team used when a freshman member of the team was allegedly sexually assaulted by several members of the senior team was not the traditional size of school buses. The reader informs me the smaller bus the freshman team used when traveling to and from Terre Haute is similar in size to the buses shown at the left. We're told three coaches were on the bus at the time the sexual assault is alleged to have occurred but were not aware of what was taking place. Nobody has explained why the seniors were riding on the freshman bus that night. We're also told by Hamilton Co. Prosecutor Sonia Leerkamp that the video tape recorded that night by the on-board video camera was too dark and grainy to show what had transpired and had been sealed with other grand jury documents. It just doesn't add up. What happened to the second victim on the bus? His parents feared retribution because of the mother's employment relationship with the school and decided not to press a criminal case according to a Fox 59 News' update tonight. Things are really stinking in the criminal justice system up there in Hamilton County. And people were worried about David Wyser making it into the prosecutor's office. Supposedly Laskowski had his sights set on playing basketball for IU and Hoge and Kitzinger planned to play at Depauw. Hopefully, those plans are nixed for good by the respective colleges. Maybe Leerkamp will get that judgeship she's always wanted, or maybe not.

UPDATE: Sen. Mike Delph becomes the first elected official in Hamilton Co. to speak out about the charges brought in this case. On his Facebook site last night, Delph wrote, "As a lifetime Carmel resident and a graduate of Carmel High School, I am very troubled by the misdemeanor charges filed against the accused." "This should not be swept under a rug." Delph continued, "Felony charges should be filed and a jury should render judgment after both sides present their evidence." "No one is above the law!," he said.

UPDATE II: Leerkamp denies the team used the smaller bus on the trip. Others say the smaller bus is used by the team. If she would have simply disclosed the video tape she doesn't want the public to see, it could help clear up the matter. Let the public decide whether it is "too dark and grainy." The smaller buses hold up to 30 children and 20 adults. Leerkamp's reaction to the victim's parents was that she wanted them to come and talk to her if they had new information in the case. Hasn't she already talked to the victim and his parents after all this time?

UPDATE III: Newly-released documents from the school indicate that 51 students were on the bus on the night of the alleged attack, which means it had to be the larger-sized bus. I've also heard from one Carmelite about a possible reason the four seniors were riding on the freshman bus. According to this person's account, the four players had been acting up and the team's head coach became upset with them. When the buses stopped at a rest area on the return drive from Terre Haute, the coach is said to have told the four that if they wanted a ride home, they would have to ride on the freshman bus.
Posted by Gary R. Welsh at 8:08 PM

I've been on buses that size hauling kids for school events. Not much drastic going on that isn't going to be heard as a parent, unless you're overwhelmed with noise, in which case you're definitely not ignoring your surroundings because you're darn sure not sleeping through it. I'd be talking to my lawyer if I'm the parent of a victimized child.

The victim is pursuing a civil lawsuit, yes?

Yes, That's what Turner is doing involved in the matter, although I didn't think he had civil litigation experience in this area.

I wonder what the precedence is for the grand jury of Carmel exerting jurisdiction over a criminal matter that occurred in another county???

I wonder how this would have played out 'if' these same exact incidents had occured by these 'adult' (over 18) students and the victim was a 14 year old female student?
How many graduates of Law Schools are in that prosecutors office? After reading all the reports, probable cause, statements, etc, they couldn't put their collective minds together and file charges.
Grand jury is 6 and 1 alternate citizens (I believe). They rely on the advice of the prosecutor or dep/pros.
I also saw where all the appropiate Statues where given to the GJ to consider. IMHO.. (sort of like driving the car..whoever is behind the wheel has to decide which road to travel).

If someone has any doubt the coaches were part of the conspiracy to commit Criminal Deviate Conduct, then consider that Indiana prohibits aiding and abetting a felony!

Let's review Indiana Law that relates to the coaches:

IC 35-41-2-4
Aiding, inducing, or causing an offense:
A person who knowingly or intentionally AIDS (coach failing to act/end the criminal deviate conduct), INDUCES (coach allowing criminal deviate conduct to take place in his presence on the school bus while 'looking the other way' giving impunity to the aggressors), or causes another person to commit an offense commits that offense, even if the other person:
(1) has not been prosecuted for the offense;
(2) has not been convicted of the offense; or
(3) has been acquitted of the offense.


Indiana Law 35-32-2-4: (a) If a person in a county engages in conduct sufficient to constitute aiding, inducing, or causing an offense committed in another county, he may be tried for the offense in either county.
(b) In a prosecution for conspiracy to commit a felony, any or all offenders may be tried in the county in which:
(1) the agreement was made; or
(2) any overt act in furtherance of the agreement is performed.
(c) In a prosecution for an attempt to commit a crime, the offender may be tried in any county in which:
(1) a substantial step towards the commission of the underlying crime occurred; or
(2) the underlying crime was to have been completed.

...Another point to consider is ASSISTING A CRIMINAL:

IC 35-44-3-2
Assisting a criminal; defenses
Sec. 2. (a) A person not standing in the relation of parent, child, or spouse to another person who has committed a crime or is a fugitive from justice who, with intent to hinder the apprehension or punishment of the other person, harbors, conceals, or otherwise assists the person commits assisting a criminal, a Class A misdemeanor. However, the offense is:
(1) a Class D felony if the person assisted has committed a Class B, Class C, or Class D felony; and
(2) a Class C felony if the person assisted has committed murder or a Class A felony, or if the assistance was providing a deadly weapon.