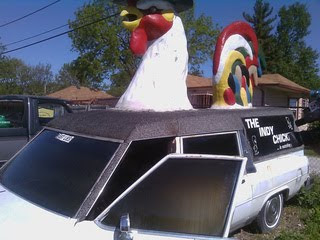 An Indianapolis Metropolitan Police Department officer arrested yesterday for setting fire to an apartment complex is now suspected of setting nine fires in his police district. Officer Jesse Russell, Jr., who resigned from the police force after his arrest, is suspected of setting fire to the Indy Chicken Limo. Observant readers will recall that the car's owner and his Indy Chicken costume became a fixture during the successful Bart Lies campaign to unseat former Mayor Bart Peterson during the 2007 mayoral election. This blogger wonders when the limo owner doesn't come to the realization that Greg lies too.
Posted by Gary R. Welsh at 2:08 PM

The article says there are other Indy Chicken limos around town.

Seriously? I thought there was only one, the one Bart Lies mentioned in this entry: http://bartlies.com/2010/05/06/fried-chicken/

Gary we all have our opinions. I respect yours, please respect mine.
The real question is ...why was this guy hired anyway? This officer was hired under the Peterson Administration and while Anderson was in charge of IMPD. If you recall Bart allowed IMPD to lower their standards...and this is what we get.
This guy would have been weeded out during his psyche exam if Sheriff Anderson didn't allow anyone to carry a badge and gun. After Indianapolis spent thousands to train this guy I'm out several thousand dollars and Indy still needs a qualified LEO.

You could ask that same question of any number of police officers hired by IMPD, Ernie. At some point you've got to stop blaming Bart and Frank for everything. Ballard has been in charge for almost three years, almost all of which he has had direct control of IMPD. He has made his own bad hires, and his administration engaged in a cover-up of the OmniSource scandal. This is the reward we get for paying them a 9% pay raise over the past two years, money our City didn't have to pay them and during a period that other people have seen their wages frozen or reduced. There is absolutely no evidence that Ballard has done any better than Peterson when it comes to the police. Ballard can float phony crime statistic numbers all he wants, but to the public, it is quite apparent that crime is up in the city. If the numbers are so impressive, why won't the City report its crime statistics to the FBI?

When did IMPD stop reporting stats to the FBI?
There was a unit (Crime Statistics) that was responsible for reporting the stats every month.

There is a guy who started operating his own chicken limo service in the past year or so. He even managed to get a bit of face time on the news when THE chicken limo was torched.

I don't know the history of Ernie's but I recall seeing one of these driving around town from time to time, for many, many years. Maybe there have been several incarnations of the idea.

The one the Indy Chicken drove had the anti-Peterson stuff on it. I recall seeing at least one other car with a chicken on its roof that advertised something else.

Thank God the police officer arsonist got caught! I know there are terrible stories of firemen, who were also arsonists. Scary people, with so much access to targets.