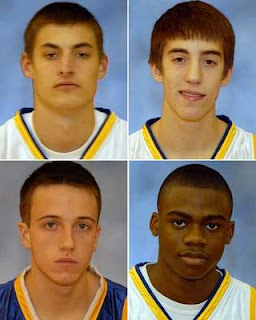 The Carmel basketball players accused of sexually assaulting  freshmen basketball players at the back of a school bus driving the team back from a game in Terre Haute while coaches sat in the front of the bus will only be charged with misdemeanors. The same will hold true for two other Carmel basketball players accused of sexually assaulting a 17-year-old student in a lockroom before the incident on the bus. The four players have been charged with criminal recklessness and battery in the incidents described as hazing. The four players have been identified as Scott Laskowski, (top left) Robert Kitzinger, Brandon Hoge and Oscar Falodun. Laskowski's father, John, formerly played on the IU Hoosiers basketball team and later played for the Chicago Bulls. Kitzinger's and Hoge's charges relate primarily to the bus incident, while Falodun's and Laskowski's charges relate to the lockerroom incident. The formers' case will be transferred to Hendricks County, while the latters' case will be tried in Hamilton County.The prosecutors of Hamilton and Hendricks county which investigated and brought today's charges are both women. Do you think these two prosecutors would have taken this long to investigate the case and have been as lenient in charging the accused had the victims been women? These charges don't seem to match the claims one of the victim's attorneys, Robert Turner, has been making about what transpired in these incidents. Turner said today that he could have investigated and brought charges within a day in this case instead of the months it has taken.The criminal deviate conduct  and criminal confinement charges discussed earlier by prosecutors didn't make it to the charging sheet of a grand jury that issued the sealed indictments last week. A copy of the grand jury's indictment can be accessed here. It's pretty useless because it recites  no specific details about what the accused allegedly did to the victims other than to say such things as he touched him in a rude and insolent manner, or he grabbed or held him. The prosecutors clearly didn't want to give specific details that might reveal just how insufficent today's charges were in this matter. The accused will probably cop a plea deal, pay a fine and serve no time or only serve home detention for a short period of time. It's possible they might even qualify for diversion, in which case their criminal records will be expunged after one year if they remain out of trouble. This entire matter should show Hoosiers once again that we have one of the most corrupt criminal justice systems in the nation. Innocents are sent to prison for crimes they didn't commit; the privileged break any law they wish and face little or no consequences.

UPDATE: Did anyone notice that the original online copy of the indictment has been removed and replaced with one that no longer has the name of the persons to whom the indictment got distributed? Also, reporters waited to cover the charged as they turned themselves into police. The four were escorted in a van into the building to avoid any media photos or video taping of them. Special treatment for special defendants.
Posted by Gary R. Welsh at 12:36 PM

The charges are a joke. Criminal confinement is a felony in and of itself. Did the victims just sit back and take the actions?

This is a travesty! I wonder if Leerkamp forgot to mention to the Grand Jury that criminal deviate conduct is a FELONY?

This was NOT horseplay, like towel flipping, it is VIOLENT CRIMINAL behavior.

I guess they won't have to be on a sex offender registry list if they are convicted.

The taxpayers also pay for two police officers to accompany Ballard on all of his overseas junkets and provide security, as if anyone outside Indianapolis even knows who the hell he is.

I was getting my hair done some weeks ago and the mother of one of these boys was in the salon at the same time. She was stating quite openly and with conviction that not much was going to come of it. According to her, she and her family were no longer really worried about it.

Being a lawyer, I thought she had her head up her ass. I was wrong. I can't help but wonder how she was so certain so many weeks ago.

This whole thing is disturbing on so many levels.
My sister is a resident of Carmel and has said this has been going on for years and is pretty much accepted. Of course this is just hearsay but much of this rings true. Living in Indy I was not aware of this "problem" in the Carmel schools but my 20-something boys were, who were both active athletes while in high school.
Forcing objects into someone's nether regions goes far beyond a misdemeanor to me.
Same sister was waiting for her girls soccer bus and was just observing behavior etc.As the bus arrived she noted ALL 4 of the teacher/coaches were in the front seats It was disturbing to her in light of the things that had occurred on the basketball bus a week before.
I have also heard that an ER nurse was the one who notified CPS about the assault on one of the victims. Thank goodness that she took appropriate action despite the circumstances. Three cheers for the nurse!
I totally understand any reluctance a child may have to come forward. This is where parents should be talking to their athletes at length about this, be more plugged in to what is going on in your child's life.
John Laskowski is a nice guy or at least used to be...what the hell happened here, John?
There is bullying in schools, sports teams and even places of employment. Search Amazon.com for bullying and there is a treasure trove of published literature on this subject. My hope is that the victims will get the psychological help that they need as well as the perpetrators. My hope is that Scott, Robert, Brandon and Oscar's parents hold these kids accountable and that they will receive the psychological help that they need, also. This is NOT NORMAL behavior.

Everybody in the media seems to have forgotten that several years back a member of the high school swimming team got his pants pulled down and an object shoved up his ass in one of these so-called hazing rituals. That story got swept completely under the rug.

I also found Leerkamp's performance at the televised press conference, about the grand jury results, unsettling, pertaining to her composure, attitude, and many startling statements. I have very good feelings about how Lee Buckingham will perform, once (not if) he is elected Hamilton County Prosecutor, and pray I am not wrong.

If I were in a hair salon with that mother, I'd probably be in jail right now, cause I'd have pulled her hair out.

The Attorney General should look into this; some civil rights have definitely been violated, and some heavy duty cover-up by utilizing the grand jury, has been instigated due to the players social status. It comes as no surprise that rich white trash is worse than poor--our political system and justice system are proof of that...