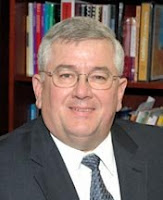 Washington Township Superintendent James Mervilde, who already has a salary and compensation benefit package worth more than a quarter million dollars annually, will see an increase in his annual salary of 7% and a $124,800 boost in his pension benefit, if the township's school board approves a proposed renegotiation of his salary and benefits at its meeting tomorrow night. This comes at a time the school district is expecting little or no additional state funding from the proposed state budget. Moreover, at least half of the school district's middle and elementary schools are failing at least one category of the state ISTEP test.

Dr. Mervilde is currently paid an annual salary of $171,600 under a contract that is set to expire on June 30, 2010. Mervilde exercised his right to renegotiate his current 3-year contract prior to its expiration. He is seeking an increase of 7% in his annual salary through June 30, 2011, taking it to $183,500. The biggest change, however, is in a proposed revision that will require taxpayers to purchase four years of credit time for Mervilde in the state teachers retirement system at a cost of $31,000 per year, or $124,000.

I'm told that this has become a common negotiating strategy for superintendents like Mervilde who are nearing retirement age to ask a school district to purchase credit time for purposes of calculating their retirement benefit. In lieu of a larger salary increase, the additional credit time the school district purchases on the school district official's behalf ensures a much higher retirement benefit for the employee. The school official is not taxed on the credit time purchase, enhancing its value to him or her greatly. These benefits are often not explained to the public to allow them to properly evaluate how much school officials are being paid.

School board member Greg Wright believes the nearly $200,000 salary and benefits increase for Mervilde is too costly. “These are tough economic times for many in our community," Wright said. " Increasing any municipal employee’s employment contract by hundreds of thousands of dollars is simply outrageous.”

UPDATE: If you think this deal is bad, take a look at the deal the Greater Clark County schools gave to Stephen Daeschner, the superintendent who replaced Tony Bennett, Indiana's State Superintendent of Education. Although the school board had a budget of $150,000 for the position, the school board thought the 67-year-old Daeschner was worth $225,000 a year, plus an additional $1,500 a month to sell his home to relocate, family health insurance benefits and more according to the Jeffersonville News and Tribune. The school board's attorney advised the school system it could simply seek private donations to find the money the school hadn't budgeted for the position.
"Larry Wilder, attorney for the school board, said that though details are still being worked out, people should be able to donate to the school corporation directly and anonymously if they want, or to a given foundation that would forward that money on to Greater Clark with their name available publicly, which would allow the donor to use it as a tax write off," the News and Tribune reported. Yes, that's the same Larry Wilder, counsel to the Jeffersonville council, who was found in his neighbor's garbage can last week after a night on the town. Can you imagine the potential conflicts if wealthy parents made specific donations to cover his salary? I suppose that never occurred to Wilder
Posted by Gary R. Welsh at 6:03 PM

You know, wearing green and taking to the streets is sounding better and better. I don't mean as some FOX News shill in a so-called teabagger party either.

I mean green as in living in Sherwood Forest and terrorizing the fat, rich parasites...

Follow these links to get more background on this man and his agenda:

This is unbelievable, especially at a time of economic crisis in our state and the plight of many taxpayers to keep up their homes, pay their utilities, and feed their families.

Gary, I don't know if you know it or not, but there is a Indiana Supreme Court program where you can turn in attorneys who have drinking problems. I can't remember the name of it. I would think Wilder would qualify though.

Wilder actually advised people that they could give money to a tax exempt foundation with instructions to pass it along to an entity for which the deducation would not be exempt? A first year law student would know that's tax fraud. Actually the foundation would undoubtedly get hit too.

IMMEDIATE ACTION NEEDED! BOARD MEETING TOMORROW!
Please notify everyone you know via your email and social media networks and ask school board members Tony Dzwonar and Wanda Spann Roddy and tell them you expect for them to vote against Mervilde's proposed pay increase.

Fiscal conservative school board member, Gregory Wright, has pledged to vote against Mervilde's pay raise at tomorrow's board meeting.

Superintendents are public employees and as such their salaries and benefits are open to public disclosure. Anyone can request a copy of those contract(s). The Star published Marion County superintendent's data on their web site in recent history.