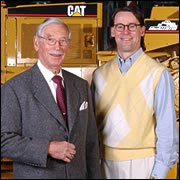 Howard Co. Republican Chairman Craig Dunn referred to Indianapolis businessman P.E. MacAllister as a "kingmaker" conducting his own "star chamber" primary reports WISH-TV's Jim Shella. Dunn's comments came after MacAllister penned a letter to Republican leaders in the Fifth congressional district that confirms the thought process of the elites who run the show here in Indianapolis that I've lamented about so much on this blog. It seems MacAllister has an elimination plan in the Republican congressional contest against U.S. Rep. Dan Burton that doesn't involve voter participation. Here's a taste of MacAllister's letter, which fellow blogger Scott Fluhr shared over at Hoosier Access:

Some of us in Marion County are watching with interest the contest in our Fifth District, where four men are challenging the continuing tenure of Dan Burton. The issue of whether or not this is a great idea is by now irrelevant since the candidates are already in the fray, each hoping to win the primary. The nature of the field may be interesting, but impact of such a donnybrook has every prospect of doing considerable damage, despite the fact “this is a free country” and anyone who wants to run for anything is allowed to do so. If there is ample reason to challenge the incumbent, perhaps exploring some way of lessening harm done is in order.

I have discussed the race with both the Marion County and the State Republican Chairmen, hoping to minimize the adverse impact, but for reasons of his own, neither thinks it wise for him to exert the authority the party has given him, leaving us with a spectator role in this critical exercise.

I appreciate their position but don’t see it helpful. My memory of the last free for all, harkens back to a sheriff’s race in Marion County an election or so ago, which got very bitter, very expensive, and was productive of zilch for either candidate.

There could be an alternative. Maybe pretty wild, but here’s one idea. Let all four challengers do their best to line up support, but by the end of the year, say by Christmas time, allow a panel of 25 party elders, respected figures, influential people, major donors, judicious folks from the district, determine which of the four is the best candidate. Let’s assume we can get the contenders to agree on this tack, which means the three losers gracefully depart the scene and support the selectee in the spring primary.

Tom John reminded me that the sun does not rise and set on Marion County but beams on other counties in the district, and including them in this experiment is essential.

Thus this letter to you, asking for: your reaction; requesting your cooperation as one of the “judges” and helping us in finding other worthies in your jurisdiction. The panel, in other words, is a work in process.

This program has to be impartial; has to include promise of total anonymity so no one knows how we vote. It has to include established candidate criteria…past experience, intellectual capacity, persona (charisma), ability to articulate, fundraising capacity, stance on given issues; nature of community support (who is in his list of donors and advisors), etc.

I cannot assure all will buy in. Two of the contenders have signed on, agreeing to the principle, pending details of how it is handled.

We need to contact the other two, but my point will be that this is one way of determining who represents the district come the primary. The inference is if a losing candidate opts to run against us after his peers have declined support and puts his personal ambition above that of party unity, he needs not call on me next spring for money.

MacAllister, incidentally, is backing Ice Miller attorney and lobbyist Luke Messer in the 5th congressional race.
Posted by Gary R. Welsh at 6:58 AM

So, the curtain parts and the Indiana Republican party is revealed as a couple of dozen self-appointed rich folk acting as a benevolent oligarchy.

Why struggle against the inevitable? You will be assimilated.

That was nauseating to read. He obviously sees no point in giving The People a voice in who they choose to represent them.

I have just lost all respect for P.E.

How could anyone could have had respect for P E ?

MacAllister is one of several people to receive stock in the county cable company in return for granting the franchise, nad make returns of 100:1.

This is documented in Rex Early's book. Rex avoids using the word "bribe".