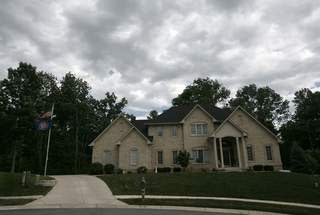 Kristina Nelson is a 43-year-old former civilian employee for the Indianapolis Metropolitan Police Department who is married to Marion Superior Court Judge William Nelson. She faces a charge of forgery, alleging she forged another judge's name, Marion Superior Court Judge Shiela Carlisle, on an order stopping a mortgage company from foreclosing on the Nelsons' home on Geist Reservoir. Kristina Nelson is also a sister-in-law to Judge Carlisle. The charge by police and the Marion Co. Prosecutor's office alleges Kristina falsely claimed her husband had been shot and that she had her jaw wired shut as a result of an attack on the couple. Kristina Nelson says her husband had no knowledge of her forging the document. The Star's Heather Gillers reports on this strange story:

A former IMPD employee who is the wife of a Marion Superior Court judge was arrested Friday on preliminary charges she forged another judge's name to stop foreclosure of their home, according to the Indianapolis Metropolitan Police Department.

Kristina Nelson, 43, who worked as a civilian public assistance officer for IMPD, told police she had signed Judge Sheila Carlisle's name on a counterfeit document claiming she and her husband had been attacked and ordering Everhome Mortgage to stop the foreclosure until the couple could recover, according to the police report, which was filed Friday.

She told police that her husband, Marion Superior Court Judge William Nelson, knew nothing about the incident. Kristina Nelson is Carlisle’s sister-in-law, the police report said. Carlisle is married to her brother.

Kristina Nelson was released Friday on a $5,000 bond and faces preliminary charges of forgery, according to IMPD and Marion County Prosecutor Carl Brizzi's office. Brizzi's office is seeking the appointment of a special prosecutor to decide on the final charges.

"Given the fact that our deputy prosecutors appear before (William Nelson) Monday through Friday," said Chief of Staff Helen Marchal, "we thought that this would be the best route to go."

Kristina Nelson faxed the document to Everhome Mortgage on June 17, according to police. The document said that the Nelson’s had been the victims of an assault and that William Nelson had been shot and Kristina Nelson had suffered injuries that required her jaw to be wired shut — none of which was true, police said.

Carlisle told police investigators the signature was not hers but that she recognized the address as belonging to her sister-in-law, Kristina Nelson, the police report said.

How very sad. Especially in light of the fact that judges make a LOT of money.

This is a shame for Judge Nelson. He is a good man. Hopefully this doesn't damage his career.