Merrick Garland Has Past History As Partisan Hack Attorney For Democrats 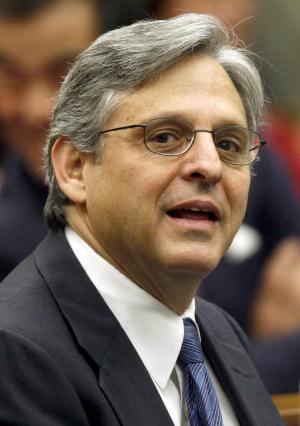 The media could not be more glowing of their review of President Barack Obama's choice to replace the late Justice Antonin Scalia on the U.S. Supreme Court. Merrick Garland is the most eminently-qualified candidate ever nominated to the Supreme Court liberal news commentators repeated over and over again yesterday. He's a moderate, even conservative on some issues they claimed. Republicans have really boxed themselves into a corner they declared. President Obama had called their bluff and appointed the most acceptable candidate Republicans could possibly expect from President Obama.

Now let's hear the rest of the story. I told you straight up yesterday following President Obama's announcement of his appointment that Garland was a partisan Democratic attorney, and it's a fact. One need only review the questionnaire Garland completed when he was nominated by President Bill Clinton for the D.C. Circuit Court of Appeals to learn of his past participation in Democratic campaigns, something the much-criticized Justice Scalia had never done before he joined the D.C. Court of Appeals and later won confirmation as a member of the U.S. Supreme Court following the rejection by the Senate of President Reagan's first choice, Robert Bork, also a Court of Appeals jurist.

"I provided volunteer assistance on a Presidential Debate for President Clinton in October 1992 and for Michael Dukakis in October 1988," Garland wrote in response to a question on his previous political involvement. "I did some volunteer work for Walter Mondale’s presidential campaign in 1983-84. As a college student, I worked two summers for the campaign of my then-congressman, Abner Mikva, in 1972 and 1974." Perhaps you can attribute Garland's campaign work for Abner Mikva, one of the most liberal members of Congress ever elected from the state of Illinois to a youthful indiscretion but most likely not. Birds of a feather generally flock together.

Despite being a partisan hack politician, Mikva got appointed to the federal bench and once boasted that he tried to hire Clinton as a law clerk. Mikva, of course, later served as a White House counsel for President Clinton, playing clean-up after Vince Foster supposedly blew his brains out in Fort Marcy Park. That bombing in Oklahoma City that Garland headed up occurred during Mikva's service as Clinton's White House counsel, a terrorist event Clinton gladly exploited as being caused by right-wing extremists egged on by the likes of Rush Limbaugh. Mikva may not have snagged Clinton as a law clerk, but he did snag another Obama appointee, Elena Kagan, as one of his law clerks. Mikva left the Clinton White House about the time Clinton began using Monica Lewinsky as a humidor for his cigars.

Garland's work for the presidential campaigns of Clinton, Dukakis and Mondale all occurred long after he graduated from Harvard Law School and began his professional career as an attorney. These high-paid attorneys at Washington, D.C. never really volunteer their services; there's always a quid pro quo in there somewhere for their law firm and their law firm's high-rolling clients. That work he did on the Mondale campaign specifically involved all of the financial discrepancies that arose with Mondale's running mate, Geraldine Ferraro, and her mob-connected husband. People who've been around for awhile remember how much the Wall Street Journal took Ferraro to task for her and her husband's tangled financial affairs that included New York businesses where the mob produced pornographic movies.

Garland was rewarded early on with a job in the Carter Justice Department. When Bill Clinton became president, he was hired as a federal prosecutor in the D.C. district court before Deputy Attorney General Jamie Gorelick a partisan Democratic hack, hired him away to work at the Justice Department reporting to her. He was dispatched to Oklahoma City immediately following the bombing of the federal building in Oklahoma City to lead up the prosecution of the bombers. As the lead prosecutor, we hold Garland personally responsible for the cover up by the federal government of other co-conspirators in the bombing. The misplacement of all of those surveillance video images by Garland's investigation team that captured Timothy McVeigh's co-conspirators was more than any concerned American can accept as an honest mistake. Thanks to Garland and his corrupt cohorts at the Justice Department, the American people never learned who was really behind the Oklahoma City bombing.

UPDATE: Oklahoma City, like Indianapolis, is plagued by a daily newspaper run out of Langley, Virginia. The local Gannett newspaper there is chastising the state's two Republican senators for failing to signal their support for Garland despite his strong connection to the city. Perhaps ordinary Oklahomans are all too familiar with how Garland's team of prosecutors covered up the role of others in the bombing by disappearing the surveillance videos other local, credible Oklahoma City reporters reported on at length at the time based on credible law enforcement officials who had seen what was on the videos and knew they proved others besides McVeigh were involved in detonating bombs that brought down about half of the federal building.

And the Gannett-owned Arizona Republic is now going after Sen. John McCain for not supporting confirmation of Garland. The newspaper has served him with notice his position will become the central issue of his re-election campaign this year.
Posted by Gary R. Welsh at 2:14 PM

Yeah, what about that other guy in OKC! We'll never know.

Garland is another gun-grabbing statist.

12 of the last 16 Supreme Court judges were appointed by Republicans, and at the same time, the Judiciary morphed into the last backstop of any social program ever (Roe, Heller, etc).

This managed to give us a 4-judge bloc that voted in near-perfect lockstep, a 4-judge conservative bloc that semi-routinely defected to the liberal side, and Kennedy. Then Scalia kicked it.

They could literally bring up the guy who wrote the Dredd Scott decision and there'd still be no guarantees he'd be a conservative judge once he actually got on the bench based on the last 60 years of judicial history.

It took me a long time to discover the truth behind OKC and WTCs. Now that I understand how the operations go, no newscast can be trusted, and no judge, attorney general, law enforcement, fbi, cia , atf who supports the official account has any credibility to me any more.

If this judge is a player in OKC and helped cover up the truth, it tells me what kind of plans are in store going forward, and it is not a good feeling.

What about the barometric pressure bomb that was found on the OKC bombing site,it just disappeared. there a directional implosion type bomb, notice only the Murrah building was damaged. Just saying!

8:43, do you have a source for this? And please, a credible source.

So many of these anti-gov't conspiracy theorists are so far out there with their beliefs, it leads one to question of they're visiting faculty from the planet Neptune.

If they really hold so much contempt for the US govt, then why don't they just get the hell out of here??

I don't know about a barometric pressure bomb that anon. 8:43 speaks about, but Gov. Frank Keating, a former FBI agent, stated on the day of the bombing that unexploded bombs were found within the part of the building that still stood that were being dismantled by bomb removal experts. Questions have also been raised about how there could have been total structural failure of the building from a truck bomb explosion on the street nearly 20 yards away. Some insist there was at least one, if not more explosions that occurred within the building. The story about the bombs found inside the building disappeared the same way John Doe #2 and others involving in the terrorist plot disappeared as the investigation unfolded. People also found it very odd that Gov. Keating's brother had published a novel just a couple of years before the OKC bombing based on a strikingly similar terrorist bombing in the heartland. A jailed whistle blower has insisted an entirely different type of explosive devise patented by the Israelis was used to cause catastrophic damage to the building. A homemade fertilizer bomb McVeigh supposedly used could never have caused that much damage in a directed fashion towards the building from the street.

https://www.youtube.com/watch?v=-NQQfGgLPQg (Talks about other devices)

The important point of that video, anon. 9:39, was the confirmation of two unexploded bombs more powerful than the original explosion being removed from the building. How those bombs got inside the building and who made those bombs never got answered by federal investigators. Yet anyone who questions the government narrative today is dismissed as a crazy conspiracy theorist.


Moreover many eyewitnesses reported not one, but two explosions, and this is a certifiable fact. Investigations at the Oklahoma Geological Survey at the University of Oklahoma revealed seismographic records indicating two explosions, ten seconds apart. The first occurred at 9: 02 and 13 seconds with another following at 9:02 and 23 seconds. According to General Partin and many explosive experts that investigator Ted Gunderson has spoken to, this rules out the explanation of a truck bomb.

A more plausible explanation, they say, is a barometric bomb. This works via a process that involves not one but two explosions; the first uses an explosive known as PETN which releases a lethal cloud of chemicals, ammonium nitrate and aluminium silicate. This cloud is energized with what is described as a “high potential electrostatic field.” A few seconds later there follows another blast using an explosive called PDTN that ignites the cloud created with a much greater force than TNT.

This would account for the two blasts heard by witnesses and it would also explain the extensive damage caused by the explosion. However such a bomb would be beyond the scope of a supposed ‘lone nut’ like Timothy McVeigh. In fact knowledge of how to construct such a device is available to only a few with the highest level of security clearance because the barometric bomb is still highly classified. In other words only those with a high level of security clearance in the U.S. Government and security services would have access to the know how to construct such a device.