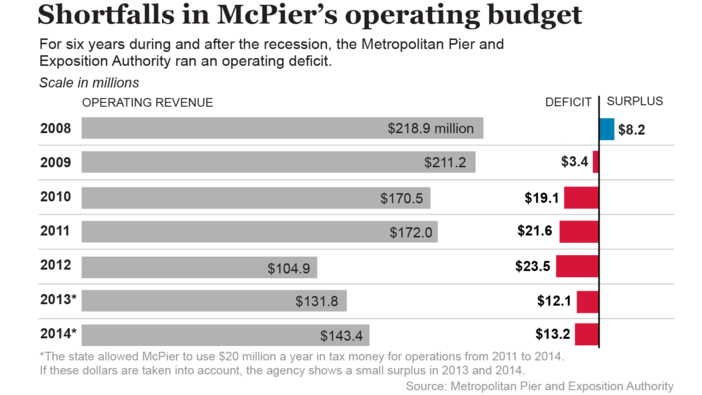 The Chicago Tribune has a very good story that members of our Indianapolis Capital Improvement Board should be looking at closely as they secretly prepare yet another major expansion of the Indiana Convention Center they're being told by the Visit Indy folks they have to do to remain competitive with other cities vying for convention business. Chicago's Metropolitan Pier and Exposition Authority ("McPier") has been running operating deficits since 2009, requiring annual state subsidies from a state government itself mired in massive debt and budget woes, just to stay afloat.

McPier is now trying to outgrow its problem by going $650 million further in debt to build a new sports arena and hotel adjacent to the McCormick Place Convention Center to grow its convention business, which has been declining for several years due to increased competition from popular convention destinations like Las Vegas and Orlando. Convention attendance in Chicago has been declining for the past 15 years. Not surprisingly, The Tribune found that McPier is relying on a badly-flawed study to project revenues and expenses from the addition of the new sports arena and convention hotel.

The 10,000-seat arena will be leased by DePaul University. The study assumes sell-out games every season. That's triple the average attendance DePaul has seen at its basketball games in recent years, which are currently played at Rosemont. The Tribune points to studies showing that sports facilities are of little value to convention planners because of their fixed seating. McPier will have to rely more heavily on the new Marriott Marquis Hotel to offset the over-estimated revenues from the sports arena. Other recent hotel expansions in Chicago have increased competition for rooms, making those expectations questionable at best.


In interviews, more than a dozen experts raised doubts about whether the project would have the economic impact McPier officials predict, questioning in particular the wisdom of building the arena. Stadiums are not successful catalysts for economic growth, they said, and nothing about the planned McPier arena suggests otherwise.

For years, the McCormick Place campus overlooking Lake Michigan was an unmatched draw for conventions. But it lost significant ground to Las Vegas and Orlando over the last two decades. Attendance at meetings and trade shows fell to 992,000 last year from 1.5 million in 2003 . . .

Budget problems developed, too. After years of covering costs with the help of profits from the Hyatt Regency McCormick Place and its convention business — as well as state tax revenues on Chicago-area hotel stays, rental cars and other services — the agency ran an operating deficit for six years during and after the recession.

Hoping to stabilize McPier's finances, the legislature in 2010 gave the agency permission to issue up to $450 million in construction bonds backed by state taxes. Some of that money went to expand the Hyatt, whose profits help make up for money-losing McCormick Place, but the agency also had long contemplated building a second hotel that could emulate the Hyatt's success.

By 2012, McPier's ambitions had grown beyond hotels. Then-CEO Jim Reilly, two years into his second stint as head of the agency, wanted to spur private development and make the neighborhood around the convention center into a year-round destination for tourists and Chicagoans.

Based on the usual suspects Mayor Joe Hogsett named to the Capital Improvement Board, there's no reason to believe a pause is going to be placed on Visit Indy's planned building boom, which includes not just plans for an expanded convention center but also a new taxpayer-funded soccer stadium for Indy Eleven. Build and they will come. That's all they know. 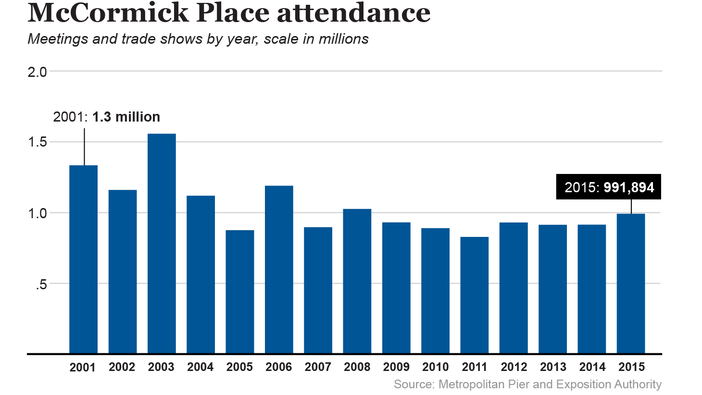 more shiny new buildings downtown and another 9-figure trough for the cronies in the construction and engineering business to feed at? sounds like a win-win to me.

Legoland with dollars pilfered from the public treasury is not progress. It's unConstitutional.

Gary, in your time as a downstate Illinois resident did you ever notice how Chicago got what it wants first, and the rest of the state gets whatever is left? Really pissed off a lot of folks in my east central Illinois city. I've heard a lot of folks outside of central Indiana looks at Indy the same way.

Why would anyone go to Chicago? The traffic is horrible. It's full of weirdos, foreigners, wackos, oddballs, waif-men, Boystown, Cubbies. It's impossible to drive there. There are red light cameras. Cops are everywhere. Liberals are everywhere. And it snows.

Big billboards in Vegas offer machine gun shooting. Orlando has an ocean nearby. Both have palm trees.

Chicago has outlived its usefulness and now has wimpy men eating vegan, Paki, and whatever other oddball goofball trendy food the waif-men are into, this year.

It used to be downstate population used to equal the Six Counties (Cook, Lake, DuPage, Will, Kane, McHenry) - after a lot of the agricultural implement industry shut down in the 1980's and other industries cut back or left Illinois for other states/countries now the population balance is heavily tilted towards Chicagoland area. Many downstate cities are shells of their former selves.