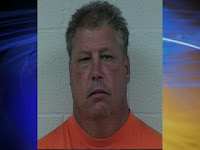 A Logansport man who is the Democratic candidate for state representative in the 23rd District has been charged with attempting to sell cocaine to a confidential informant. WRTV reports on the charges filed against Kerry Worthington, a Logansport bar owner:


A candidate for State Representative has been accused of dealing cocaine and other drug-related offenses.

According to a press release from the Cass County Sheriff's Office, Worthington sold cocaine to a confidential informant.

Worthington is a former Logansport councilman.

Worthington owns Worly's Inn, a Logansport bar, which is located directly across the street from the Cass County Jail, where he is in custody.

"Corruption is as corruption does."
--The Democrat Machine