Sunshine Is All I Want 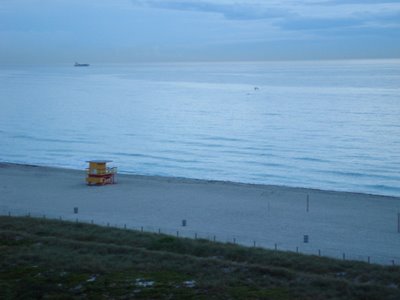 I'm trying to enjoy a few days of vacation in South Beach. I arrived to rain yesterday afternoon, which continued through most of the night. It looks like the rain is going to give way to some sunshine today before it returns later today. It could be worse. Palm Beach recorded over 9" of rain yesterday. This is my view from the balcony of my room at the Marriott.

A quick glance of the online Star indicates there's growing skepticism towards Gov. Daniels' plan to privatize the Hoosier Lottery. Matt Tully wonders whether Daniels has all his "T's" crossed. The Star's editors have doubts about the idea, but they wonder whether the Lottery's balloon release fiasco earlier this week isn't an argument for privatizing the Lottery. They compare the foul-up to the episode of 70s sitcom "WKRP In Cincinnati"--one of my personal favorites--involving the famous turkey drop promotion from a helicopter which went badly awry as the fictional ag reporter Les Nessman reported the fate of the flightless birds from a shopping mall parking lot.

I also see that Jean Burkert, the deputy who accused City-County Councilor Ron Gibson (D) of shoving her while she was trying to control an unruly crowd during Black Expo this past summer, gets her punishment. She is suspended for a day for failing to get prior approval to work the part-time position. Gibson stands accused of battery on a law enforcement officer, public intoxication and disorderly conduct. I also see where Cherrish Pryor, a City-County Council employee, is named by Democratic committeepersons to take the place of Greg Bowes, who resigns to become Marion County Assessor. There's nothing like keeping it all in the family.
Posted by Gary R. Welsh at 7:48 AM

Nothing like playing into the defense's hands by accusing the accuser. In this case the 'Rat wagons were circled and the deputy was punished for doing her job.

As it reads on my Murphy's Law poster: No Good Deed Goes Unpunished.

What I found curious was the timing of this Star story about the deputy: why was it run now>? By reading the details, it seems she was docked a day's pay but back when? It's unspecified. The event happened some time ago but only now makes the news - peculiar!

I broke the story about the Pryor election only a couple of hours after it happened in a comment online here. The special election was held early Wednesday evening - it only made the Star Friday morning. Kinda pokey reporting it seems to me...

Have a good vacation !

Wilson ( I broke the story ) you should start your own blog !

Same goes for Sir Halistone, whoever he is.

Hailstone has a blog, nobody reads it or comments on it, but he has one...

I'm sure AI was looking for a "Wilson-free" vacation in addition to some sunshine.

Thanks heavens for the "anonymous" comment feature of this blog so some folk can be name-calling assholes without having to take personal responsibility for their insults, cracks and putdowns...

Hailstone has a blog, nobody reads it or comments on it, but he has one...

3000 hits (after subtracting those from my home IP address doing updates, podcasts and such) from about 200 different IP addresses in this month alone.

indyernie said...
This comment has been removed by a blog administrator.
5:29 PM GMT-5

indyernie said...
Thanks heavens for the "blogger display name" comment feature of this blog so some folk "like Wilson and me too" can be name-calling assholes but...and accepting personal responsibility for their insults, cracks and putdowns...

All the latest information on holiday spots bookmarking available here for your viewing.