Is Daniels Pushing Privatization Too Far? 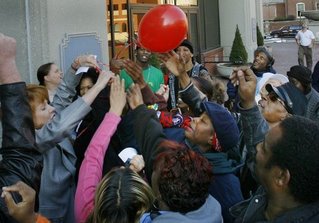 The lease of the Indiana Toll Road to a private company made a lot of sense. Turning over the state's welfare programs to a private company with a checkered past, as is currently contemplated, is playing with fire. And handing over a state-run lottery to a private gaming company? Well, that's just damn stupid. Sen. Luke Kenley (R-Noblesville) captures my sentiments in Mary Beth Schneider's Star story today:

Sen. Luke Kenley, the Noblesville Republican who is chairman of the Senate Tax and Fiscal Policy Committee, said Daniels' budget director, Charles E. Schalliol, briefed key fiscal leaders several weeks ago on the plan to lease out the state lottery to a private firm in exchange for cash.

That money, Kenley said, would go toward scholarships, as well as courting high-caliber professors for the state's universities.

Kenley said the idea drew disapproval from lawmakers, including Republicans. He said he and other lawmakers tried to persuade Schalliol away from the idea because the lottery pays for a number of programs, including teacher pensions.

"I'm a Republican, and I do everything to support the governor, and I'm not very enthused about this," Kenley said. "I can't even imagine what the Democrats are going to say. I doubt that he could get legislative approval for this."

"The governor already has a big agenda," he added. "This isn't the time to be playing high-stakes poker with the legislature to see if they're going to agree with you, especially with a (bipartisan General Assembly) coming in here."

Rep. Jeff Espich (R-Uniondale), who is the ranking Republican on the House Ways & Means Committee is boasting that such a deal could net the state a one-time gain of $1 billion. He bases this on a claim by Illinois Governor Rod Blagoyevich (D) that he could fetch $10 billion for the Illinois Lottery. Let's forget for the moment that Blagoyevich's administration is already under federal investigation for a variety of crimes centered around "pay for play" for the right to invest the state's pension funds. It just might not be the best idea to gamble with our primary source of revenue for funding our own public pension systems.

One company which does seem quite anxious about the proposal is Scientific Games International, a company which outgoing Hoosier Lottery Executive Director awarded a 2-year, $13.86 million contract last year. Someone from the company has been burning up the Internet today checking out the reaction on area blogs to today's news reports about a possible privatization deal (as evidenced by incoming and outgoing hits to this site). A company newsletter, commenting on the Hoosier Lottery contract, quoted Schneider as saying, “Thanks to a fantastic partnership with Scientific Games, the Hoosier Lottery has increased scratch-off sales by $47.7 million last year and we’re looking forward to even greateri ncreases over the next two years.” She added, “Not only are we excited about continuing innovative ways to increase scratch sales, but we’re working very closely with Scientific Games to develop new approaches to increase online games.”

Schneider, incidentally, suffered a scratch to her face today when a melee broke out as she released balloons containing free lottery tickets. Someone didn't think this one out too well in advance.
Posted by Gary R. Welsh at 6:11 PM

Perhaps he really wants to follow through on the OMB suggestion of eliminating the $25+ million subsidy the lottery pays to money loosing horse tracks around the state every year. The lawmakers have been protecting this stupidity for years.

P.S.
Interesting that Church Hill Downs sells Hoosier Park horse track to a Indiana investor group today with the transaction to close in March.(After the lawmakers session is complete)

I was under the impression the boats paid the subsidy to the horse tracks.

Irregardless I'll echo Mr. Kenley's sentiments and say I'm skeptical about this plan. We shall await the details.

I haven't really kept up with the lottery lately anyway (don't play it) until this week with Mrs. Densborn being named director. The lottery proceeds go to the Build Indiana fund (what isn't being pilfered by Regionaires), auto excise tax "cuts", and teacher pensions, what else?

"Irregardless" isn't a word. The American Dad's Stan Smith learned this from his geeky son, Steve, in Sunday night's episode.

"Irregardless" isn't a word. The American Dad's Stan Smith learned this from his geeky son, Steve, in Sunday night's episode.

[something I read online - the human mind can decipher misspelled words as long as the 1st and last letters are correct and have all the letters just jumbled up.]

Isn't it time for Jeff Espich and his Moe haircut to quit already? He's been there 30 years.

I don't like much of what Mitch proposes but this idea deserves a hearing.

The lottery was never intended to fund education. In fact, promsies to the contrary were made at its outset, but Gov. Bayh vetoed those ideas.

My thought at the time, which hasn't changed, is that Indiana needs to step up and find legitimate ways to fund educational needs. We're always looking for the easy way out, and our public schools and universities go from biennial budget to budget scratching for money.

It's a lousy way to advance the state's status as a job magnet.
The rest of the country understands what we're doing. SHortchanging our future.

Because the agricultural-industrial interests who dominate our budget-writing process want it that way.

It's stupidly against their best long-term interests, but look back at history. It's not changed one iota.

In Washington, where Money-bags Mitch got his training as a borrow and spend conservative, he learned that it is actually called Piratization.

US Secretary of Education Margaret Spellings wants a national dialogue on the accessibility, affordability, and accountability of higher education.

Indiana should join this discussion before supporting Mitch Daniels plan.

The State lottery used to put its proceeds into the "Build Indiana Fund" to fund capital expenditures not operating costs such as education.

What ever happened to the "Build Indiana Fund" after lawmakers got caught with there hands in the slush fund cookie jar?

Let's hope the Governor is getting us warmed up to the idea of a much needed future of privatizing every possible function of government. State and federal government (because of its inherent bureaucracy) runs at about 40% overhead, while private business, in competition, operates at around 18% to 22% overhead.

Currently the government has a "monopoly" on many services (including tax funded education) that be performed easily, more efficiently, and with higher quality within the competitive private sector. Let parents and children decide who they want as educators and let government oversee the minimum standards. I predict in this model most schools will far exceed minimum standards because they will be competing for the tuition tax dollar controlled by the individual parent and student.

I suspect our Governor already understands that the only salvation for education lies in privatization. My dream is that he will push it during his current term, if not I possess every hope he will make it his legacy for Indiana.

If every child in this state had a choice of where his/her government guaranteed education took place, I am sure over the next couple generations we will see a substantial decrease in crime and the beautiful actualization of meaningful contribution from a greater number our youth.

One upon a time our politicians served not as career, but as duty to give a few years of service in their prime to their country. Sadly, many politicians use their elected positions to gain personal wealth and power. That is not what our founding fathers intended.

Nice blog. If you are feeling down a smile is just a click away.

I've played the TN-Lottery, but got tired of never winning any money, but now I've better my chances of winning the lottery by playing e-lotto. I've already won more than a couple of times, but nothing big yet. Happy Holidays everyone.