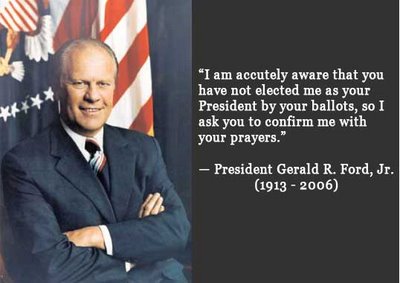 He was born Leslie Lynch King, Jr., but the divorce of his parents and his subsequent adoption by his step-father brought him the name we knew him as, Gerald Rudolf Ford, Jr. A football star at the University of Michigan, he turned down offers to play professional football for the Green Bay Packers and the Detroit Lions to go to law school. He served his country during World War II in the Navy--nearly missing death aboard the USS Monterey. He spent 23 years in Congress as a representative from Grand Rapids, Michigan, rising to the House Minority Leader's position before President Richard Nixon appointed him to fill the Vice Presidency vacated by Spiro Agnew in 1973. He became the first president ever to assume office without being elected either as president or vice president in 1974.

On an Indiana note, the 25th Amendment to the U.S. Constitution provided for the appointment of a vice president by the president, in the event of a vacancy, and confirmation by the U.S. Senate. It was authored by former Sen. Birch Bayh (D-IN). If the 25th Amendment had not been in place at the time of Agnew's resignation, the office would have remained vacant. Upon Nixon's resignation in 1974, the then-Speaker of the House would have become president. If memory serves me correctly, that man was Rep. Carl Albert (D-Oklahoma). So in a way, Ford owes his presidency to Birch Bayh.

While he failed to win election to the office in 1976, he came much closer than anyone expected when he polled 48% to Jimmy Carter's 50%. If Ford had won a close vote in the state of Ohio, he would have been elected president in his own right in the electoral college vote count, if not the popular vote. His time as president is most remembered for his pardon of Nixon. Although some would argue it wasn't a smart political move and cost him his own election, most historians agree that it was best for the country. I remember him most as the last president to use the presidential veto with any regularity. He vetoed 65 bills--more than any other president in modern times. I also think of the people who served in his administration. President George H.W. Bush served as his Director of the Central Intelligence Agency. Donald Rumsfeld served as his chief of staff and Defense Secretary. Vice President Dick Cheney served as his chief of staff.

Dead at 93, he was the longest-ever living president, edging out Ronald Reagan by a few months. I think history has and will continue to judge Gerald R. Ford favorably. Whether you agreed with his politics, he truly was one of the more decent men to serve as our nation's Commander In Chief.
Posted by Gary R. Welsh at 7:41 AM

So what you're saying is that if Ford's dad had appointed a couple of Supreme Court justices, then he would have been elected in 1976? You know, like the Current Occupant? Sorry - the reference to Ohio was too tempting to resist.

President Ford did a good job of healing the country in a constitutional crisis, and I agree with you that history will judge him kindly. He didn't do much else, but I think what he did was enough.

A very, very nice man, almost incapable of national political nastiness required to be elected president. His successor, Jimmy Carter, was much the same. No coincidence that despite the electoral defeat, he and Carter became very close friends almost immediately after 1976.

I'll forgive him for two of his appointments which thrust people back in our faces under W--Rummy and Chaney. Hateful doesn't even come close to decribing those two.

Decent folks seemingly cannot win the presidency. Look at the crop left standing today for 2008--if you beleive the national pundits (I try hard to dial in some common sense) Obama may be the most-decent one there, and he's got zero security/foreign experience.

The remainder are some of the most ambitious, greedy, calculating and angry-acting candidates we've seen in along time.

God rest Gerald Ford. He earned a spot in heaven.

Godspeed Mr. President, give our regards to Bob Hope when you get there. Just don't forget your clubs.

How freaking IRONIC is it that from the grave, this good man tells us, via Woodward, how misguided Bush's Iraqi policy is?