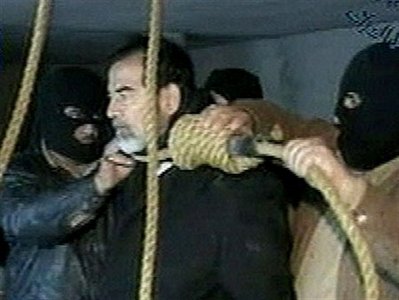 Regardless of how you feel about the death penalty, it is difficult to argue with today's execution of former Iraqi dictator Saddam Hussein. The number of Iraqis who were killed at the order of the tyrannical ruler number in the hundreds of thousands. Sadly, Hussein had supporters to the very end who crowded into the streets to protest his execution. The executioners, shown in the AP photo above, hide their own identities to protect themselves from the assassins who freely roam the streets of Baghdad. At least 31 people were killed today when a bomb exploded in the middle of a fish market hours after Hussein's execution. His death offers little hope the violence in Iraq will end anytime soon.
Posted by Gary R. Welsh at 8:59 AM

"Regardless of how you feel about the death penalty, it is difficult ot argue with today's execution of former Iraqi dictator Saddam Hussein."

Really? I would think that if you believed that the death penalty was categorically wrong you would have a pretty easy time arguing with the execution. I've heard this canard passed around a lot today: "Saddam was such a horrible person that no one can or should object to his execution." If you happen to believe that capital punishment is contrary to your understanding of the value and dignity of human life, not only can you object, but you should object. If you don't you have a pretty impoverished concern for consistency and principles.

In fact, if you happen to believe that every person deserves a fair trial as a human right, then Saddam's execution should also be fairly repugnant to you.

If you are a champion of the universality of human dignity and procedural fairness, excusing or celebrating the execution of Saddam Hussein is situational ethics at its most pathetic.

Excuse me, but could you explain to me how Saddam was not afforded a fair trial--one that seemed to go on for more than a year? Do you suggest he isn't guilty of killing hundreds of thousand of Kurds? I do not oppose the death penalty. What I oppose is the uneven hand at which it is applied in this country. That's the strongest argument for doing away with it altogether in my opinion.

If you don't believe that the "death penalty is categorically wrong" because it is "contrary to your understanding of the value and dignity of human life," then I obviously wasn't writing about you as one of the people who should object. Of course those people do exist and there are lots of them (they include everyone who follows the Roman Catholic Church's teachings on the death penalty). So my point was not that you (AI) were being inconsistent, so much as you were being stupid if you honestly thought that no one could or should argue against Saddam Hussein's execution "regardless of how [they] felt about the death penalty." There are millions of people in the United States who object to the principle of capital punishment (delineated from objecting to capital punishment as it's applied, as you do) and those people can and should object. The belief that there is universal approval of this execution is shallow and silly.

1) Length of trial has absolutely nothing to do with the fairness of the trial.

2) Saddam wasn't on trial for "killing hundreds of thousands of kurds." He was on trial for killing 148 men and boys from a village north of Baghdad. He claimed the executions were in response to an attempted assassination that emanated from the village. He may well be guilty of killing tens or hundreds of thousands of Kurds, but a basic tenent of procedural fairness is that you are convicted because of the crime for which you are accused and evidenced is presented, not for other crimes you may have also committed but for which you are not being tried.

3) Without getting into the details of the trial, most legal experts would contend that Saddam's trial fell short of the standards established for International War Crimes. Among other things, three of his defense attorneys were assassinated over the course of the trial. Top government officials manipulated which judge presided over the trial and placed pressure on the judges to deliver a speedier conviction and execution (That pressure led to the first Chief Judge, Rizgar Muhammad Amin, to resign in protest). Prosecutors were allowed to introduce evidence and witnesses without notifying the defense or giving them an opportunity to examine them. For a pretty thorough exploration of the flaws of the trial: http://hrw.org/reports/2006/iraq1106/

4) Saddam may have been (and almost certainly was) guilty of the crimes for which he was accused, and guilty of many more crimes in addition. None of that matters to the simple question of whether he received a fair trial. That question relates more directly to whether the trial was procedurely manipulated to obtain a faster verdict or because the powers that be of Iraq simply didn't feel he deserved a fair trial. And perhaps you think that Iraqis are justified in their feeling that Saddam didn't deserve a fair trial. Fair enough. But that position is straightforwardly and obviously at odds with the belief that as a matter of principle all people deserve fair trials--a principle, as I understand it, that most people in the United States at least superficially think they agree with.

You're working on the premise that the DP is "categorically wrong". However it's not. There are some that through their acts have forfeited their right to live. A criminal takes a life with malice, the criminal forfeits his own life in the process. Whether its one during a holdup at a Village Pantry, thousands like Saddam Hussein, or over 6 million during the Holocaust as the case with Adolf Hitler.

I can't help but remember WHERE we found Saddam. Not fighting for what he believed in but HIDING in a spider hole. I give his two sons more credit for dying fighting.

Your really incisive and eye-opening commentary on the death penalty aside, I do not operate under the belief that the death penalty is categorically wrong. In fact, on the substance of the death penalty, my position is much closer to AI's than the Pope's. That said, I recognize that there are lots of other people who do believe that the death penalty is categorically wrong. Therefore, writing something like "regardless of how you feel about the death penalty it is difficult to argue with today's execution" is pretty obviously ridiculous since it seems to suggest that lots of people should be willing to toss aside their principled objections just because they thought Saddam was a monstrous person. If that really is the case, it exposes the fact that some people don't really understand what it means to have a principled objection to the death penalty. Or, put another way, the sentiment that AI expressed--which sounds an awful lot like what other people, including the Washington Post editorial page, have expressed--shows a very poor understanding of many people's (devout Catholics and amnesty international for example) actual objections to the death penalty.

Do you get it now, Sir Hailstone?

Yes, Saddam was both a coward and a monsterous, despicable human being. Agreed.

Saddam's dead, no WMD's and Iraq has had several elections - so why are US troops still dying daily in Iraq?

The inconsistency of US policy toward Saddam, as opposed to our treatment of other terrible and dangerous foreign dictators, is too obvious to waste time on here. Can you say NORTH KOREA? We tromped into Iraq for a variety of reasons - and I believe that none of them were good - but "bad bad Saddam" was so far down the list that it is more in the "rationalization" category.

Bush I gave weapons to Iraq

Iraq used the weapons on Iran

Bush II thought it was wrong and now that he has kicked that behive of Iraq, we'll all be stung sooner or later.

When the South decided to withdraw from the union, Lincoln decided to settle a political question with the death of 600,000 Americans. It seems when it comes to Lincoln, he and the Army of the North could commit every atrocity including starving prisoners to death and summary execution in the thousands, yet Saddam was a tyrant for trying to keep iraq from splintering and causing the death of over a million (and counting) Iraqis.

Seems the victor gets to write history, but in the end it may not be the Americans writing history on the Iraq War.