Mayor's Night Out On Near Northside 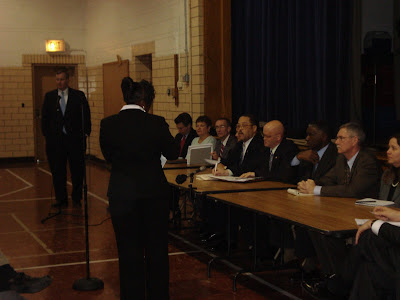 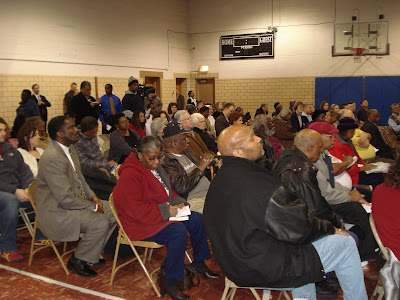 Mayor Greg Ballard and more than a dozen members of his administration met with neighborhood residents at the Jubilee Center this evening on the city's near northside for a question and answer session covering variety of community concerns. Topics covered included homelessness, the police lawsuit, streets and sidewalks, neighborhood lighting, abaondoned homes, restoring offender, crime prevention and property taxes.
--On the police lawsuit, Mayor Ballard assured the audience nobody was going to lose rank, although the administration is struggling to figure out how to deal with the requirements of an earlier federal government consent decree ordering the city to hire more minorities at the same time it is facing a new lawsuit brought by the federal government charging IMPD with discrimination against white police officers in promotions. Whatever the future holds, Ballard assured the audience tonight that the police department makeup would be very diverse.
--Repairing the city's streets and sidewalks is no small task according to DPW Director David Sherman. He says that it would take $900 million to bring up all of the city's streets and sidewalks up to satisfactory condition. Obviously, there's not near enough money in the budget to come close to addressing those needs.
--Mayor Ballard emphasized the importance his administration is placing on addressing the abandoned home problem. He intends in the coming weeks to hire a full-time person who will do nothing but combat the abandoned home problem in the city. "We're going to have someone driving this train," Ballard assured the audience. His attention to the issue is based on his belief in the "broken window" theory. He and Public Safety Director Scott Newman assured the audience that law enforcement in this city will be conducting business on the basis of understanding this basic principle. To that end, a community policing officer and Maury Plambeck reported on their efforts to close a problem nightclub at 24th & College. Administration officials assured neighbors that problem was going away without offering too many specifics, although Plambeck noted that the business had been issued a zoning violation last week. As I drove by the problem establishment on the way home, it appeared closed, hopefully for good.
--Newman emphasized how hard he would be working to "restore faith" in the ability of the city's law enforcement to combat crime. There will be "change in the culture" of how crime is combatted. He emphasized the need for the system to be "punitive" towards probation violators. In explaining the transition of IMPD control from the Sheriff's department to the mayor's office, Newman thanked Sheriff Anderson for his contribution in succeessfully unifying the two police departments, which drew applause from the audience. He assured the audience that all the claims of dissension and infighting between the mayor's office and the sheriff's department concerning the transition were "phony." He described the transition as moving along very smoothly. And if you are a speeder, look out. Newman says he wants stepped up traffic enforcement as a means of getting guns out of the hands of felons. He says routine traffic stops are an effective and legal means of accomplishing this objective. He wants to utilize reserve deputies for this effort, who he thinks are currently under-utilized.
--On property taxes, Ballard says it is still his preference that property taxes be eliminated altogether, which drew a resounding applause from the audience, but as a fallback given the fact a repeal isn't going to happen this year, he supports the hard caps without exemptions proposed by Gov. Mitch Daniels. Ballard complained that long-term school indebtedness in Marion County is too high--$1.8 billion in total. He thinks school projects needs to be scaled back and more practical. We need to be more concerned about the quality of the education product than the size of our school buildings he said.
--On education, Ballard touted a plan he has to create a public-private partnership during the next year to help tutor school-age children in grades 1-8 in our public schools to help improve their education attainment. Ballard rejected one questioner's assertion that charter schools did not perform as well as the public schools. He said that all the data he had reviewed contradicted that assertion, and that he thought charter schools were doing a good job. He didn't elaborate on what his future plans are respecting charter schools.
--Deputy Mayor Olgen Williams says the City will be rolling out by this summer a rebirth of the Front Porch Alliance. He says there will be plenty of grant opportunities for "faith-based" organizations and neighborhood groups. "Peace in the streets" is the theme of these crime preventions efforts. An offender restoration program is likely to play an important role in that initiative. Mayor Ballard placed a high priority on the need for a program, hinting that he might even support awarding tax credits to employers who agree to hire ex-offenders.
--Finally, Mayor Ballard defended his support for another Super Bowl bid. He believes that hosting a Super Bowl offers an "enormous economic benefit" to the city. Ballard said the investment of any public dollars in this effort will produce a 10-20 fold return on investment. Ballard did not say how much the public investment in the Super Bowl event would be, although most of the upfront costs have been pledged by the local business community.
Posted by Gary R. Welsh at 7:47 PM

In a campaign release titled "No Bowl Bid Until We Solve Police Shortage", Mr. Ballard said "Everyone likes the Super Bowl, but it makes no sense for the mayor to spend money, time, energy or political resources on a do-over on a failed Super Bowl bid when we have a serious police shortage and rising violent crime."

I wonder how many police friends Ballard lost when he decided to prioritize the Superbowl?

True Wilson. But most of that is solved now that he has accomplished his other goal of having us placed under him.


And Gary, as for the Sheriff unifying the two departments, you owe me a computer keyboard for spitting my drink all over laughing.

He and his administration did more to hinder this merge then help. We will come through just fine now that he is gone and professional policing can take place again.

Were any city council members there tonight?

Neither Nytes nor Carson were there. I don't know if the councilors normally attend these or not. I would if it was my council district. Former council president Steve Talley was there. I guess he's now in charge of animal control (no pun intended).

Just to show you how ignorant Greg Ballard is, he has retained most of Bart Peterson's corrupt administration including Steve Talley! This is the man that was happily used by Peterson and Frank Anderson to force the police merger down the throats of real police officers. Now Ballard has hired Steve Talley and many other corrupt Peterson flunkies; but we have a "new mayor with a "new plan" Right? Greg Ballard is just Bart Peterson dressed in a fat suit!

Greg Ballard sitting at the table with the very people who campaigned "against him".Now that is funny! Sellout!

What dufus would schedule something
like this at the same time as
an IU-Purdue basketball game?

That being said, damn it, I must admit, Wilson is right. Words are powerful, and candidate Ballard firmly, in writing and in person, poo-poohed the Super Bowl bid. It was a common campaign line.

His support now is hypocritical. I happen to think the Super Bowl bid is awesome for the city, but make no mistake: Ballard got plenty of mileage dumping on it last fall.

He evidently heard the altar call and caved in to business interests. Nothing wrong with that.

In fact, a good Marine Mayor would step forward and say just that: "I was wrong last year, and now I see the light."

10-20 fold return on investment -What a crock! There is no evidence that any Super Bowl has any long-term or, many times, any short-term economic impact. Jacksonville spent $12 million dollars of city money on the Super Bowl four times more than they anticipated. A significant amount of that underestimation related to security costs. If anyone thinks that the city is not going to have to piss a lot of money down the sewer, they are in for a big surprise.

Futhermore, any economic impact, whatever that might be, would represent a miniscule amount of the economic acitivity in the City of Indianapolis. People throught around numbers about the millions of dollars of impact, without constrasting that with the millions of dollars spent on facilities and the extra costs associated with holding the events that the city has to spend.