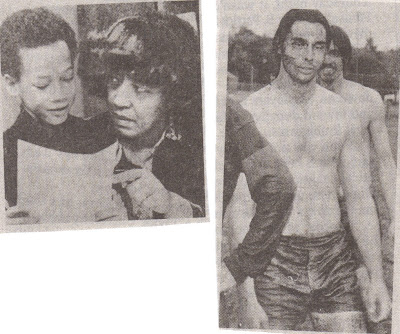 I found the Star's choice of photos to use on the respective 7th District candidates with their biographical pieces a little unusual. No surprise that the newspaper would show a photo of a young Andre Carson with his grandmother, the late U.S. Rep. Julia Carson. I think this is the first time, however, that I've seen the newspaper use a shirtless photo of a political candidate in a news story. I thought for a second I was looking at an Abercrombie & Fitch advertising photo when I saw a shirtless, collegiate Jon Elrod covered in a little mud after playing rugby with his teammates. Your thoughts?
Posted by Gary R. Welsh at 1:33 PM

Nothing short of a disgraceful hit piece. Indy...this aint your Grandpa's Star that was once run by the Pulliam's.

This newspaper is as disgraceful as the NY Times...a total fishwrap!

Well Indy you vote for what you deserve. Your district is a laughing stock. Please show the Country that you can take back your district and be an agent of true change.

I thought Jon did fabulously in exposing Andre this morning...a DCCC robot full of soundbites, rather than sound thoughts.

I almost crapped my pants laughing when Tully asked Andre how he would pay for his utopia of dreams for America....hahaha...you dems are funny...

Considering Jonathon Elrod on TV comes across as a nervous, nerdy twerp in a business suit, this humanizing photo of him certainly helps to flesh out his image.

I'm guessing Elrod would have had to provide this picture to the Star for use. Is it wrong for them to use any photo provided by the candidate himself?

Believe me, the Carson campaign was smart enough not to show a photograph of what Andre looked like in his late teens and early 20s. His "Hammer Time" pictures wouldn't win him any votes.

If I recall Andre in his late teens, early 20s, he was sharply dressed in a suit and tie. I seem to recall a particular golden-colored suit.

I'm still not voitng for him, however.

It should be easy to get pictures of Julia's grandkids. Just pull up some mugshot!

Wilson Allen just called a State Representative a nerd and a twerp. You are a shameful man.

How is the dumpster diving coming along on Jon Elrod Mr. Allen? You aint got jack!

A single John Elrod with that photo. What's the Star trying to imply?

You must have seen a different show than I did if you think that Jon did a fabulous job of anything except showing that he is was inexperienced and in over his head.

OOMG.. u HAD to post that.. I blushed when I perused that this morning.. Damn, would love to see those twins.

The gay vote just locked in.

Julia has that look on her face which seems to be saying, "Who the hell fathered this child?"

Easy Wilson, you're not his type.

Photos work for me. I'd choose a rough, tough fighter over a grandma's boy any time.

"That's right, André! Using this type of math will get you a lot of taxpayers money for your own personal use"

"Thanks, Gramma! I hope to be a public leech someday!"

The Rag is just that. If you want news in this town the IBJ is the place to turn.

Now I've seen it all. Wilson, if you think personal appearance is part of all this ( "A&F knows chaste beefcake sells clothes") I'm wondering if you subscribe to tit-for-tat turnaround:

If a candidate has aging camera-toting dolts making fools of themselves in public and on blogs, does that turn votes away?

Oh yeah, on issues your guy loses, too.

Hey, 2:00 PM, check yourself...the paper wasn't a national model of impartial journalism under the Pulliams, either. And Pulliams, plural, does not have an apostrophe.

I thought this morning's side-by-side comparison was the best poliical reporting they've done in a long time.

[1] I find it insulting that some people think that gays still vote because they like the physical looks of someone. As Elrod about when he wants to bring the men and women home from Iraq.

The man with the orange hair, bad teeth, fat a** and a gut with it's own zip code calls Jon Elrod names in regards his physical appearance!!! You are a scream, Wilson. Did you break all the mirrors in your hovel?

There goes that meanness again.

How much money is a photo worth of Andre Carson dressed in a crisp black suite, white shirt and black bow tie selling incense and copies of the Final Call in the median on East 38 Street by Lafayette Square?

7:46, I think you may be on to something. If you've got the goods, please share.

I'm sure the GOP photo-fabricators are already busy working on that phoney image right now to throw out in the last week of this campaign...

Considering the mean-spiritedness of this thread, it's obvious the Republicans will stoop to anything nowadays.

I wonder what kind of photos we could find of Jon Elrod????

Wilson!
Here is a self help page you can associate with.

Oh!
One more thing Wilson!
$ 100.00 says no one on this blog knows what the initials
NASCAR represents.

will you take the challenge Wilson?

National Association of Stock Car Auto Racing. You forget I'm a big NASCAR fan, anon 8:49. And I can't post your other comment. You're right, you've had too much Seagrams to drink.

Flipper, with this amazing new thingie called "The Googles" on the Information SuperInnerTubes, one can look up instantly trivia:

Andre, Andre, Andre, is that all we can talk about on this blog? We have an idiot mayor running around talking about Chinatown and we are picking on Andre Carson. Greg Ballard is a laughing stock! I would rather have Andre Carson as mayor than Greg Ballard. Talk about stupid! Did you hear this "so called mayor" at the state capital? Bart Peterson was an arrogant crook and now we have an arrogant, idiot as mayor! Talk about that!

Wilson wrote:
"Considering the mean-spiritedness of this thread, it's obvious the Republicans will stoop to anything nowadays."

Let's see: In the second installment of this thread, someone called Jon Elrod "a nervous, nerdy twerp in a business suit." Who injected that "mean-spiritedness" in this thread?

Why, Wilson, of course, the Queen of Mean.

Sorry Wilson, the photos are not being handled by the GOP. You may want to contact the Southern Poverty Law Center (SPLC) and ask Morris Dees about their file on Andre Carson.

"That's right, Andre! Only 25 people is this precinct, but I gots 55 votes! You're learning to count the Carson way!"