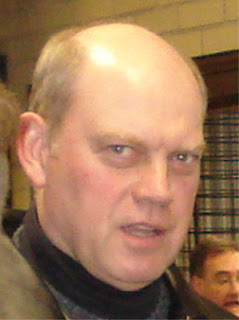 Star editorial writers weigh in against Mayor Greg Ballard's decision to appoint Simon lobbyist Robert Grand to the Capital Improvement Board, arguing the Board needs an "independent leader." Grand's firm represents the Indiana Pacers, while Grand represents Simon Property Group. The relationship with the Simons is "too close for comfort in what is supposed to be a climate of reform," the editorial opines. As the Star described the relationship:

Grand is managing partner of one of the city's pre-eminent law firms, Barnes & Thornburg, which has represented the Indiana Pacers and the Simons, who own the team. The Pacers are the prime tenant and most favored user of Conseco Fieldhouse, which the CIB manages on behalf of the taxpayers.

During last year's campaign, the editorial reminds us that Ballard offered an ethics reform package which included barring lobbyists and others with a financial interest from serving on boards and commissions. "Ballard has gone so far as to offer a six-point proposal for conflict avoidance, including a measure to 'prohibit registered lobbyists or persons with a financial interest from serving on any board or commission that directly affects or deals with their lobbying or financial interests,'' the editorial reads. So what gives? "The mayor insists that Grand, who has not lobbied personally for the Pacers but has worked directly for Simon Property Group, has more than covered matters via a letter pledging to keep himself and Barnes & Thornburg out of CIB business involving their clients," the editorial answers. I might add that the letter agreement was signed off on by the City's Corporation Counsel Chris Cotterill, who just happens to be a former employee of Grand's at Barnes & Thornburg.
As an attorney, reading that letter agreement strikes me as a slap in the face at the whole reason behind having conflict of interest rules for the legal profession in the first place. As the Star editorial points out, in the event Grand actually abided by the terms of the letter agreement to create an "ethics screen", he would not be able to provide the leadership the Board needs from him. "However, that can be a cumbersome task, considering how prominent the Pacers are in CIB deliberations," the editorial says of the letter agreement. "And as a former state ethics commission chairman pointed out in Brendan O'Shaughnessy's article in The Star on Saturday, the self-screening would reduce Grand to a partially functioning board member." "If, for example, the Pacers do seek to renegotiate their lease, as speculation has it, then Grand would be a quarterback sitting out the big game."
Laying aside the concerns about Grand's functionality, ultimately the public perception should weigh heavily against Grand's appointment to this important post according to the editorial. "Last but far from least, there is the question of perception. Grand's connection with the Pacers and the Simons would always color news about the CIB were he to be in charge, and appearance of conflict of interest is enough to undermine public confidence in the board's highly sensitive work as manager of Conseco, the Indiana Convention Center, and the pro football and baseball stadiums." The editorial concludes, "The mayor should find another mission for the well-credentialed Robert Grand and keep looking for a CIB chief." "If that's not the letter of Nov. 7, it's certainly the spirit."
This decision has left even Ballard's most ardent supporters scratching their heads. Why would a new mayor go to such great lengths to burn up good will with the public, which expected he would lead an ethical administration? By all appearances, Ballard was elected with no strings attached, but the appearance he has given from appointments like Grand's is that he's loaded down with all sorts of baggage. He should have surrounded himself with at least one person who was sensitive to these sorts of issues. His chief of staff, Paul Okeson, most recently worked as a branch manager for an engineering firm with city contracts. Okeson's firm donated $10,000 to Ballard after the election. It gave $10,000 to former Mayor Bart Peterson's campaign before the election. This past weekend, Ballard and Okeson traveled to the Super Bowl in Phoenix, along with other members of a local team working on yet another bid to win a Super Bowl event for Indianapolis according to the Star's business reporter John Ketzenberger. Ballard has clearly forgotten the ethics pledges he made as a candidate and tossed aside other more important priorities to curry favor with the City's ruling elites. If Indianapolis is lucky enough to win that 2012 Super Bowl bid, Mayor Ballard is unlikely to be around for the party at the rate he's going. Voters may just give him the boot in four years just like they did Peterson this past November.
Posted by Gary R. Welsh at 7:34 AM

What some Ballard supporters seem to not understand it that there is absolutely no difference between what Monroe Gray did and what Bob Grand is doing.
It matters not whether a person's conflict of interest comes as a result of pouring concrete or preparing legal cases. It's taxpayer money that ends up in the concrete man's company pocket just as it ends up in the attorney's firm's pocket.
I'm not defending Monroe Gray but just because Bob Grand is member of the city's elite "accepted" club of power brokers does not give him any more legal privilege than that afforded to others like Gray.
No one should be surprised by Ballard's appointments. The writing was on the wall the day he began putting together his so-called "transition team".
It's no real big secret how Indianapolis has operated for decades. Yes, we can toss Ballard out in four years but it doesn't matter because the monied and connected will still run this town.

So....Let us examine the credibility and honesty of our Mayor Greg Ballard! Is there anyone in the city that still believes that this dirty, chubby politician actually intended to keep the many promises that he made during the campaign? He is an evil, liar and is manipulating political appointees into positions to financially benefit themselves and Greg Ballard! The Taxpayers of Indianapolis are being robbed! AGAIN!

Have you noticed how much Robert Grand looks like Dennis Kozlowski, the Tyco executive who spent $6,000 of his company's money on a shower curtain??

“You must actively communicate the expected ethical behavior.”

The Ballard supporters do in fact understand that there is no real difference between Monroe Gray and Bob Grand. The problem is that Greg Ballard is not ethical enough to know the difference. This arrogant fat man is a real piece of work!

I would just like to be able to PhotoShop some Groucho Marx glasses onto this pic.

I agree with your overall premise, Gary. But this Democrat would in no way compare Grand's appointment, to the multiple acts committed by Monroe Gray, who disrespected voters and acted as if the council presidency was his entitlement, for over a year. And if Grand is anywhere near as arrogant as Monroe, well, we're in for rough sledding. Although the letter Grand authored is close to being that arrogant...it is still one isolated act so far...no pattern of stupid arrogance like Monroe. Yet.

That opinion is pretty widely-held in the party, too.

That said, Grand should do Ballard a favor and pull the plug. I can name a dozen Republicans who would do this job well, and not bring such a bag full of conflicts to the table.

It's inviting problems for Grand to stay.

Please don't compare Bob Grand to a sleeze like Monroe Gray. Bob is a mover and shaker in Indy and Monroe is a corrupt crook. There is no comparison.

But just look how cute Bob Grand is!

Who picked up the tab for Ballard to go to the Super Bowl? FYI All the city people including the mayor paid their own way last year even though the city was bidding for the Super Bowl.

To flipper, for what its worth.
Someone like Grand, in such a powerful, behind the scenes position, should be held to an even higher level of accountability than that of the public position of a ccc member. As well, factor in the IQ factor and you should have even more concern regarding integrity vis a vis Grand. These are the folks who should really concern you. People like Gray, well, they have no integrity, don't pretend to have, hence you know what you are getting. Grand on the other hand, well, be careful.

Flipper you are a complete idiot! Perhaps prostitute would be a better word! Ballard pissed on you just like he did the other common people who supported him, while he lectured on ethics in local government! Get Real!

He is listed in The Best Lawyers in America® in the area of Municipal.
Bob Grand will be Friday’s guest on School Talk with Emerson to talk about voting and the power of one vote.
“School Talk” premiered on September 15, 2003. The show airs live on Friday mornings at 7:00 a.m. and replays on Sundays at 2:00 p.m. Ben Davis seniors Rachel Calhoun and Sean Dunham produce the program and Community Outreach Coordinator Emerson Allen hosts the show. The show deals with issues that involve students, teachers, parents, and the community at large.