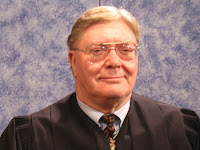 Judge Kenneth H. Johnson has joined Judge Gary L. Miller in challenging the decision of GOP precinct committeepersons not to re-slate him for nomination to the Superior Court in the May primary. Judge John Hammel, who was also not slated last weekend by the GOP, did not file for the May primary. That means Republican voters will have ten judicial candidates from which to choose for the eight open slots on the Marion Superior Court. In a survey taken by the Indianapolis Bar Association, 82.6% of the respondents gave Judge Johnson a favorable recommendation, which is a higher rating than that earned by some of the other judicial candidates the GOP slated for the May primary. Democrats will have eleven judicial candidates running for their eight spots in the May primary. Also, Alex Murphy is challenging Louis Rosenberg, the Democratic slated candidate for Circuit Court judge, in the May primary. [Update: It looks like Alex Murphy has withdrawn. His name no longer appears on the list of circuit court judge candidates for Marion County]. Voters will have choices after all.
Posted by Gary R. Welsh at 4:07 PM

Both Johnson and Miller stated prior to slating that they would abide by the decision of the party slating. Both of these men have broke their word and now should not be trusted. I for one had respect for both me. That is now long gone since they don't respect the parties slating system.

Sounds like Marion County repubs are having some problems. First, the mayor contantly acting goofy now this!

I'm a Republican ward chairman. I applaud what Miller and now Johnson have done. Slating, even though much better than it was with Sweezy and Keeler, is still not even remotely a fair process. Why have "respect" for something that is bad for the party and doesn't produce good candidates?

Slating can serve a good purpose. But neither party chair has the political muscle to crack the whip any more, so it's largely a paper tiger.

For instance, there are four five candidates for the 7th district Democratic Congressional seat. And the slated candidate, Andre Carson, will likely lose May 6.

But judges are different. They're forbidden from most partisan political activities, so they're less known to precinct committeepeople. It's a difficult line to walk, for committeepersons and judges.

For what it's worth, Gary, I feel the same about the Bar Association's guide. I know many voters who take whatever the Bar says, and vote exactly opposite. The profession, you will pardon the observation, isn't held in high esteem by the general public. Maybe the IBA ought to think about that when they do the annual survey, then release its results.

Marion County is also one of the few that have a "slating fee", which, in simple terms, means "buying support"

A slating fee buys you support which means advertising and organization. A successful political campaign usually isn't free - the slating fee pays for most of your campaign expenses that the party spends on you.

A funny aside: Democrats now require cashiers checks for the slating fee. A certain notorious perennial candidate (now a Republican) once paid her fee with a rubber check, got slated, couldnt make the check good and then squawked loudly when the party "unslated" her. Oh well...

Speaking as a former candidate, then why do they keep 20% of the slating fee of the unslated candidates. Obviously they aren't getting their money spent on advertising on their behalf.

Anyone who thinks the slating fee just goes to advertising for the slated candidates, is fooling himself or herself.

Based on AI's report about Tim Oakes DUI troubles and more, I think that Judge Ken Johnson should have a good chance at an "upset".

The GOP slating is broke and needs to be fixed. Tom John just passed another stupid rule that no one can say anything negative at the slating and all handouts have to be approved by his insiders.

There are a lot of Republicans that will be glad when Tom John is not longer the county chair.

"The GOP slating is broke and needs to be fixed."

Needs to be done away with and just have primaries like the other 90 counties in Indiana.

"There are a lot of Republicans that will be glad when Tom John is not longer the county chair."

He's stacked the deck to ensure easy re-elected in 2009.

Ken Johnson is reviled in the legal community and in political circles. His arrogance and his belief he is above the law shows why he should not be re-elected. The Indiana Lawyer is replete with articles showing Johnson continues to allow fraudulently filed cases to remain in his court to pad his ego. An average citizen should be scared to have his case in his court

I have always been treated fairly and professionally in Judge Johnson's courtroom. They're are some bad judges out there - Ayres, Moores, come to mind. Judge Johnson though is not one of them. He is certainly not "reviled" in the legal community.

I was at the GOP slating, and I was surprised by the no negative campaign rule and the notion that literature has to be approved in advance. Wasn't there a case a few years ago where Judge Tinder threw out a campaign literature rule that required pre-approval of the literature in order to be used. Slating is a quasi-public event. Not so sure the 1st Amendment wouldn't apply to bar Tom John's rule.

Ken Johnson has actively sought to keep over 1700 cases in his courtroom that were based on the diagnosis of a handful of "doctors" who when they were deposed about the diagnosis in each case took the 5th. Ken Johnson then actively removed the defendants rights for a change of judge. He has been placed on the list of national "Judicial Hellholes" for his rulings. He is reviled by those who are trapped before him. His arrogance will be his undoing. Look at the Indiana Lawyer the facts are all out there. It is embarrasing to the Marion County Legal Community

Anyone know what happened with Alex Murphy? I remember him on the bench before he went to Iraq. He is a little quirky but a good judge who seems to care. Thoughts?