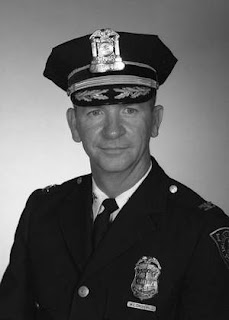 In the 1970s, veteran Indianapolis Star reporters Dick Cady, Harley Bierce and Bill Anderson  performed in-depth investigative journalism into the corruption of the Indianapolis Police Department won them a coveted Pulitzer Prize. The three men placed their lives in great danger and Anderson and Cady were even subjected to phony criminal charges cooked up by the corrupt department and former Marion Co. Prosecutor Noble Pearcy. This month the man at the center of that investigation, former Indianapolis Police Department Chief Winston Churchill, died earlier this month after suffering a long illness. A memorial service is being held in his honor. This was all the Star could muster up to write about the life of Churchill:

A memorial service for a former Indianapolis Police Department chief will be Thursday at the local police union hall.


Visitation for Winston Churchill will be from 5 to 6 p.m., followed by the memorial service and a flag presentation, at the Fraternal Order of Police hall, 1525 Shelby St.

"He served the Indianapolis Police Department from 1957 until his retirement in 1977," said Sgt. Linda Jackson, an Indianapolis Metropolitan Police Department spokeswoman, in an announcement of the service. "He rose through the ranks, becoming chief of police on Feb. 23, 1968, and he led the department until relinquishing the position in March 14, 1974."

Mayor Richard G. Lugar asked Churchill to resign, praising his work, but saying a change was needed to "restore the good morale and proud posture" of the police force following charges of corruption.

Mayor Lugar removed him from his position "following charges of corruption." Was that all day after day of front-page news stories was about back in the early 1970s? I guess if you want to know the real story you'll have to buy a copy of Dick Cady's new book, "Deadline: Indianapolis" on amazon.com. As I've often mentioned before, the Indianapolis Star's reporters today don't believe in reading the newspaper's own archives when compiling stories. Apparently that takes too much effort. And there's nobody left in the newsroom who remembers those days. All are long gone following the newspaper's slow demise after the Pulliam family sold it to Gannett. How sad. Sen. Lugar is ever so grateful of the short memories at the Star. He certainly doesn't come out looking very good in Cady's book. He was hardly leading the reform to clean up one of the nation's most corrupt police departments when he was mayor despite the mythology you hear from the people in Indiana Republican politics who worship him today about his years as mayor.
Posted by Gary R. Welsh at 12:09 PM

Don't you think this may have been an effort by the Star not to "kick the coffin" rather than a whitewash as you describe it? Just a thought.

If you had any clue all the stories about Churchill and the police department he ran that graced the pages of the Star to win that Pulitzer, you wouldn't even ask that question. They have this feature where they recount stories from the past. Today it's Jim Jones.

Probably has more to do with the fact that most of the department wasn't even born when Churchill & crew ran things. There really isn't a tie-in to what's going on now. There couldn't be more than a half-dozen people on the dept. who were even doe-eyed rookies back then.

I believe there are several relatives of Churchill still working for the department. The fire department and the police department in this town are pretty much family businesses. It's quite incestuous.

I have to get a copy of Dick Cady's book.

AI, is there any mention of Marjorie Jackson in Cady's book? There's a mystery for you.

It is no wonder that most Marion County Republicans appreciate Lugar as mayor. He gave them UNIGOV, and Republican or Republican-lite control of Indianapolis.

I met Winston Churchill a few months ago while delivering his medicine. I found he and his wife to be lovely Christian people and I am grossly offended by the implication in this article that he was anything but an upstanding human being. He shared his faith with me and we had many conversations about politics and the state of the world. I am very proud that I was honored in such a way by a brilliant ,kind,interesting,man and my heart goes out to his family. Joy Devine

Joy maybe you shouldn't be offended but take a little history of what a Christian might have been like before they found the Lord. Just because a person finds Jesus doesn't mean that they weren't despicable in their younger years.