Soldier Demoted For Speaking Out Against SJR-7 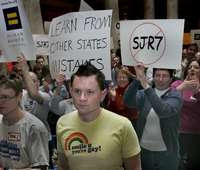 Apparently it's not worth a regular news story when a person serving in our military is demoted for speaking out against discrimination against gay people as Michael Isenhower did last month during the Senate committee hearing on SJR-7--at least at the Indianapolis Star. The Star relegates this happening to its political gossip/humor column, "Behind Closed Doors":

Last month, Indiana National Guardsman Michael Isenhower wore his full camouflage uniform in the Indiana Senate while he testified against a constitutional ban on same-sex marriage.

Higher-ups, he said, quickly demoted him from specialist to private first class for his effort. Isenhower said wearing his uniform to testify before the Senate violated one of the military's codes of conduct. He said he had worn his uniform at the Statehouse to speak out on other matters in the past and was never disciplined.

But when ranking officers read newspaper accounts that Isenhower wore his uniform while speaking against the gay-marriage ban, they took action. Isenhower, a six-year guardsman who lives in South Bend, said he's appealing.

"I don't have any regrets, and I still think it was the right thing to do," Isenhower said. "I swore to protect the Constitution when I enlisted, and this ban is in direct violation of that Constitution."

The punishment hasn't kept Isenhower away from the Statehouse. This past week, he took part in a rally for gay rights. This time, he gave up the uniform in favor of a rainbow T-shirt that read, "Smile if you're gay!"

While the item in the column attributes newspaper accounts about Isenhower wearing his uniform while speaking against the gay-marriage ban, folks should be asking if Sen. Brandt Harshman (R-Wheatfield), the amendment author and staffer for U.S. Rep. Steve Buyer (R)--a fellow guardsman--didn't have a hand in alerting Isenhower's superiors. As for being disciplined for testifying in his uniform, this is clearly a selective punishment meted out to Isenhower by guard officials because of the content of his testimony. Men and women have testified in uniform over at the State House in the past without receiving similar punishment. Isenhower will no doubt be booted from the guard altogether after his superiors read his T-shirt in the photo the Star carried with this item because of the military's "Don't Ask, Don't Tell" policy.
In an unrelated item, the Star's editorial section has a youth piece entitled "Gay Teens Struggle For Acceptance," which is worth a read.
Posted by Gary R. Welsh at 9:54 AM

I found it slightly scary when the Star seemingly outted somebody so publically - complete with photograph. Not good!

Anonymous said...
This comment has been removed by a blog administrator.
10:16 AM GMT-5