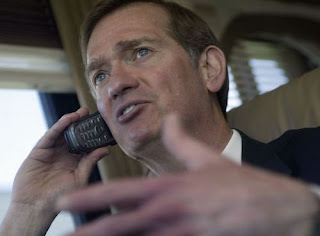 In an ugly display of bigotry against Indiana's gay, lesbian and transgender citizens, Advance America's Eric Miller unleashed a hateful and false attack on a hate crimes bill approved by a 9-1 vote of the House Courts and Criminal Code Committee this week. Spurned by all but one GOP member of the committee, Miller has turned to his faithful to put the heat on conservative Democrats and Republicans in the House in a last-ditch effort to kill HB 1459. Miller asks his faithful, "Should homosexuals and cross-dressers get special protection?" In an e-mail warning of the "dangerous precedent" HB 1459 would establish, Miller writes:

This bill establishes a very dangerous precedent because it would create two classes of victims and punish someone more because of their thoughts. Here are just a few of the reasons why this bill should not pass:


Laying aside the bigoted tone of Miller's e-mail--"homosexuals and cross-dressers"--allow me to address the patently false information Miller disseminates about HB 1459. Let's keep in mind that Indiana is one of only five states in the nation which has failed to enact a law which Miller calls a "dangerous precedent." My old boss and the former Illinois House Republican Leader, Lee Daniels, voted for Illinois' hate crime law back in 1990--17 years ago--that's how far we're behind Illinois.

Just as Miller argued when the Indianapolis City-County Council considered passage of a Human Rights Ordinance, Miller declares that "special protections" are being afforded to "homosexuals and cross-dressers." Miller makes no mention of the fact that these so-called "special protections" are based not only on a crime victim's "sexual orientation and gender identity" but also skin color, race, religion, national origin, creed, disability and sex. Miller knows better than to mention these other groups because he knows it's no longer fashionable to bash people on these bases. HB 1459, in fact, provides no special treatment to gay victims or any of the other covered victims. It applies equally to all groups. For example, a gay person who committed a crime against a straight person because of the person's sexual orientation would be equally subject to enhanced sentencing under HB 1459 as a straight person who committed a crime against a gay person because of their sexual orientation.

Miller bemoans the fact that HB 1459 sets different standards based upon the victim of the crime. Hello, where has he been. Indiana's criminal law is full of such distinctions. Miller suggests a child victim or an elderly victim would be treated differently than a gay victim. Indiana law already provides a number of circumstances under which a criminal may be given a tougher sentence based on the identity of the victim, including children, the elderly, mentally handicapped and law enforcement officers, among others. Lest we forget the passage of a new law just last year which created a new felony disorderly conduct offense for any person who protests within 500 feet of a funeral. That law targeted an extremist religious group which picketed the funerals of fallen soldiers from the wars in Iraq and Afghanistan, arguing that the soldiers deserved to die because America embraced homosexuality. Miller whole-heartedly supported that law!

Just like Miller argued during the HRO debate that employers should be able to discriminate against gays and lesbians in employment as an expression of their freedom of religion and free speech rights, he similarly argues that a hate crime law infringes on a criminal's free speech rights. The degree of a crime for purposes of punishment is based upon a person's state of mind with respect to crimes other than those for minor infractions. The criminal law has always allowed a person's spoken words and actions to be used to infer their degree of culpability. Come on Eric, there's nothing in this bill which prohibits a pastor from standing in the pulpit and blaming gays and lesbians for all the ills in today's society, even if he is committing the sin of bearing false witness against his neighbor.

And isn't it ironic that Miller would be raising free speech rights at the same time he's pushing SJR-7, which will amend Indiana's Bill of Rights to institutionalize discrimination against Indiana's gay and lesbian citizens, as well as other unmarried couples--the very first time in the history of Indiana that our Bill of Rights has been amended to take away rights, not confer them.

It is incumbent upon all liberty-loving folks to denounce Miller's latest rantings, which are purposefully aimed at fomenting even more hate and bigotry against Indiana's gay citizens than he already has with the push for SJR-7. Miller has gone way too far, and it's high time folks called him out for the true bigot he is.
UPDATE: The American Family Association's Micah Clark is double-teaming Miller's effort to kill HB 1459. He's upset Marion Co. Prosecutor Carl Brizzi is pushing the legisation. Notice like Miller Clark focuses on the "homosexuals and cross-dressers." Here's the crap Clark is spewing:

The Indiana House of Representatives will soon be debating a misguided bill that passed out of the Committee on Courts and Criminal Code. The bill, HB 1459, is a “hate crimes” bill that seeks to add additional punishment based upon a criminal’s motive or thoughts, if the victim is a cross-dresser or a homosexual. In other words, a person who beats up a little old lady may get two years in jail. A person committing the exact same offense against a guy in a dress might get five years because he, according to HB 1459, committed a worse crime.

I was particularly disappointed to hear reports that Indianapolis Prosecutor Carl Brizzi made a special trip to the State House to testify in favor of this legislation. Hate crimes not only places a police officer in the awkward position of judging a criminal’s thoughts, it sets up an unequal sense of justice. AFA supports the enforcement of swift and strong sentencing for crime, but in a fair and equal manner. Recent use of such laws in other countries against ministers or people who have merely expressed a moral opposition to homosexuality should be a warning sign that a thought-based penalty is a step in a very bad direction.

Yep, the Klan is back with a vengence but now they wear navy blue suits and red ties instead of a white hood and robe. These people are evil. These bigots lie through their teeth and manipulate their followers with fear. It is time for every person in the GLBT community to stand up and fight this NOW! Tomorrow may be to late.

Wow! I used to think you were stretching things a bit to compare these folks to the KKK, Gary, but this is very revealing. As you point out, the hate crimes bill covers a broad group of folks who've been singled out by hate groups in the past. If Clark and Miller truly opposed it on principle, why do both of them use the examples of "homosexuals" and "cross-dressers" to make their points?

Can't people just accept others for WHO they are, and leave their sexual orientation out of it?

I disagree with almost everything Wilson has to say, not because he is gay, but because he wrong most of the time! Sexual preference is a personal matter, like smoking, drinking, or using illegal drugs. Feel free to hate the lifestyle, but not the person.
Right Wilson?

garyj, Wilson has not even commented yet so why are you hyjacking this thread to pick a fight? Do you actually have a comment about this thread?

garyj, I believe you are an Indianapolis police officer. When you say things like that, it plays into people's worst stereotypes of law enforcement officers and their attitudes towards gay people. A number of your colleagues are gay whether you know it or not. And one of them may save your life some day. A person's sexual orientation is not chosen, and until you grasp that, you're going to approach people different from you with the wrong attitude.

Sorry AI, I'm not a cop. I also said that sexual preference is a personal matter, not choice. I do know a few police officers, and I know 4 gays ones, 1 is openly gay!

Lori, I wasn't picking a fight with Wilson. I'm think he would agree that people should mind their own business and look at the person, not what the person is. (Black, Asian, Gay, or disabled.)

I think Erica Miller is gay..why else would he be so worried about the "homosexuals"

A Special Deputy reserve wagon deputy has been put on "Adm Suspension for posting on indyundercover.