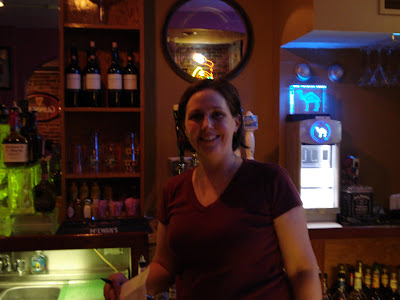 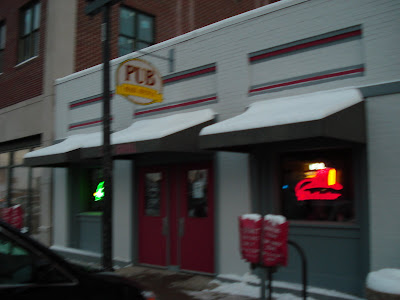 The former 745 Pub & Grill reopened today after nearly two years of dormancy as the Mass Ave Pub. The same friendly charm which made it a popular hangout before is still there. The place was packed with the old regulars tonight as co-owner Tracy Robertson welcomed everyone back. Some of you may recall the unfortunate fate the 745 met a couple of years ago when the developer of the condos next door nearly brought the building down into the huge hole it dug for the underground parking garage. The condo developer finagled with the landlord of the 745 building for months in an effort to purchase it so it could be demolished, but the landlord rejected the offers. The disappointed developer later failed to shore up the building when it dug the huge hole next door, causing the 745's kitchen to collapse into the hole and inflicting serious structural damage to the building. The kitchen staff and noon-hour patrons had to flee the pub for safety. Astonishingly, the city of Indianapolis imposed no fines on the developer despite its reckless mistake, which could have easily cost the lives of the occupants of the 745. Mass Avenue was just never the same to area residents without the 745. Congratulations to Tracy for hanging in there and getting her bar reopened. The Mass Avenue community is happy she's back, even if the selfish developer next door isn't.
Posted by Gary R. Welsh at 7:31 PM

I'm pretty sure the city has no authority to impose workplace safety fines.

That's the provence of the state Dept. of Labor. And if you're waiting for THIS Dept. of Labor to do anything except hibernate, you're wasting your time.

Could be wrong....anyone else know differently?

This place was a charming avenue bistro. Let's hope its reawakening is a good one.

How about construction code violations? If you dig a deep hole immediately next to a standing building, you are required to undertake a series of steps to shore up that adjacent building to prevent a collapse. The city regulates building construction, and there are state building requirements as well.

"Astonishingly, the city of Indianapolis imposed no fines on the developer despite its reckless mistake"

Not that astonishing, when you think about all the other stuff the city looks the other way on.