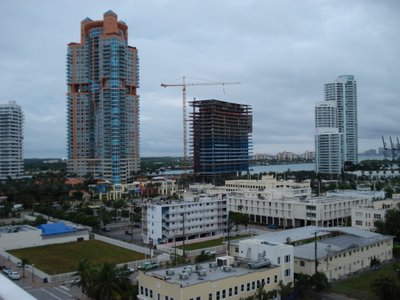 Looking north, south and west from my hotel in South Beach you can see tower cranes at work erecting more high rise condominiums, giving no hint the great real estate boom in Florida is letting up. But things aren't always as they appear. As recently as a year ago, you could put a downpayment on one of these condos while it was still under construction and flip it without ever occupying it for a quick 25% profit. Those days are over for now.

As it rained outside this morning for the third straight day, I caught a political roundtable discussion similar to our own Indiana Week In Review on the public channel. The talk all centered on what the panel was calling "Trouble In Paradise." That real estate boom has officially busted. One of the panelists speculated that some of those new buildings under construction are going to be sitting empty when construction is completed. But the real estate bust is Florida's least concern. People and businesses are being hit hard by rising property insurance as a result of recent hurricanes and the near-doubling of utility bills. Some businesses are being forced out of business altogether while others are looking to move out of state.

The middle class is taking a beating according to this panel. Schools are having trouble recruiting teachers because the pay isn't enough to cover the cost of living. Prosecutors are also struggling to find attorneys to work in their offices because the pay isn't enough. Florida's middle class is being replaced by super rich out-of-staters who spend no more than two months a year in the Sunshine State the panel complained. It seems Florida is having a lot of the same problems as California, which has also experienced an outflow of people and businesses because of rising costs. Maybe things aren't as bad in Indiana after all.

While the central Indiana economy is certainly not without problems, there are benefits to avoiding the boom and bust cycle. From a housing perspective, I believe that Indianapolis is one of the most affordable places to live. I hope the sun comes out soon...

the 3rd straight day? ...no wonder you're having no fun!

Very in-tune with the SE Fla real estate market. It's still good, although it's no longer "boom," and hasn't been for almost a year.

If it continues to rain, drive over and see Vascaya, down south, not far from Little Havana. A beautiful mansion renovated, and used each year for White Party events.

Also home to one of the world's best Cuban restaurants, in Little Havana. Known as The Versailles, it has unbelievably good Cuban beef and salads. And desserts.

Yeah, a Cuban place with a french name...go figure. And just hanging around, you get a feel for all the Cuuban-American political discussions of the day if you understand just a little Spanish.

... and the Versailles is notorious for being the hangout for the really, really rightwing Cuban exiles that believe that Batista was a Communist himself! Dsnny Burton probably gets his meals comp'ed there...(even if he is a little leftwing for that usual crowd!)

Been there 30 times, Wilson, and never saw the crowd you mention.

In what kind of reality do you exist?

I recently published an article on mortgage loans, tips on how to make them work for you and other forms of mortgage financials – here is an excerpt from it, in case you are interested:

Smell a Good Deal for a Real Estate – Try to discover a property that has already got some equity in it, when you purchase it. Equity represents the value of a real estate, a property after you have paid any mortgage or other charges relating to it.

Try to Get a Second Mortgage on the Real Estate – You could try to be more creative and ask the seller whether he would be willing to have a second mortgage on that home. Thus you could set up an agreement with the seller through which you will have to pay monthly an approximate sum of $200, for instance, on $15,000 of the price of the real estate (plus or including the interest rate), for the second mortgage.

Save Some Money to Pay in Advance – Some lenders might give you a full credit if you come with at least a small percentage of the sum. This would grant you supplementary points for getting the credit and would also lower the interest rate – e key point of any mortgage refinance program.

Don’t Give up, Go Further – don’t trust the first broker who tells you that there is no hope for you. You will finally find someone who could offer a viable solution, just keep asking and searching. An alternative is to apply online to mortgage services. Thus your application would be seen by more lenders and you might get more offers to analyze your solvency.

Improve Your Present Credit Score – by not applying to credit cards, auto loans or other loans, if possible. Too many inquiries would also affect credit scores. Another important thing you should do to improve your credit scores is to acquit your current duties and payments on time.

If you feel this helps, please drop by my website for additional information, such as how to refinance a second mortgage or additional resources on mortgage rates.