Weinzapfel To Democrats: Evansville Must Have I-69 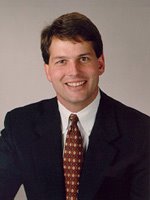 Mayor Weinzapefel's plea came in his annual state of the city address. The former House member told his city:

And speaking of decisions, there is one coming from the legislature or, at least, I hope it’s coming – that has a heavy bearing on Evansville’s future. In my vision, our future Evansville is connected to the rest of the state by I-69. I don’t need to tell anyone here how important this highway is for southwestern Indiana. Right now, Evansville is so disconnected from the rest of the state – and Indianapolis in particular – that the folks up north often call us an extension of Kentucky. And, while they may be joking when they say that, I don’t find it funny when they make laws and divvy out funding as if we were, in fact, on the other side of the river." Weinzapfel continued, "That is just one of the many reasons we need I-69. We need easier access to Indianapolis and the rest of the state. It will help us attract new businesses and help existing businesses expand. And frankly, it will be a heck of a lot more convenient. This is a project long overdue … yet still, as I stand here speaking to you, politicians are dragging their feet up in Indianapolis, arguing about funding. It’s time for them to stop fighting. I don’t care if it is a Democratic plan or a Republican plan; I don’t care if it comes from the governor, the legislature, or even my fairy godmother.

Gov. Daniels and Republican legislators are listening to Mayor Weinzapfel. Are the House Democrats? Or are they more concerned about denying Gov. Daniels' a major political success? If Major Moves fails, the I-69 project will revert to the 20-year schedule--the same one announced four decades ago. That's obviously what has Weinzapfel so concerned.
Posted by Gary R. Welsh at 6:22 PM

Gov. Daniels and Republican legislators are listening to Mayor Weinzapfel. Are the House Democrats? Or are they more concerned about denying Gov. Daniels' a major political success?

Speaking as a lifelong populist democrat,the simple answer to your simply question is: NO.

He is right, the problem is funding. But taxing the motorists of northern Indiana to fund a highway between Indianapolis and Evansville hardly seems fair.