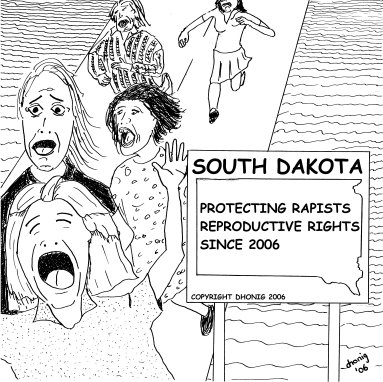 Hypnocrites has its take on South Dakota's new anti-abortion law its governor signed into law yesterday. The new law outlaws all cases of abortion, except when the life of the mother is in danger. No exceptions are allowed for rape or incest.

"In the history of the world, the true test of a civilization is how well people treat the most vulnerable and most helpless in their society. The sponsors and supporters of this bill believe that abortion is wrong because unborn children are the most vulnerable and most helpless persons in our society. I agree with them," Governor Rounds said in a statement.

Right to lifers pushed the new law convinced that the appointment of Chief Justice John Roberts and Justice Samuel Alito will tip the Court's balance and pave the way for overturning the 1973 Roe v. Wade decision legalizing abortion. Under the new law, doctors could get five years in prison for performing an abortion.

Indiana right to lifers want to enact a similar law in Indiana. Rep. Troy Woodruff (R-Vincennes) introduced a bill similar to South Dakota's new law, but it stalled in the House. A majority of Hoosiers oppose such a ban according to a recent Star poll, which found 51% of Hoosier oppose a ban on abortions, while 39% support a ban on abortions. That poll, however, will not deter legislative efforts here.

The Star reported, "The debate is more than academic. State Sen. Jeff Drozda, R-Westfield, said he expected the Indiana General Assembly to vote next year on whether the state should outlaw most abortions. 'I strongly support legislation that would allow hearings and debate on this issue. What we're seeing is a national trend,' said Drozda, a former executive vice president of Indiana Right to Life, an anti-abortion group."