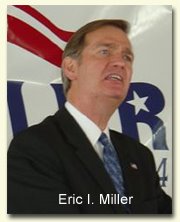 Another session of the Indiana General Assembly may have just come to a close, but our scrutiny of a State House fixture for the past quarter century will continue on. The Grand Dragon of Moral Righteousness Eric Miller has filed Advance America’s Form 990 tax return (finally) for the 2004 calendar year, albeit somewhat late (filed on November 11, 2005—nearly 6 months after it was due on May 15, 2005). And boy is it loaded with more evidence of self-dealing, deception and obfuscation by the man who makes it his business to regulate everything that goes on in your bedroom and then some.

Remember that 2004 was the year that the twice married and childless Miller challenged Mitch Daniels for the Republican gubernatorial nomination. Miller devoted the first part of the year through the May primary election criss-crossing the state in that shiny new RV manufactured by Newmar, which is owned by Miller’s largest campaign contributor, Mahlon Miller. You have to figure then that Miller was too busy running for Governor to continue working for the 501(c)(3) nonprofit organization he founded, which is barred under federal tax laws from engaging in partisan political activities. If that is what you thought, you guessed wrong. Miller pulled down close to the same salary in 2004 from Advance America as the organization reported paying him in 2003, and he continues to engage in blatant acts of self-dealing as we have previously reported on.

Advance America’s Form 990 filed with the IRS shows that Miller was paid $87,779 in compensation, and it contributed $16,000 to his employee benefit plan, for a total package worth $103,779. That compares to his 2003 reported salary of $93,070, plus $14,000 the organization kicked into his employee benefit plan or a total package worth $107,070. That’s a difference of just $3,291 in a year when Miller was occupied full-time with his gubernatorial race for nearly five months of the calendar year. Prior to 2003, Miller was consistently paid a salary in excess of $100,000 annually. The organization reduced his salary in 2003, but instituted a generous employee benefit package to offset the reduction in his salary.

Miller, who has traditionally served as the group’s executive director, stepped down from that position in 2003 as he began spending more time running for governor. He brought on Dwight Williams, a retired insurance lobbyist, to take over as executive director and Miller assumed the esteemed title of “Founder.” Although Williams’ position had been a highly-paid position when Miller occupied it, Williams was paid a mere $24,000 for his services in 2004. So why is the “Founder” making so much more than the “Executive Director” who is presumably in charge of the day-to-day affairs of the organization?

Miller also paid his own law firm, Miller Waters Martin & Hall, a legal consulting contract worth $114,000, a practice he has engaged in since 1998. As we reported previously, Miller told an Indianapolis Star reporter last summer, who was looking into the questions we raised here about Miller’s self-dealing, that the legal consulting contract was not for his own work; rather, it was to compensate other members of his firm for work they did in support of Advance America’s legislative efforts. However, Miller’s firm and the other attorneys did not register to lobby on behalf of the organization, and the organization did not attribute the payments to the law firm on either its tax returns or its lobbying activity reports, which it filed with the Indiana Lobby Registration Commission.

When you combine Miller’s salary, his employee benefits package and the payments made to Miller’s law firm, the organization paid a total of $217,779 to Miller and his law firm. That amount represents 30% of the nonprofit organization’s expenditures for 2004. And that amount doesn’t include the $14,140 Advance America paid for auto expenses, or the $10,031 it paid for employee parking, both of which Miller personally benefited from.

Another very troubling practice of self-dealing is Miller’s use of his sharing of the nonprofit organization’s business office at 101 W. Ohio Street, Suite #660, which is prime office space just one block from the State House, with his law firm. This is how the organization’s tax returns explain the practice to the IRS:

Another continuing problem with Advance America’s tax reporting and its lobbying reporting in Indiana is it gross under-reporting of its actual lobbying expenditures. The 2004 reporting period was no different. According to its 2004 tax return, lobbying for federal tax purposes comprised just $17,033 of its overall expenditures for the year, or just 2.3%. Of that amount, only $3,236, or less than 1% is claimed by the group to be for direct lobbying expenditures, which is what it reports to the Indiana Lobby Registration Commission. The balance, or $13,797, was spent on grassroots lobbying to influence public opinion.

When you consider the organization’s omnipresence at the State House during each legislative session, these reported lobbying expenditures are just not credible. We have raised this issue in past reporting. As we noted then, Miller sent e-mail alerts to the group's supporters throughout this year's legislative session in which he requested contributions to support the group's lobbying efforts. In an e-mail dated January 20, 2006, Miller told supporter that "[Advance America's] legislative expenses will exceed $160,000". Even by Miller's own account the group is under-reporting its lobbying expenditures.

Miller and his organization are constantly preaching fiscal restraint and consistently oppose higher taxes, arguing that government should live within its existing means. But when it comes to its own fiscal affairs, Miller could use some fiscal discipline of his own. In 2004, the group’s expenditures exceeded its revenues for the year by 15%, or $93,951.

But Miller has some deep pockets to reach into every time he finds himself in a financial squeeze. According to the group’s tax returns, a single contributor donated $150,000 to Advance America in 2004, which is nearly a quarter of the $634,000 the group raised in contributions and other sources. Who is this contributor? Could it be Mahlon Miller, the multi-millionaire RV mogul. He gave Miller over a half million for his gubernatorial race, which represented 63% of all his campaign contributions. As we previously reported, Miller lobbied for passage of a sales tax break this year on behalf of Advance America, which benefited the RV industry.

Two other contributors kicked in $50,000 and $40,000, respectively, which means the organization received 38% of its revenues from just three sources. Its top 10 contributors represented just over half of the group’s total revenues for 2004. The group’s tax return doesn’t tell us whether these contributions were made by individuals, businesses or even churches. What is clear is that contributions to the group are tax-deductible because it is a qualified 501(c)(3) organization.

For Miller, there is little oversight within his organization. Its board of directors consists of the same eight men he has appointed year after year, in addition to himself and Williams. They are ministers and theologians concerned more about the group's "moral agenda" rather than the nuances of the business and legal requirements for running a nonprofit.

The evidence of Miller’s blatant misuse of a nonprofit entity for his own self-serving ends, and to advance his own partisan political agenda in violation of IRS rules is overwhelming. It is time for someone in the mainstream media to report on Miller’s breach of the public trust. We thought we could count on the state’s newspaper of record, the Indianapolis Star, but we were apparently mistaken. Because Advance America’s activities are subsidized by taxpayers, there needs to be a full accounting of this group’s and its leader’s activities. Someone at the IRS, the U.S. attorney’s office or the Marion Co. Prosecutor’s office has to investigate this man and his organization. Or does the refrain attributed to the infamous KKK Grand Dragon D.C. Stephenson while he was still riding high--“I am the law in Indiana”--belong to Miller now?
Posted by Gary R. Welsh at 8:56 PM

Thanks for reporting this. Apparently The Indianapolis Star is to close to Advance AmeriKKKa to report on this abuse. Perhaps someone with The Star is one of Advance AmeriKKKas' contributor.

thanks for being about the only person in media to report on this guy. i guess we can't expect the star to have any guts in this matter.

Thanks Alan. Matt Tully tells us that he will pass the story along to his editors. Let's see if they act this time--since they passed on an earlier look at Miller by another reporter.