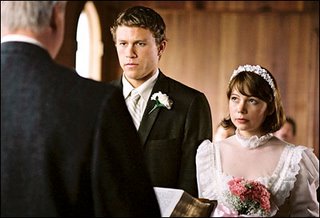 Such marriages are not just artifacts of the closeted 1950's. In the 16th century, Queen Anne of Denmark had eight children with King James I of England, known not only for the King James Bible, but also for his devotion to male favorites, one of whom he called "my sweet child and wife."

On the whole these are not marriages of convenience or cynical efforts to create cover. Gay and bisexual men continue to marry for complex reasons, many impelled not only by discrimination, but also by wishful thinking, the layered ambiguities of sexual love and authentic affection.

One wife's account in the article seems to be a common reaction. "I had no suspicions whatsoever. He's very masculine looking. It's not like he had Barbra Streisand or show tunes on." At least one expert doesn't think a woman marries a gay man by accident. "Straight people rarely marry gay people accidentally. Some women . . . find gay men less judgmental and more flexible, while others unconsciously seek partnerships that are not sexually passionate."
Posted by Gary R. Welsh at 7:47 PM

Now there's a stereotype I'm quiet sure most gay men would just love bearing the burden of...what a hoot!