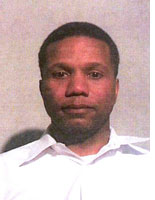 NOMINEE FOR U.S. COURT OF APPEALS
Until a few weeks ago, Claude Alexander Allen worked as a domestic policy adviser to President Bush. Prior to that, he served as the number two person at the Department of Health and Human Services and was twice nominated by President Bush as judge of the 4th Circuit Court of Appeals. Yesterday, he was charged with stealing more than $5,000 worth of merchandise from a Target store by claiming phony refunds according to ABC News:

Allen has been under investigation since at least January for the alleged thefts on 25 different occasions at Target and Hecht's stores, a police spokesman, Lt. Eric Burnett, said. Police reviewed his credit card records to track his purchase.

Police believe Allen would buy items, take them to his car, then return to the store with his receipt. He would select the same items, then take them to the store return desk and show the receipt from the first purchase. Using that method, he would receive credit for the second items on his credit cards, Burnett said.

Allen was allegedly seen Jan. 2 at a Target in Gaithersburg taking items off the shelf that he then took the return desk. He had a receipt for the merchandise, was given a refund and left. The items he allegedly received fraudulent refunds for include clothing, a Bose theater system and stereo equipment. Some purchases were as little as $2.50.

Before joining the Bush Administration, Allen served as the head of Virginia's Health & Human Resources department, and he once served as a press aide to former Sen. Jesse Helms (R-NC). During confirmation hearings for his nomination to the 4th Circuit Court of Appeals, ABC reported that "Allen was questioned about his use of the word "queer" when he was a press aide to Sen. Jesse Helms in 1984. Allen said he didn't intend it as a slur against gay people."

Allen abruptly resigned his job at the White House on February 9 saying that he wanted to spend more time with his family according to the administration. Slate.com notes that a Washington Times story "speculated that the 45-year-old aide, a noted social conservative, might have quit to protest a new Pentagon policy about military chaplains."

According to the ABC News report, he has been under investigation by police since early January. It just goes to show that the people you least suspect of stealing are sometimes the worst offenders. This guy could do some time in prison for his crime and lose his license to practice law if convicted.
Posted by Gary R. Welsh at 9:26 PM

Without question, anyone using the descriptor “queer” in 1984 intended it as slur on queer folks.

If I were a lawyer, I’d definitely what to check the most likely/least likely thinking. I’d be concerned that it just might detract from my ability to determine motivation. Such as, the high probability that the suspect is suffering from the mental illness kleptomania.

Isn’t determining suspect motivation/intent critical to effective defense and prosecution—or am I just guilty of watching too much TV...lol!

Or, could it be that it was more like: Hey--I've got a law degree from Duke, I work for the President and I deserve more than this lousy $130,000/year I'm earning allows me to live on. Stealing is stealing--it's only when it's a more educated or more affluent person that people want to make excuses for their behavior. I don't see why he should be treated any differently than a poor inner city guy who gets caught stealing.

Ok, that’s close enough to the kelptomania definition to work for me.

A.I.: “…-it's only when it's a more educated or more affluent person that people want to make excuses for their behavior.”
Stereotyping…

A.I.: “I don't see why he should be treated any differently than a poor inner city guy who gets caught stealing.”

I made no judgment on how either should be treated by the justice system. Rather, I simply addressed how I thought a lawyer would best serve his/her clients interests.

Yep, by definition, kleptomaniacs have an obsessive impulse to steal regardless of economic need.

Given Smith’s resources and public position, illness aside, he needs to be held to a higher standard with maximum sentencing imposed but I doubt that will happen.

Ooops, my reference was to ALLEN not Smith.