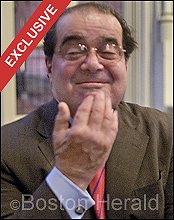 Despite Scalia’s insistence that the Sicilian gesture was not offensive and had been incorrectly characterized by the Herald as obscene, the photographer said the newspaper “got the story right.” Smith said the jurist “immediately knew he’d made a mistake, and said, ‘You’re not going to print that, are you?’ ” Scalia’s office yesterday referred questions regarding the flap to Supreme Court spokeswoman Kathy Arberg, who said a letter Scalia sent Tuesday to the Herald defending his gesture at the cathedral “speaks for itself.” “He has no further comment,” Arberg said. Smith was working as a freelance photographer for the Boston archdiocese’s weekly newspaper at a special Mass for lawyers Sunday when a Herald reporter asked the justice how he responds to critics who might question his impartiality as a judge given his public worship. “The judge paused for a second, then looked directly into my lens and said, ‘To my critics, I say, ‘Vaffanculo,’ ” punctuating the comment by flicking his right hand out from under his chin, Smith said. The Italian phrase means “(expletive) you.”

You read that right. The term "Vaffanculo" is an Italian cuss word for "fuck you."
Posted by Gary R. Welsh at 4:10 PM

Not that it really makes any difference to the story, but "culo" is Italian for "asshole" (the body part, not a figure of speech about a person as it often is in English).

The expression "vaffanculo" is considered an Italian "fuck you," but the literal translation is "go and stick it in your ass."

Either way, Scalia is a scumbag.