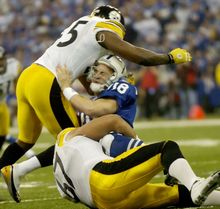 The Indianapolis Colts' 21-18 upset loss to the 6th seed Pittsburgh Steelers is a little hard to take. This is the team whose offense is led we are told by one of the best quarterbacks of all time, Peyton Manning. He has the best receivers in the NFL to complement his adept passing skills, and it's still not enough. If this Colts team can't produce a Super Bowl win, can any Colts team under Manning's command do it?

Let's face it, Manning has never won the big game in his entire football career. New England's Tom Brady is not rated nearly as well as Manning as a quarterback, but he has delivered on several Super Bowl wins for his Patriot fans with much less fanfare. Yes, Manning did show a lot of poise in rallying the team to within a field goal away from a tie ball game with less than a minute to play in the game, but had he performed up to par in the first half, the team wouldn't have found itself in that dire predicament.

Unfortunately, many will try to lay blame on Manning's nemesis, Colts' kicker Mike Vanderjagt, for his failure to connect on a 46-year field goal attempt. Manning could even be seen grinning widely as Vanderjagt failed to convert, seemingly gleeful of the prospect of someone other than himself bearing the brunt of the blame for the loss. Of course, the prospect of a tie ball game was only made possible by the field goal Vanderjagt successfully kicked earlier in the game. The real blame for the team's loss must be borne by Manning. He's paid the big bucks to lead the team in tough games like today's. He didn't deliver, and he certainly did not live up to his reputation. Then again, maybe he did live up to his reputation.
Posted by Gary R. Welsh at 4:51 PM