Lawmakers Run For Cover On Health Care For Life Benefit 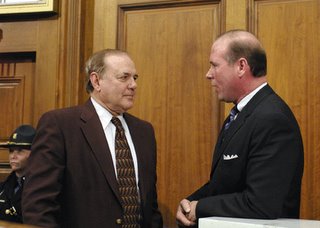 Indiana lawmakers appear to be running for cover after bloggers turned attention this week to the mammoth-sized liability taxpayers face to cover the cost of a “health insurance for life benefit” lawmakers awarded themselves with, along with their spouses, surviving spouses, children and even ex-spouses according to the Howey Report. We reported on Howey's initial story earlier this week about how some House and Senate sources were putting the potential liability of the benefit near $1 billion. Howey writes:

House Speaker Brian Bosma, reacting to what appears to be a politically explosive issue in an election year, said he may address the legislator health care for life issue administratively. Bosma told WNXT’s Abdul in the Morning that it is his intent to “drastically alter the program” soon. “A number of changes will be in place over the next couple weeks,” he said. “I do not think this is an appropriate benefit. It will be changed administratively. The program will be very different for those who are elected in 2006 as opposed to those elected in 2004.” Bosma said that those receiving the benefits - which includes the entire legislative branch - may continue to do so even after administrative changes. “We are learning you cannot alter benefits for those already getting those benefits.” Bosma said that discussions with leadership in both the House and Senate have been difficult. “This is still with land mines,” he said.

While Bosma’s efforts are commendable, his claim that you cannot alter the benefits for those legislators already receiving the benefits is dubious to say the least. As the Indiana Law Blog writes, “That is interesting; big corporations have been able to do so.” The statute itself seems to say otherwise as well. “[T]he eligibility of a former legislator to continue insurance under this section ends when the former legislator becomes eligible for Medicare coverage as prescribed by 42 U.S.C.A. 1395 et seq. or when the employer terminates the health insurance program.” I.C. §5-10-8-8.2(e). It also seems odd that Bosma claims he can take care of the problem administratively when the right itself was created statutorily.

Howey offers some strange political reaction to changing the benefit:

Meanwhile, some House Republicans are saying that changes in the benefits for legislators and staff, their spouses, ex-spouses and children could trigger a number of House retirements. And it places a number of freshmen Republicans in an awkward position. State Rep. Troy Woodruff used some of the same material of legislative perks such as health care for life in his race against Democrat incumbent John Frenz in 2004 that State Sen. Brent Waltz used against Senate Finance Chairman Larry Borst. The Borst and Frenz upset defeats signal the potential volatility this issue could inject in the 2004 election cycle.

Okay, now let’s get this straight. Lawmakers are going to retire if you take away a health care benefit which did not even exist when most of them were elected to the General Assembly? If we could all only be so lucky. Don’t hold your breath on that one. Advance Indiana is betting that the vast majority of lawmakers wouldn’t hesitate to vote for the repeal of this benefit if it were put to vote because of their fear of losing a job they very much want to hold onto. They would be tripping over themselves to hit the green "Yes" button. Advance Indiana doesn't think Bosma's going to be getting much help from Senate President Pro Tem Bob Garton on this one though. He'll have to be dragged kicking and screaming to get him to agree to taking away any legislative perk.

It is interesting how much this story is getting played by the bloggers—and rightfully so we might add—while the MSM sits asleep at the switch.

UPDATE: Indiana Law Blog has an excellent step by step analysis of how the legislature arrived at the current benefit over a series of legislative maneuvers. It notes that one of the legislative changes "prohibited the House speaker, Senate president pro tempore and Legislative Council from revoking post-retirement insurance coverage, once offered. Only a vote of the entire General Assembly can revoke it." It sound like a legislative vote is in order Mr. Speaker.
Posted by Gary R. Welsh at 3:32 PM

Thank you so much for posting this information. It is so disgusting to see that though many Hoosiers go without health care coverage, our lawmakers are making sure they will always have coverage on our dime. Pathetic.