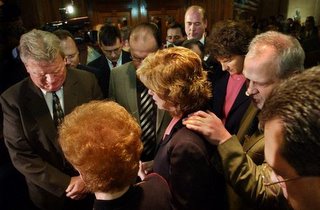 As the media and spectators packed the House chambers, House Speaker Brian Bosma continued to milk the House prayer case for all its worth as the House opened its business today for the 2006 legislative session. Avoiding an outright defiance of Judge David Hamilton’s court order that the House refrain from allowing clergy to deliver sectarian prayers during the opening invocation, Speaker Bosma nonetheless chose to flip the finger at Hamilton. In lieu of the formal invocation, Bosma and about 20 other legislators gathered “voluntarily and informally” at the back of the chamber of the House prior to the call to order to pray in accordance with their own beliefs without “censorship” or without “coercion.”

In describing his dilemma, Bosma began by saying this was “not a typical start” of the session due to “events outside of our hands.” Is he for real? The situation is entirely of his own making. He has made it abundantly clear that he intends to use the issue to make himself a Christian martyr, while at the same time advancing wedge issue politics to stir his conservative base and raise political contributions.

To further add to the circus-like atmosphere, Bosma claimed that he invited four pastors who had delivered the invocation for the House in the past, along with the instructions for delivering prayers in conformance with Judge Hamilton’s order. Bosma claimed that all four clergy told him that they could not deliver a prayer in “good conscience” within the court’s order. It’s a pretty good bet that Bosma extended those invitations only to Christian fundamentalist ministers who side with him on the issue. There are no fewer than a couple of dozen clergy in the city of Indianapolis alone who would have gladly stepped forward and delivered a non-sectarian prayer, as each of them has on many occasions in the past in a variety of public settings, including the House of Representatives.

In reaching his decision on whether to openly defy Judge Hamilton’s order, Bosma explained that a talk with his own children convinced him he had to comply with the order. That sounded as inane as former President Carter saying that he discussed nuclear proliferation with his 10-year old daughter Amy during his 1980 debate with Ronald Reagan. Bosma said he believed it would be sending a wrong message to children to disobey the law. We are after all a “nation of laws and not men [and nowadays women]” he added. He likened the consequences of his defying the order to a husband defying a no-contact court order involving domestic violence with his spouse.

In a manner Judge Hamilton described as “willful obtuseness,” Bosma pretends that he is being asked to do something that no other person in public office has been asked to do. He continued to personalize the disagreement with Judge Hamilton, who he says decided that he is “entitled to control House prayers” for the first time in the 199-year history of the General Assembly rather than the constitutionally-elected Speaker. “Religious freedom” and “freedom of speech” are the rights Bosma asserts that he is trying to protect. In reality, Christian intolerance of the pluralistic society in which we live is the only right he is seeking to protect.

Bosma reasserted his intention to fight the ruling by every constitutional means through his appeal to the 7th Circuit Court of Appeals and, if necessary, the U.S. Supreme Court.
Posted by Gary R. Welsh at 2:13 PM

He really needs to be removed. I read with great interest that the state would not give extra money to aid people that could not afford their high heating bills (said they didn't have it) however, the state does have the money to waste on this insane BS. Daniels is so good at slashing costs, why doesn't he pull the reins on the money sucking that Bosma is creating?

TRIB has just posted an analysis of how this issue is subverting other more important issues. Your blog's post is cited.