Is Garton About To Be Dethroned? 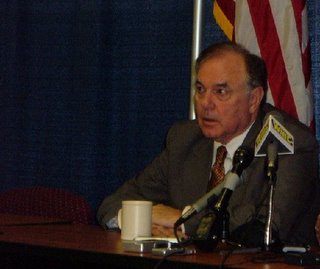 In the last election differing Republican interests gathered to topple the long-time chairman of the Senate Finance Committee Larry Borst (R-Indianapolis) in the Republican primary with a little-known candidate Brent Waltz. With the announcement at week's end that the longest serving Senate President Pro Tem in Indiana's history, Robert Garton (R-Columbus) will have a primary opponent, it appears those same forces may be coalescing to bring about a similar fate to Garton.

The Howey Political Report tells us that Greg Walker, an accountant from Columbus, filed the necessary papers with the Secretary of State on Friday to challenge Garton in District 41. Garton has never had a serious primary challenge since joining the Senate 36 years ago in 1970, and he has rarely had a serious general election opponent. If Garton isn't running scared yet, he should be.

Garton has never endeared himself to the Christian right. He struck out a moderate position early in his Senate career when he fought for the passage of the Equal Rights Amendment, parting company with many of his more conservative Republican colleagues. Throughout the 80s and 90s, his more moderate views seemed welcome by his Republican colleagues, but in recent elections the complexion of the Senate Republican caucus has turned decidedly more conservative. He has been able to successfully vanquish opponents within the caucus. Most recently, he backbenched former Senator Murray Clark after he unsuccessfully sought to oust him as Senate President Pro Tem. Some speculate that was the impetus for Clark's surprising departure from the Senate before the end of his term.

During the current session Garton has appeared to show a willingness to open the floodgates to more controversial legislation sought by the Christian right, which he traditionally bottled up in committee in an effort to placate their growing influence within his caucus. He's taken their line on gay marriages and Christian prayers in the General Assembly as just two examples. But it is unlikely to be enough to erase the image he has created in the minds of these folks for more than three decades now.

Looking at his opponent's press release announcing his candidacy, it is hard not to see the handwriting of folks like Eric Miller and Micah Clark. He touches on family values, home schooling (his children are), his faith in God and his support of religious freedom and the right to own guns. Here's a flavor of what he had to say:

I respect the commitment Senator Garton has made to serving in the capitol building for these past 36 years. However, the senator has not been opposed in a primary election bid in twelve years. I offer myself as an alternative in the Republican primary. What makes me a viable candidate? Firstly, my cherished wife of 17 years, Allison, and our four children Michaela, Andrew, Hannah, and Rebecca form a strong and loving family unit, which is the foundation of any strong nation. My wife and myself home educate our four children, teaching them character, virtue, and faith are more important than personal fame, wealth, or power. The manner in which one manages his household reflects leadership abilities more than do public accolades and awards. My faith in God governs my convictions. I am pro-life, because our Creator has given humans their worth as living souls. I believe in taking personal responsibility for one’s actions, and personal liberties should prevail as long as one behaves responsibly. This truism dictates that I support the second amendment, and I support the right to choose education options for one’s family without oppressive regulation. Revisionist judges should not secularize religious expression in Indiana.

It is likely that Walker will not only have plenty of grassroots support from the Christian right in getting out the vote for him in the May primary, but he will also likely have money from disparate Republicans. That would probably include the likes of former Indiana State GOP Chairman Rex Early, who was instrumental in helping Brent Waltz raise big bucks to challenge Larry Borst two years ago. Since semi-retiring from politics, the curmudgeonly Early has been settling scores with old political foes. Senator Garton is said to be among those foes just as Borst was.

Garton's enemies will have plenty of political fodder with which to chip away at him. The worst albatross he faces is the ridiculously self-serving health insurance for life benefit he and his fellow lawmakers created for themselves several years ago. In the face of the staggering liability and public outrage over the program, Garton has remained steadfast in his opposition to modifying the program. While his Republican counterparts in the House are putting forth a well-received plan to take the politics out of the drawing of legislative districts, Garton will hear nothing of it. A bill to implement much-needed lobbyist reform was deep-sixed by Garton in the Rules Committee without a public hearing.

Garton is also vulnerable to charges that he has used his political office to line his own pockets. For many years Garton earned a living giving motivational speeches to businesses. It just so happened that most of those businesses had business before the legislature, and there was at least an appearance that businesses were buying favor with him. He only gave up this gig after the Indianapolis Star put a spotlight on the unseemly practice. While he gave up that work, he accepted another high-paid position with a state-funded institution, Ivy Tech, whose budget he and other lawmakers control through the budgetary process. Three other lawmakers, including former House Speaker Pat Bauer (D-South Bend), Rep. Craig Frey (D-Mishawaka) and Rep. Bill Crawford (D-Indianapolis) are also on Ivy Tech's payroll.

If Garton is indeed toppled in the primary, his district could become competitive for the Democrats in the fall. As usual, they don't seem to have their act together in having any decent candidate at the ready in such an event. But that may change as well.
Posted by Gary R. Welsh at 3:06 PM

As a former employee of the Indiana State Senate, (Republican staff), I strongly believe that it is time for Senator Garton to go!!!!!!!!!! The God Complex that resinates from the Senate President Pro Tempes Office is sickening. Senator Garton is nothing more than a state level dictator. He rules the Senate, legislators and staff, with intimadation and the threat of Indiana's At Will employment law. This individual must be dethroned! It is time for the people of Indiana to be represented by someone who has their interests at heart, not their own!!! Wake up District 41!!!

As a Johnson County voter in District 41, I did indeed feel that it is time for Garton to go. The Bartholomew County voters let him win their county by 26 votes, but luckily Johnson County voters were able to turn the tide by 667 more votes against Garton. He had become so entrenched in his own self-interests that he could not and would not see that he was *the* problem in the General Assembly.