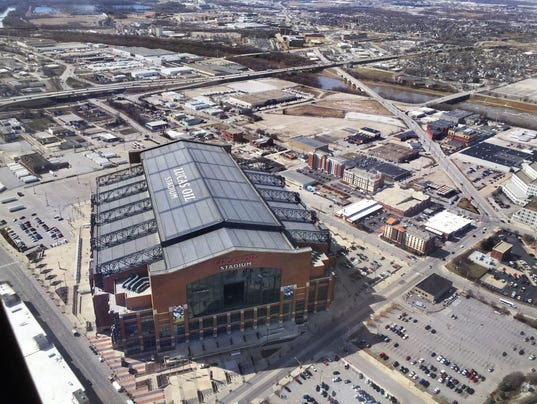 Officials for the Capital Improvement Board that leases Lucas Oil Stadium from the Indiana Stadium and Convention Building Authority and, in turn, leases it to billionaire Jim Irsay rent-free, still have no idea what caused steel bolts supporting the retractable roof to break off and fall into the stands during the Colts' final pre-season game 11 days ago to cause injury to three fans struck by the falling debris. While the investigation of the cause of the malfunction continues, CIB officials have decided the retractable roof will remain closed for the time being.

Colts owner Jim Irsay had ordered the roof opened at half time during the Thursday night pre-season game on September 3, not before the game had started. A change in NFL rules this season allows stadiums with retractable roofs to be opened after the game has commenced. A previous league rule required the roof, if opened, to remain open the entire game. "We're going to bring everybody together and make absolutely sure we do have the correct answer," the CIB's Barney Levengood told the Indianapolis Star. "That takes time."

Whatever it takes to determine the cause of the problem and repair it, we know one thing for certain. Jim Irsay won't be picking up the tab. Irsay demanded the retractable roof as an added feature after striking a one-sided stadium financing agreement the CIB entered into with the Colts and state officials, which omitted a source of funding for ongoing repair and maintenance expenses. The retractable roof added as much as $70 million to the stadium's overall $720 million initial cost. CIB officials later obtained state legislative authorization, which was approved by the City-County Council, to raise a series of new local taxes to pay for the ongoing maintenance and operating expenses. Food and beverage taxes had already been raised to pay for the stadium.
Posted by Gary R. Welsh at 6:57 PM

Bolts? I thought they were bags of pills and that's why Bloodshoot Jim was crawling around trying to pick them up.

Time for a new stadium. Little Jimmy should threaten to move the team.

That roof is unsafe. It should remain open indefinitely.

Whoever closed it needs to be prosecuted for interfering with an ongoing engineering investigation. Who did close it?

Is the City seeking indemnification from the builder?

With the stadium now being second-rate and nonconforming, this gives the Colts grounds to break the lease and head for a larger city, like St. Louis, when the Rams head for Los Angeles.

Anon 7:47, they have to close the roof because if it rains it will cause substantial damage to the interior. I remember reading that the CIB could have spent something like $100,000 more to make the inside waterproof, so the roof could stay open even if raining. They didn't want to pay that amount which seems paltry compared to the price of the stadium.

Then condemn the building, and play the games at IU.

I'd rather have the building destroyed than occupants killed.

The roof is the least danger to occupants fully open.

Paul Ogden is right about the roof staying closed but for the wrong reasons. The real reason is that the NFL wants a controlled environment for their games. That roof will never be opened again. Minnesota was smart just to build a dome without the fancy retractable roof. Houston has wanted to open their roof on numerous occassions and the league would not allow it. Something about humidity and oppressive temperatures that would have given the home team an unfair advantage. The NFL is a carefully scripted entertainment enterprise, sort of like pro rasslin'. No thinking person wastes more than a few minutes a week on it.

@ 10:56 No this roof has been engineered inadequately why else would we see bolt shear. They've had plenty of time to find out whats wrong, hell they know whats wrong. Its on some digital file deep inside Levengoods cib pc will we be able to see it, never you won't be able to see it though binoculars in person it has all tucked away like a dollar at Red Garter. Some engineer is feverishly working on a fix probably as I type. This roof reminds me of one at our world famous airport over the escalators. It will take someone to get killed first before they really fix it.