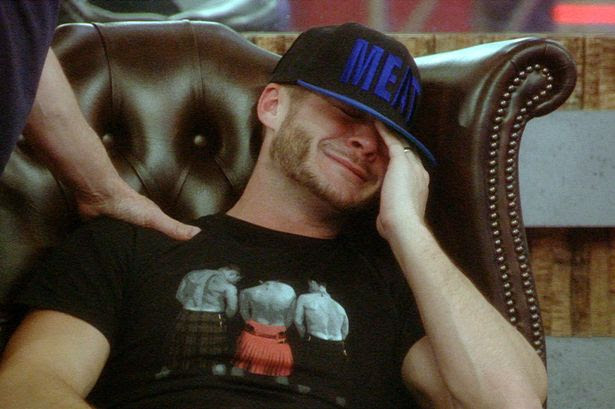 Internet traffic to Advance Indiana exploded over the past 24 hours so we checked the good ole Sitemeter application to see what was driving the traffic to the blog. Hits from Great Britain were off the charts searching old posts about Franklin, Indiana's pseudo celebrity/ reality TV cast member, Austin Armacost. Ugh!

Viewers of Celebrity Big Brother across the pond were apparently checking out old posts about the arrest and prosecution of Austin's mother, Karen, who is currently serving a 6-year prison sentence for embezzling over $680,000 from her former employer. Prosecutors alleged Austin's mother used some of the money she stole from her former employer to pay off her sons' credit card debts, including those belonging to Austin, although he claimed he had no idea she had paid debts owed on his credit cards. Interest in Austin's background piqued when he had an on-air meltdown in which he talked about having to "bury his brother" and "send his mother to prison."

These network executives know what happens when you put a group of self-indulgent, narcissistic and self-destructive people under one roof and put a camera on them 24x7 for the TV-viewing public's entertainment: dysfunction on steroids. Reality TV shows are relatively inexpensive to produce when you rely on has-been celebrities and wannabes who thrive on being in the public spotlight regardless of whether they have anything of value to contribute to the betterment of humanity. The cast members earn a few hundred thousand dollars for a few weeks' work putting on a live freak show that earns them no respectability in the minds of normal, breathing human beings.

Viewers of CBS's Celebrity Big Brother, which is being filmed in London, features pseudo celebrities from America and Great Britain competing to benefit their favorite charity. They compete in silly competitions and then nominate cast members for eviction from the losing team until they have a winner. How any respectable charity can accept money attained through such means is an entirely different subject. Armacost, is known mostly for being a former rent boy for fashion designer Marc Jacobs and a short run on the misnamed reality show, The A-List.

Armacost, who is gay and married, quickly become one of the show's favorites because he's not shy about baring it all and partly because of a bromance that developed between him and another house mate, the Apprentice's James Hill, who is supposedly straight. The two mates have shared a bed sans clothing and are constantly fawning over each other's mostly-naked bodies to the delight of the show's viewers, including Armacost's British husband. The F-bomb and name-calling seem to be daily rituals at the house based on highlights of the show uploaded to YouTube, but things took a nasty turn when Hill blindsided Armacost by nominating him for eviction this week.

His friendship with Hill being tested, Armacost accused him of lacking any balls and being brainwashed by one of his fellow American mates, washed-up super model Janice Dickinson, who received a warning in an earlier episode after she spat on Austin during an earlier row with him. But Austin saved his worst epitaphs for Dickinson, whom he referred to by the four-letter word beginning with "c" and described  as "a terrible example of a woman and a mother" whose "children would be so embarrassed." "You're f_ _ _ing the worst excuse for a woman ever." His petty insults against Dickinson continued to escalate. "What an embarrassment to society, [you] run around with your tits out and you’re spreading your legs." "“You’re just such a nasty excuse for a woman… miserable… who has to pop from reality show to reality show like you do to f_ _ _ing get a pay check. Get a job, learn a trade, get some education, you stupid f_ _ _ing bitch.” Pot calling the kettle black?

The word is "piqued."

It is appalling any reputable network would exploit people with serious mental health issues for ratings and profits. Reality TV has been taken way too far.