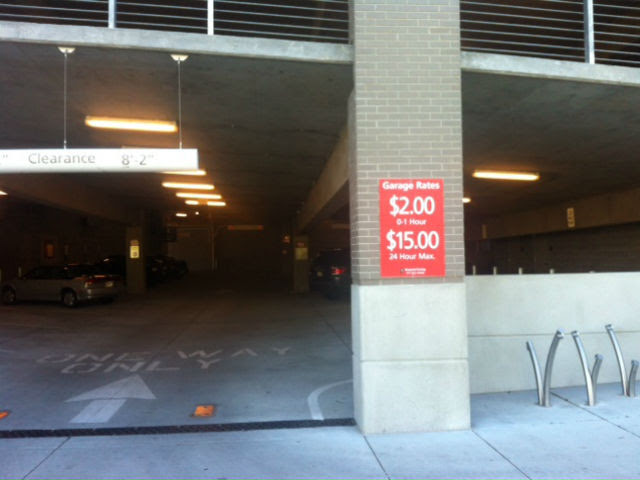 WRTV's Kara Kenney is back to work from her maternity leave and following up on her earlier reporting about the Broad Ripple parking garage built by Ersal Ozdemir's Keystone Construction with $6.5 million in taxpayer dollars. Kenney discovered that the parking garage was in violation of a city ordinance requiring the posting of signs outside disclosing rates charged for parking in the garage. After Kenney inquired about the ordinance violation, the owner posted the required signage. Tonight on RTV6 at 11:00 p.m., Kenney will have a more in-depth report on how many people are using the parking garage and why some argue it was a waste of money.

UPDATE: Kenney's video report is now posted online. Her report finds that the parking garage is being used very little by Broad Ripple visitors. While the developer refused to release figures to her, she found that only 5 to 20% of the garage's spaces were being utilized during periods RTV6 monitored its usage. Most of the retail space on the first floor remains vacant, including the space that was supposed to be occupied by IMPD as a neighborhood police branch. The report also found an elevator not functioning and water pooling inside the garage days after a rainfall. Mayor Ballard refused to grant Kenney an interview to discuss the merit of the $6.5 million taxpayers spent building the parking garage built and owned by one of his largest campaign contributors. She eventually caught up with him at a public event for a comment. "Everything takes a little time to work out. I certainly remember a few months after the Super Bowl where people were saying, 'Georgia Street, what's that?' But now, lots of people are using Georgia Street," said Ballard. After all, why would the City care how little the parking garage is used since it receives no revenues from it.
Posted by Gary R. Welsh at 3:37 PM