Richard Lugar defeated former Sen. Vance Hartke for re-election in the 1976 general election, winning 59% of the vote. About six months after taking office as Indiana's junior senator, Lugar and his wife Charlene sold their family home at 3200 Highwoods Court in Indianapolis to David and Sandra Gootee on July 6, 1977 and ceased to be residents of the state of Indiana. The Lugars made 7841 Old Dominion Road in McLean, Virginia as their new home not far from the nation's capital. Sandra Gootee spoke to certified fraud examiner Greg Wright on the telephone today about the home she and her husband purchased from the Lugars nearly 35 years ago.

David Gootee, who is suffering from brain cancer, was unable to talk to Wright. Sandra told Wright she and her husband learned the Lugars' home was for sale through a local real estate agent. When the Gootees closed on the purchase of their new home, only Charlene was present. Sandra recalled Charlene, who she described as "a nice enough person," insisting that a storage barn located on the property was not included with the sale. The Gootees were assured it would be removed a short time after the sale. Sandra indicated disappointment that the Lugars waited a few years before they got around to removing the storage barn.

The Gootees owned the former Lugar home on Highwoods Court until they sold it to David and Elizabeth Hughes in 1989. Sandra told Wright the Lugars retained no ownership interest in the property and did not rent any part of the home from the Gootees. When Wright told Sandra that the Lugars still voted, registered their vehicles and had Indiana-issued driver's licenses listing the 3200 Highwoods Court address as their residence, she was surprised. "I do not think that is right," she told Wright. Sandra described herself as politically "conservative", but she believed it was improper for the Lugars to claim as a residence a home they haven't owned since 1977.

Indiana's Secretary of State, Charlie White, has been declared by Marion Co. Circuit Court Judge Louis Rosenberg to be ineligible to run for the office to which he was elected in a landslide election in the 2010 general election because he allegedly "illegally" used his ex-wife's home where he formally lived as his registered voting address for a short period of time when he was nominated by the Republican Party as its candidate for secretary of state. A special prosecutor has charged him with seven felony counts, including vote fraud, marriage application fraud, mortgage fraud and theft because he claimed his ex-wife's home as his residence while serving on the Fishers Town Council. White could lose his job, face jail time and be stripped of his license to practice law if he's found guilty. Sen. Lugar and his wife, however, have been allowed to cast votes, register their vehicles and obtain driver's licenses while claiming a residence at which they haven't resided in 35 years. He is seeking re-election this year to an unprecedented seventh term. What's wrong with this picture? 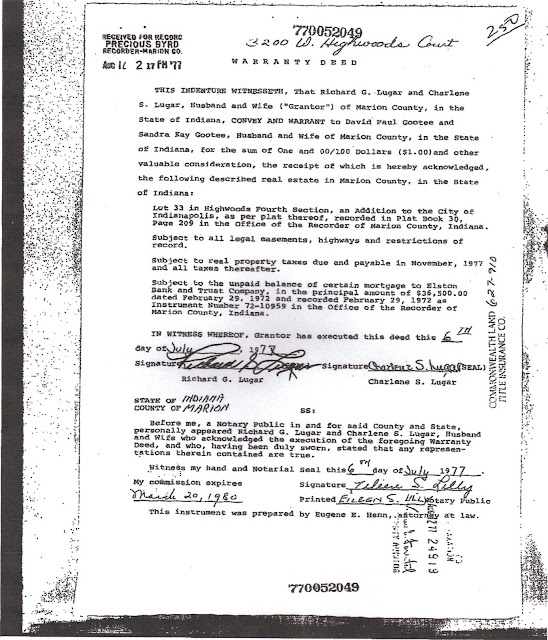