How Much Did Ener1 Bust Cost The Taxpayers?

Despite the Indianapolis Star's attempt to put lipstick on the pig that is Ener1, the electric car battery manufacturer, the use of federal, state and local tax dollars to prop up this private endeavor has turned into one big bust. The company this week filed for Chapter 11 bankruptcy. The Star went with reassuring statements from the company that there would be "no layoffs or workforce reductions. Instead, we're told the company will be back on its feet with a reorganization plan already in the works in no time. To get the real story, you had to look outside the state of Indiana. The Chicago Tribune's Julie Wernau provides this more accurate assessment:


The view from inside Think City's plant here is the worst nightmare for politicians betting on electric vehicles to drive job growth: 100 cars, most of them not finished, lined up with no word on their future.

Only two years ago the tiny Think cars (two can fit in a regular parking space) were expected to bring more than 400 jobs to this ailing city and a lifeline to suppliers who once made parts for gas guzzling recreational vehicles.

"We've said we're out to make Indiana the electric vehicle state. It's beginning to look like the state capital will be Elkhart County," Indiana Gov. Mitch Daniels said in January 2010 in announcing government incentives used to lure Think to his state.

Instead, the Hoosier state's big bet has been a bust. The plant is devoid of activity; there are just two employees. A Russian investor who recently purchased Think's bankrupt parent in Norway has been silent about its future. A government-backed Indianapolis battery-maker that was to supply Think wrote off a $73 million investment in the car company and Thursday declared bankruptcy. Two unrelated electric truck-makers that Indiana planned to nurture have yet to get off the ground.

Indiana's foray into electric vehicles is a cautionary tale for states in hot pursuit of high-tech manufacturing jobs. Think's story illustrates how politicians so badly wanted to stimulate job growth that they showered it and the battery supplier with tax breaks and incentives while at the same time failing to determine whether there was a market for the car: a plastic two-seater with a top speed of about 65 miles an hour and a price tag approaching $42,000.

The state of Indiana dumped a bunch of money in this company but is now claiming how much it gave the company is confidential information that can't be disclosed:

Indiana's total losses aren't immediately known. Katelyn Hancock, a spokeswoman for the Indiana Economic Development Corp., the state's economic development arm, declined to disclose how much battery-maker Ener1 and Think had received in taxpayer-funded credits and incentives, saying such information is confidential. Ener1 also declined to provide the information.

The Chicago Tribune did manage to put together this useful graph that gives a hint just how much in public dollars were dumped into this useless business. The Obama administration put $130.3 million in federal stimulus dollars that Sen. Richard Lugar helped obtain for the company. The state gave the company $21.1 million in performance-based credits and $200,000 in grants. The state gave another $7.6 million in performance-based credits to subsidiaries of Ener1, Think Holdings and Electric Motors Corp. Hancock County gave Ener1 $30 million in tax abatements and other incentives, and Indianapolis, Elkhart and Noblesville kicked in tax abatements to sweeten the incentives. 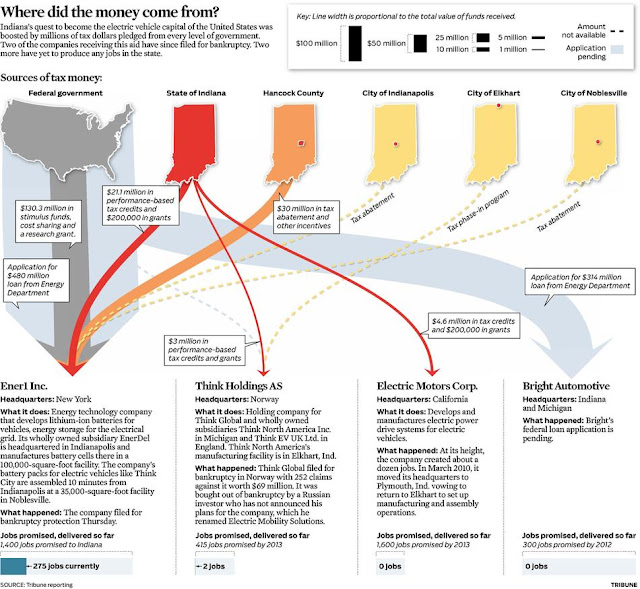 Email ThisBlogThis!Share to TwitterShare to FacebookShare to Pinterest
Labels: Ener1

If they're unfinished, are they cars?

Not really. Daniels has only appointed two judges to the Court of Appeals. Elaine Brown applied last year and performed sub par during the interview process. She didn't waste her time applying again. Bradford was Daniels first pick. Maria Granger is a very liberal Democrat. Daniels is never going to appoint her. Don't know why she wasted her time applying. Moberly is probably wasting her time. Word on the street is that she made some comments after losing out to David last year that will hurt her chances in getting favorable consideration from Daniels this go round.