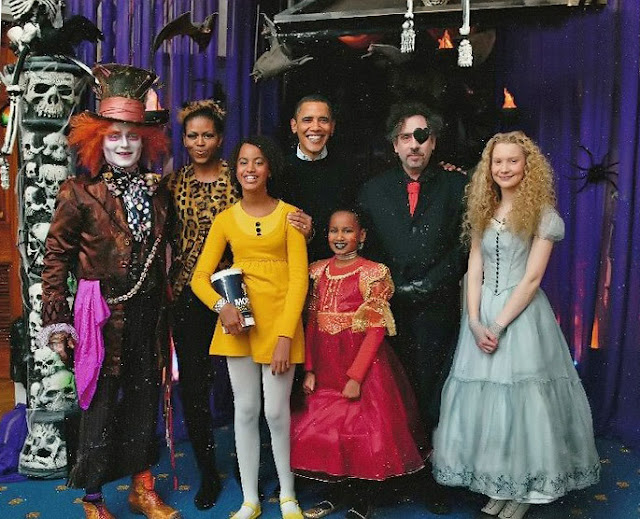 ﻿﻿
It seemed rather odd when Barack Obama took time out of his busy 2008 campaign schedule to record a plug for Ponzi schemer Tim Durham's son for his high school class president's race. It turns out Barack and Tim have much more in common than first meets the eye. As we've seen over the past four years, the Obamas flare for extravagant spending, royal vacations and lavish parties surpasses any presidency in the history of the Republic. Details of a new book describe a Hollywood-designed Halloween Party based on Alice In Wonderland. The re-created tea party in the State Dining Room of the White House featured film director Tim Burton's "creepy comic-style" decor, enormous stuffed animals seated at an authentic, antique table with fruit punch served in blood vials and actor Johnny Depp presiding over the affair in his original Mad Hatter costume. This was playing out as the nation's unemployment rate had topped 10% from the worst economic downtown since the Great Depression and Congress was in the midst of considering his controversial health care plan.

The book reveals how any official announcement of the glittering affair — coming at a time when Tea Party activists and voters furious over the lagging economy, 10-percent unemployment rate, bank bailouts and Obama’s health-care plan were staging protests — quickly vanished down the rabbit hole.

“White House officials were so nervous about how a splashy, Hollywood-esque party would look to jobless Americans — or their representatives in Congress, who would soon vote on health care — that the event was not discussed publicly and Burton’s and Depp’s contributions went unacknowledged,” the book says.

However, the White House made certain that more humble Halloween festivities earlier that day — for thousands of Washington-area schoolkids — were well reported by the press corps.

Then the Obamas went inside, where an invitation-only affair for children of military personnel and White House administrators unfolded in the East Room.

Unbeknownst to reporters, the State Dining Room had also been transformed into a secretive White House Wonderland.

Tim Burton decorated it “in his signature creepy-comic style. His film version was about to be released, and he had turned the room into the Mad Hatter’s tea party, with a long table set with antique-looking linens, enormous stuffed animals in chairs, and tiered serving plates with treats like bone-shaped meringue cookies,” reports the book, which The Post purchased at a Manhattan bookstore.

“Fruit punch was served in blood vials at the bar. Burton’s own Mad Hatter, the actor Johnny Depp, presided over the scene in full costume, standing up on a table to welcome everyone in character.”

The Obamas’ daughters, Malia and Sasha, then 11 and 8 respectively, “sat at the table, surrounded by a gaggle of their friends, and then proceeded to the next delight, a magic show in the East Room.”

If you feel like you are experiencing a deja vu moment, it's because of the striking resemblance the scene has to a lavish Halloween Party that Ponzi schemer Tim Durham threw at National Lampoon's Hollywood mansion at the very moment federal investigators were trying to unravel his scheme to swindle small investors in rural Ohio out of more than $200 million on that very same Halloween back in 2009. Durham dressed up as the Mad Hatter character from Alice In Wonderland.

Isn't it curious that such a lavish party could have been thrown at the White House during Obama's first year in office with nary a mention by anyone in the mainstream media? The Reagans couldn't host any event with anyone from Hollywood, even though both were Hollywood actors in their former lives, without unflattering stories by Washington reporters that they were out of touch with ordinary Americans and living too lavishly while Americans suffered through a recession. Have you ever seen Michelle Obama wear the same outfit more than once or wondered where all the money is coming from to permit them to live such a lavish life style? It's hard to believe that a mere ten years ago the couple was still swimming in credit card debt and living in a very modest two-bedroom condominium.
Posted by Gary R. Welsh at 5:19 PM