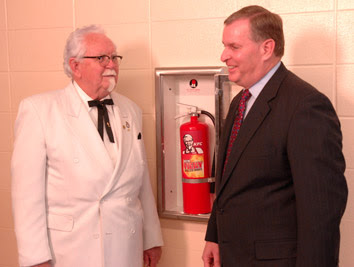 A frequent blogger critic of Mayor Greg Ballard often refers to him as Mayor McCheese. After today's announcement by his administration of a $5,000 advertising deal with Kentucky Fried Chicken, he might more appropriately refer to him as Mayor Chicken Wings. I'm not opposed to corporate sponsorships to help pay the bills, but this deal isn't worth the paper it's written on. KFC will donate $2,500 for 1,000 smoke detectors to hand out to the public and $2,500 for 150 fire extinguishers for use by Indy Parks. For God's sake, couldn't they find a person or business that would have simply donated the same amount of equipment without roping the Indianapolis Fire Department into peddling KFC's new "fiery grilled chicken wings?" As one commenter on the IBJ's site wrote, "If the city is going to pursue more such deals, I suggest that they find out what the value of sponsorships like this are." "$5k is way under valued for the promotional value that KFC is getting." What a complete joke.
Posted by Gary R. Welsh at 4:53 PM

I think a campaign like this should not be worth looking at for less than $250,000 when you factor in all the manpower involved.

The advertising cost is totally tax deductible to KFC.

Doesn't the city know that it can cost $5,000 a year for a mom and pop to run a classified in local newspaper or buy local internet advertising?

WHAT ARE THEY THINKING?

Obviously no one at the mayor's office actually consulted with advertising professionals or they would know what advertising is worth.

Makes me not want to eat at KFC or keep these same buffoons in office.

What's the shelf life of those fire extingishers that forever will have the KFC logo on them? Anyone thinking over there?

More mayor laughs - this link is included in the current issue of the city's newsletter.

As Eye on Indianapolis notes: tiny west-central Brazil, Ind., got 30 cents per person for its KFC involvement.

What a joke! As HFFT sez, "WHAT ARE THEY THINKING?"

How long do you think those chicken buckets and posters are going to last in certain neighborhoods?

This is so embarrassing! I really need to consider moving to Johnson County.

Doesn't matter if it's Republicans or Democrats, Indy politicians are all self-absorbed narcissists who are only loooking to line their pockets and the pockets of the friends and family--including children. Just like Deputy Mayor "O'Gin Weeyums" and his son Aaron.

Ballard's sure doing a Heck'uva job!

Hoosiers already are in a high obese category. I suppose I should not be surprised we're effectively condoning fried fast food places. I fail to see how this is in the public's interests.

There are so many ways for politicians to cheat the public.

Politicians should be required to tattoo the logos of their five biggest sponsors, er, donors, on their foreheads, so people know who runs the show.

WHO is going to remove the KFC signs? Remember the gas pumps that contained stickers of the Melvin Carraway, State Trooper, that threatened to arrest people who drove off without paying gass? There are still stickers on pumps today; years after he left that position.

I wonder what the firm working with the City got for setting up this windfall advertising campaign?

Even Salon.com is making fun of us!

Does Mayor Ballard want such ridicule? I mean, come on!