State Of The City: A Street Of Broken Promises 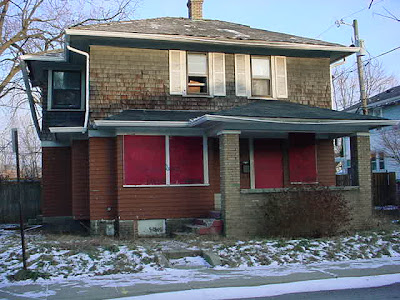 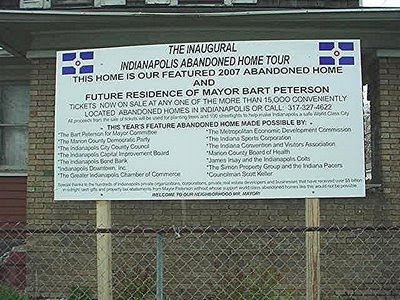 In 2007, this abandoned home at 97 N. Dearborn Street in the Englewood neighborhood on the City's Eastside became a symbol of all that was wrong with the administration of Mayor Bart Peterson. A fed up homeowner in the neighborhood erected this sign announcing "The Inaugural Indianapolis Abandoned Home Tour." Candidate Greg Ballard loved it and embraced it as a symbol of the change his campaign represented. It fit right in with his broken window theory about crime. The media reported on the sign's message. Mayor Bart Peterson wasn't humored by its message. He sent out city inspectors to remove it. Two years later, the home a family abandoned more than three years ago still sits vacant. More than $14,000 in taxes and fines remain unpaid. Despite the fact that it has been nearly three years since a tax payment was last made, the property has yet to be offered at a tax sale. The Treasurer's office says it was originally scheduled for last year's tax sale but it got pushed back another year due to continued delays in the property tax billing cycle. Mayor Ballard's administration claims the house is on its top 25 abandoned home list, but the administration has taken no concrete steps to deal with the neighborhood eyesore.

The situation for this Englewood neighborhood has gone from bad to worse over the past two years despite all of Ballard's promises of action on crime and abandoned homes. A long-time business owner who provided a stable anchor at the corner of New York and Dearborn across the street from this abandoned home was found shot to death a couple of weeks before Christmas in 2008. Police found 73-year-old Johnnie Conner, the owner of Johnnie's Glass & Frames, shot multiple times in the middle of the day. Conner shared neighbors' concerns about crime in the area and reportedly tried to assist police in investigating criminal activity. Some neighbors fear his death may have occurred because he trusted the police. Police showed little interest in abating a nuisance crack house a few doors down on New York Street when neighbors complained. As one neighbor told me, an IMPD officer told him to move if he didn't like the neighborhood, he should move.
A check of criminal activity within a small radius around this abandoned house during the most recent 90-day period reveals dozens of criminal offenses against persons and property. Strong armed robberies, residential burglaries, auto break-ins, stolen vehicles and vandalism are common crimes. Instead of just one abandoned house on the block, there are many. Conner dutifully maintained five rental properties in the neighborhood. Since his murder, which remains unsolved, his homes have become vacant and are listed for sale. There are now as many as 11 abandoned homes within a short distance of one another. To put it bluntly, the neighborhood is on the brink of being completely lost.

Unlike the Peterson administration, Ballard has a large pot of money courtesy of the federal government. The City received a $29 million grant to address the abandoned home problem. Although it has doled out grant money to a variety of community groups, neighborhoods have seen little action taking place. Ballard foolishly put controversial former City-County Councilor Sherron Franklin in charge of his abandoned home initiative. After 14 months of accomplishing next to nothing, the Ballard administration quietly removed Franklin from her job and sent her back to IMPD. I spoke to Ballard's former Chief of Staff Paul Okeson about this problem abandoned house more than a year ago. He assured me that it was a top priority and that the administration would be taking concrete steps to abate the nuisance. Okeson told me that he would personally see to it that this abandoned home got dealt with. Okeson left the administration last month to take a job with a construction company that does business with the City without doing anything about the abandoned home Ballard had used effectively as a hammer against Peterson during the 2007 election.

Tonight, Mayor Ballard will deliver his State of The City address and boast about his successful efforts at reducing crime in our city. Don't expect the folks living in Englewood or many of the other older neighborhoods that form a ring around the City's downtown to buy into these claims. They live with a growing crime problem every day. The abandoned home problem has skyrocketed since Ballard took office due to the home mortgage meltdown and the downturn in the economy. Sadly, Ballard's attention has been focused on providing more money to the CIB, the ICVA, the Super Bowl Committee, et al. to spend on downtown sports and entertainment businesses. Ballard's answer to revitalizing the Eastside is to build a costly sports facility so a Super Bowl team can practice in it a couple of times before it is turned over to a school that neither needs it nor can afford to maintain it. A Street of Broken Promises. That pretty much sums up the state of the city under Mayor Greg Ballard.

UPDATE: In case you don't believe me that police would actually tell people in this neighborhood that they should move if they don't like it, check out this observation by Beth Murphy in today's Star about what Eastside residents told Mayor Ballard at a recent Mayor's Night Out meeting:

I don't know what I expected when I dropped in at one of Mayor Greg Ballard's Nights Out meetings at an Eastside church last night (Emerson Baptist, corner of Emerson and New York streets).

I did expect to hear residents express their deep pride in the Eastside. I didn't expect this comment from one neighbor: Police have told neighbors complaining about or reporting crime that "if they don't like it, maybe they should move."

Now maybe that's not a completely unreasonable comment. But it's not one an Indianapolis police officer should be saying, especially, as the commenter pointed out, when we shouldn't be driving out responsible residents and when some of them can't afford or don't want to move out of homes and neighborhoods where they've established roots.

The mayor wasn't happy. He told the crowd to report such comments to the district commander. (The officer's name conveniently appears on his or her badge.)

The police chief wasn't happy. Chief Michael Spears said: "It's disturbing to think that a comment like that would be made." And he also suggested reporting the incident.

Mayor Ballard, a native Eastsider, recognized the stereotypes that exist about the Eastside, even when, he noted, much of the crime often is on the Far Eastside or the Northeastside yet is reported as occurring on the "Eastside" by the media.

I'm wondering if a memo went out to all police officers the next day to stop telling residents they should pack their bags.

Points well made. I remember attending a neighborhood meeting in Fountain Square a few weeks prior to the election. Both Ballard and Peterson attended. I was struck by the glib answers and promises made by Ballard. The budget had lots of fat and it would be easy for an experienced manager like him to balance and to reduce taxes. We had too many vacant properties and he would establish a program to resolve them within no more than six months. Two years later we still have no leadership in the city, despite the immense help provided by the state and federal government.

Johnnie Connor deserves a memorial to be placed in his honor, in Englewood; Mayor Ballard, the contrary.

What goes around, often comes around. I wonder what the Mayor will do when the 2012 campaign comes and his opponent throws this neighborhood back in his face?

I remember when that sign went up. I might have been first to call Peterson's office to ask for my ticket to the Abandoned Home Tour. LOL!

This is the #1 problem in our city. We need to create INCENTIVES for people to buy these homes and renovate.

If the mayor wants to create jobs, why not create jobs for contractors, plumbers, electricians, for the construction trade?

There are lots of guys that used to do commericial work for builders that got stiffed by bankrupt builders. They haven't transitioned into residential service work either.

That's a LOT of jobs which could be generated if we loosened the anchors around those homes and made it irristable to investors and families to purchase and renovate.

Each day I become more and more convinced that our government really does not want to help our citizens and our neighborhoods.

But we have our priorities together enough to have two stadiums!