The Case Of The Missing Headstone 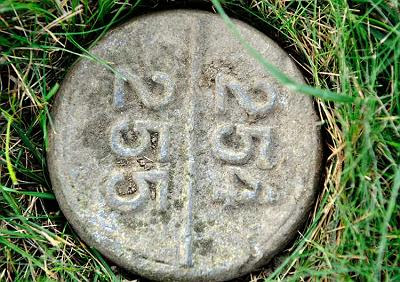 Damn, this is really harsh. First, Michelle Obama tells her press secretary to release a statement saying her father, Fraser Robinson, III, was buried in Burr Oak Cemetery, the nightmarish scene where cemetery workers have been digging up the dead for years to sell off new burial plots and to pocket the money for themselves. The White House quickly withdrew the statement after Cook County records revealed he was actually buried in Chicago's Lincoln Cemetery. Today, the Sun-Times reveals that Robinson's grave site is marked only by this numbered marker. Yikes, a bit embarrassing, don't you think? Columnist Michael Sneed is awaiting word from the White House on whether this was a family decision not to mark his burial site. Here's her generous take on this latest item:

Thank goodness First Lady Michelle Obama did not have to suffer the nightmare of having her father's grave disturbed, even though it was NOT located at the nightmarish Burr Oak cemetery -- despite an erroneous/quickly retracted report from the White House.

However, there is something, shall we say, troubling.

• • To wit: Sneed is told there is no headstone for the first lady's father, Fraser Robinson III, at the nearby Lincoln Cemetery in Alsip, where he is buried.

• • The big question: Is it missing? Was this a father's request? Or a family's decision?

We are awaiting a reply from the White House.

• • Meanwhile: Jennifer Brandino, a spokesman for Dignity Memorial Providers, which owns Lincoln Cemetery, tells Sneed: "I'm confident that our management at that cemetery is aware of [Mr. Robinson's] burial. Sometimes families choose for a grave not to have a headstone. But our company's policy would not allow me to comment on any one person's specific burial situation."

It sounds like Dignity Memorial Providers is a company with ethics and a company that respects the privacy of its clients. The final resting place for anyone is a decision for the family.

Yea, fuggs, but they usually know where they buried the body. And most people get a headstone (especially those with money).

...and does the lack of a headstone indicate some kind of character flaw or disrespect? I must be missing the point.

One would think a person who lives in a $2 million mansion, carries $6,000 handbags, and wears dresses and jewelry costing tens of thousand of dollars would have the common decency of purchasing at least a simple headstone with her father's name on it and his date of birth and death. The guy has been dead for 20 years. It's not like they haven't had time over the years to tend to this small matter.

The five to seven hundred dollar expense might put a strain on the family budget.
If the Obama's have any class its all low class.

IndyErnie, the more you write, the more your racism shows.....Almost all of my family has headstones but one uncle requestedd none and his request was honored. Does that make my family low class????

Well, there goes fuggs again, playing the RACE card.
It's the liberals first and last defense.
What exactly did indyernie say that is racist? Family budget? Low class? What?
People are getting SO tired of the race card being played constantly.