ATTENDS NEW YORK YANKEES GAME-SPENT $24,000 ENTERTAINING AT GAME
Gov. Mike Pence took a quick trip to New York City this week with a "delegation of Hoosier business leaders and economic development professionals" in an effort to coax businesses to relocate to Indiana to escape the "high-tax metropolitan area." The pork barrel Regional Cities Initiative approved by lawmakers this past session seemed to provide an extra impetus for the trip for some reason. Oddly, the only business leaders from Indiana who accompanied Pence and eight economic development staff folks on the trip are all executives at public utility companies. Those utility executives included: NIPSCO's Don Babcock, Indiana Michigan Power's Jim Finan, Duke Energy's Bill Petranoff, Hoosier Energy's Jeff Quyle and the Indiana Municipal Power Agency's Susan Reed. IEDC staff posted pictures of Pence in a corporate suite at a New York Yankees game where the home team was taking on the Boston Red Sox. 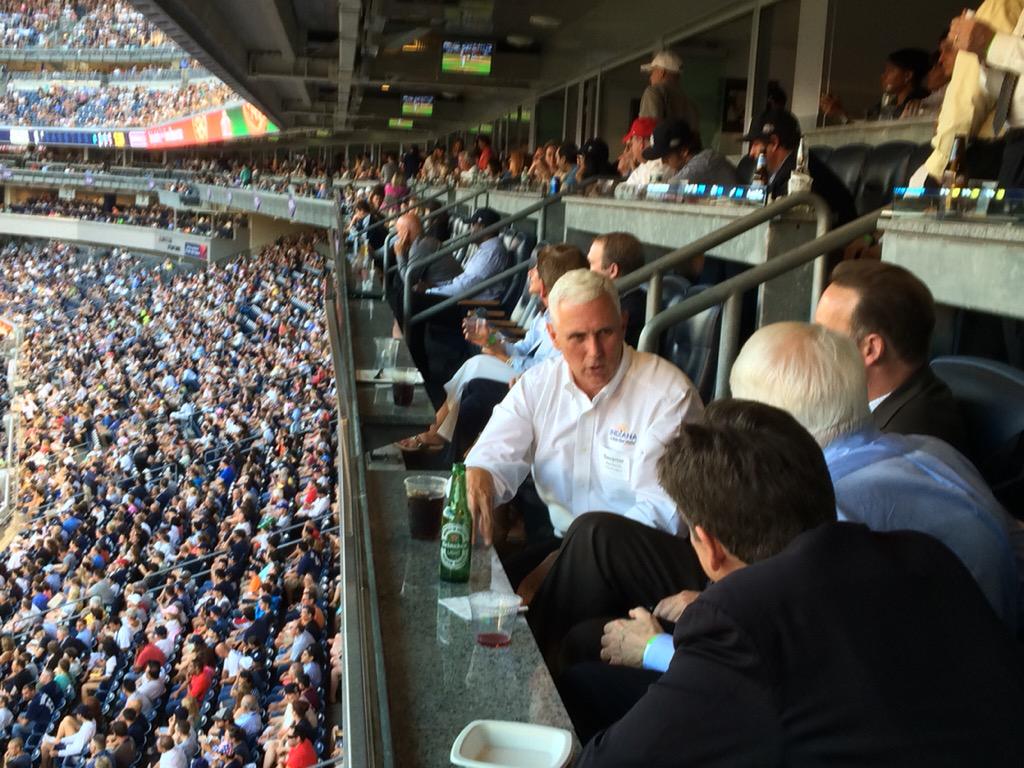 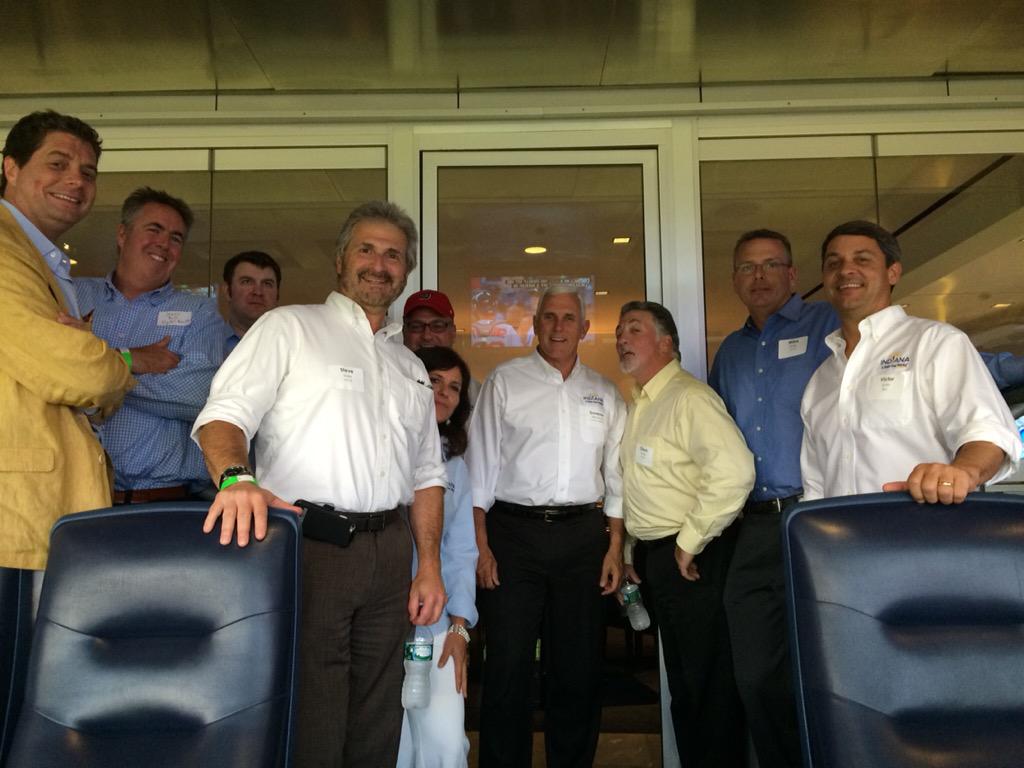 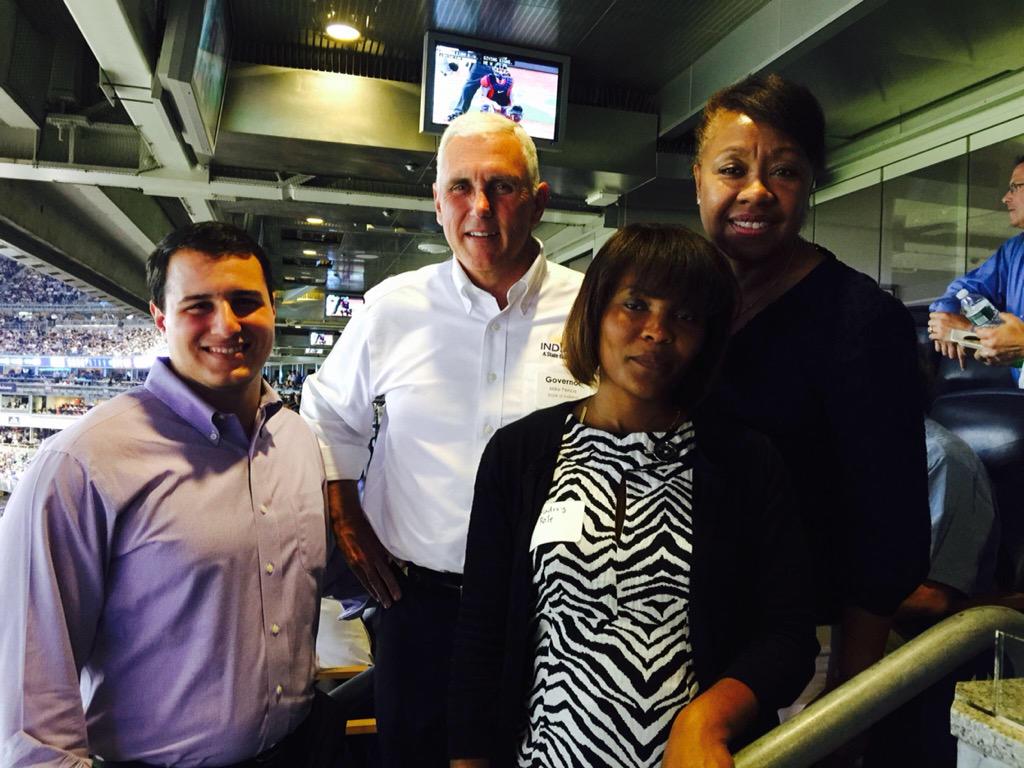 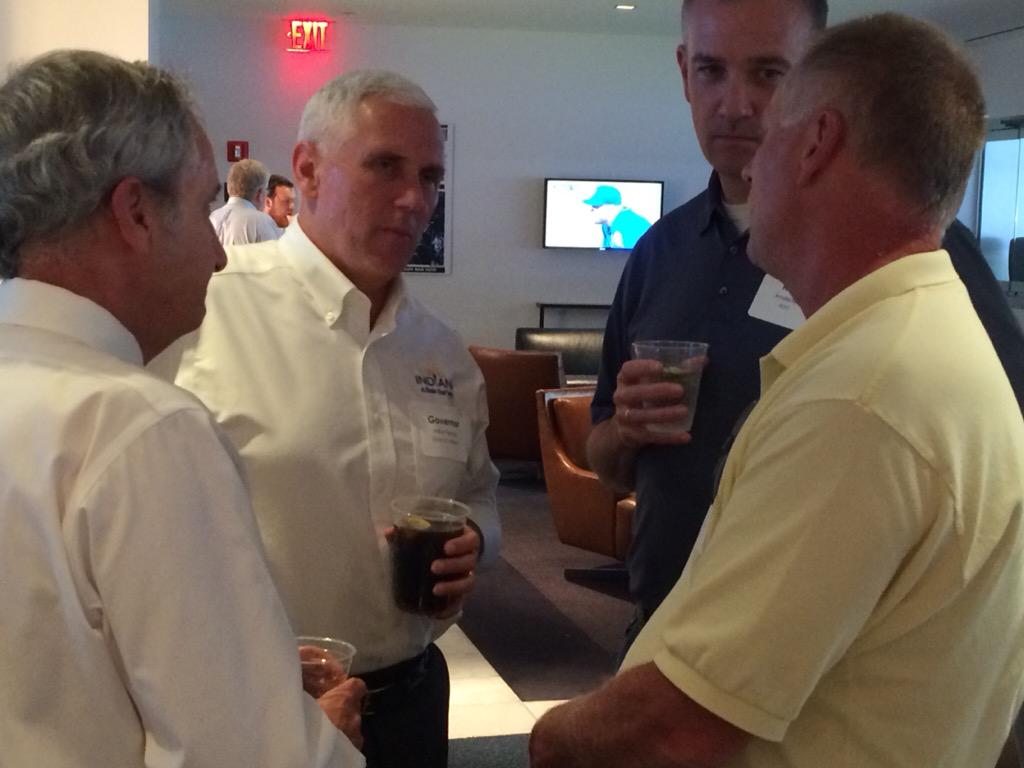 Why is Indiana spending $50G's going to ball games in Chicago, NYC and Atlanta (of all places)? https://t.co/T5gtLLXgdr
— Amos Brown (@Amoswtlcindy) August 6, 2015

UPDATE: The IEDC told the Indianapolis Star it spent $24,000 hosting business people at the New York Yankees baseball game outing during his trip to NYC. The tab covered the cost for 65 people to attend the event. Another $6,500 was spent on travel-related expenses. The IEDC says private donors picked up the tab for Pence's travel expenses, a highly unethical move that permits business interests to buy access and political favors from the governor. Nowhere in the Star article does it mention that only public utility executives were among the business leaders who accompanied Gov. Pence on the trip, in addition to the economic development staff members who traveled with him.
Posted by Gary R. Welsh at 12:52 PM

Nothing more than an EXCUSE TO TAKE A JUNKET AT HOOSIER "exsPENCE"!! Public company (CRONY) execs and Pence at the sports arenas. I am one shamed Republican with huge gubernatorial voter regret. My only consolation is that I will never, never again cast a ballot for Mike Pence for any office.

Everything in the state. Nothing outside it. Nothing against the state. They must be plotting Edwardsport II.

At least give us a quid pro quo. I'll gladly support the junket if you utility regulators will give us a break from the fracking water/sewer bills. Let me just say a word on behalf of the local landlording community, which is large and mostly retirees. Combined water sewer bills on 4plex properties are hitting $600 a month. Small apartment building owners are getting hammered. If they don't get utilities under control we will continue to see broad based rent increases in Indianapolis. Next year the average apartment rent will rise substantially. Our problem, Mr Ballard, started when Cary Lykins decided he could fix our water/sewer/fed compliance problem, and our Eskenazi hospital problem, and every other Indianapolis problem, while Williamsport and energy producers were costing us taxpayers billions. There are only so many taxpayers, and Ballard and Pence and the General Assembly better give us some relief, or we're going to have some serious inflation.

The water company issues are much deeper than Citizens Energy and Lykins. First, Mayor Peterson screwed us over by allowing NIPSCO to purchase the water company in intervention of a state law and then plundering the company and failing to invest in the infrastructure before Peterson later agreed to buy it back at an inflated price. Peterson and SerVaas then screwed us again by turning over management of the water company to the French company, Veolia, which hosed us even more. Citizens Energy came along and paid an inflated price to buy the water company from the city, along with a $30 million break-up fee paid to Veolia, so Ballard could pass out a half billion dollars to his campaign contributors ahead of his re-election campaign. It was much worse than East Chicago Mayor Pastrick's sidewalks for votes spending, but you didn't see our state's Attorney General bringing a civil RICO action against Ballard like he did with Pastrick and his goons. Much of the reason we're paying astronomically higher water and sewer rates has nothing to do with the long overdue infrastructure improvements.

Well I think we need some kind of taxpayer referendum on the subject of whether these water/sewer costs should be absorbed by the State of Indiana instead of passed thru to rate payers. I thought utility regulators were in place to safeguard the interests of the public, assuring that unreasonable rate increases would be disallowed. I don't know anything about the water/sewer bills in the rest of the State, or even in our doughnut counties. But its getting bad in Marion County. And in Detroit, where 1 in 3 homeowners is behind on these bills, they are shutting off the water now, even while the United Nations is calling that a humanitarian disaster. Doesn't get much press around here. But I think we are moving into dangerous territory when we start following Detroit's example. I have tenants moving out of rental houses and into apartments because they can't afford the water/sewer bills. And water/sewer bills on small apt buildings are larger than the gas budgets and electric bill combined. Its out of control. We aren't in drought. There's more water out there than we know what to do with. How come I'm paying thousands of dollars this year for water on a handful of properties?